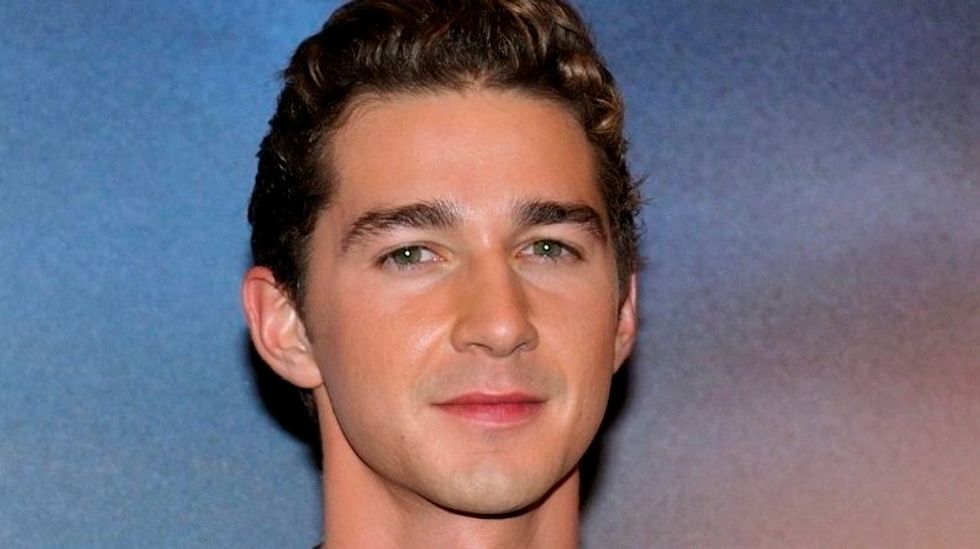 LaBeouf has gone from plagiariser to 'performance artist' in a matter of weeks. He's an ultimate internet and media troll

Harvard Business School should do a case study on Shia LaBeouf. He's gone from plagiariser to credible artist in a matter of weeks. The former child actor for Disney has more credibility now than in his decade-plus TV and bad action film career, and it's all thanks to his trolling spree involving the media, the internet, the entertainment industry, and now, the art world.

LaBeouf is is in the midst of a widely publicized #IAMSORRY exhibit in Los Angeles through Sunday. Wearing a paperbag on your head has never seemed so clever.

The press fascination began in December after it became known LaBeouf plagiarized a well-known graphic novel word for word and scene for scene in his directorial debut. But instead of disappearing in shame, he upped his bizarre antics – continued plagiarizing, weird tweets, skywriting, and now, paper-bag wearing act. Whether or not you buy his latest argument that this is all just "performance art", it's a winning strategy. Coverage from the likes of The Los Angeles Times and Time magazine has shifted the conversation from vilifying him for his serial plagiarism to "look at how eccentric he is!" and "Is he having a breakdown?" He's even being compared to award-winning actor Joaquin Phoenix.

It should come as a surprise to no one that his latest effort, #IAMSORRY, is not a complete LaBeouf original. It resembles Marina Abramovic's infamous 2010 MoMa exhibit "The Artist is Present". Unlike the plagiarized film HowardCantour.com, however, #IAMSORRY is more inspired than a direct copy. There are enough differences between the two that Abramovic didn't think they're related (she did call the whole #IAMSORRY spectacle "manipulative" when asked about it).

LaBeouf's version of "The Artist is Present" has him wearing tuxedo and a paper bag over his head and crying continuously in front of a single gallery-goer without making a sound. Before entering the exhibition, the viewer is allowed to pick an object significant to LaBeouf's life from a table – examples include a Transformers figure, a whip, a bowl of angry tweets directed at LaBeouf – to bring into their meeting with the actor. Lines to get into #IAMSORRY have wrapped around the block all week, with some gleefully waiting to berate the actor.

If #IAMSORRY's success is based purely on press and attendance, it's already hit that benchmark. More importantly, the performative piece itself is actually credible as a piece of art. The continued controversy surrounding LaBeouf provides a relevance and context for the show, and there's a real interactive element, with some journalists and fans literally touching LaBeouf by holding his hand as he cries or reacts. Some admit to crying with him.

As art, #IAMSORRY poses interesting questions on the nature of celebrity and what it means to be an actor. Is LaBeouf actually listening to what gallery guests have to say? Is he sincere in his crying, or is he just acting? (In one video of LaBeouf being yelled it, it looks like he is wearing beige ear plugs.) That important question didn't stop actor Keegan Allen from calling  #IAMSORRY "a beautiful piece of self-reflection" on his Instagram and urging his 1.2m Twitter followers to go see it.

At its most basic, art asks the viewer to feel, which #IAMSORRY fulfills by eliciting strong emotions from those in attendance. Andrew Romano at The Daily Beast wrote about his experience alone with LaBeouf after going in a second time:

In the moment after I took that picture, I actually felt something real. Something strange and complex. Something like sympathy ... there was more going on in those few seconds than in a lot of contemporary art. LaBeouf's look-at-me internet penance ritual had become an actual moment between actual people.

A British journalist working for the Independent also went in twice because, according to New York Magazine's Vulture, he didn't think he "did it right the first time". As for the Vulture writer, he describes the experience as "surreal" and found his voice was "so tremulous" immediately after leaving LaBeouf's presence. Kate Knibbs at the Daily Dot found #IAMSORRY "genuinely disturbing", and "felt like I was further dehumanizing someone whose humanity I'd discounted". Of the long line of people waiting to get inside, Knibbs writes, "we were torturers, waiting patiently to emotionally poke a troubled man".

LaBeouf's debut art exhibit has even been parodied by another former child actor Jerry O'Connell. In this digital remix age, being parodied is an important requirement to labeling anything viral or famous, especially anything one wants to deem art. By parodying #IAMSORRY, O'Connell has further legitimized it as a work of art, and by getting in on the media frenzy, O'Connell ensures the continued publicity of the original. As O'Connell told Buzzfeed:

Everyone's talking about it, whether you want to call it art or a real apology, it's hilarious.

The real connections people think they are having with LaBeouf inside #IAMSORRY might very well be fake, but that doesn't matter because as an art piece it is working: people are actually discussing the exhibit as a bonafide work of art., which is more than you can say about pretty much everything else LaBeouf has done to date.

So kudos, Shia, you can stop wishing on a star now.