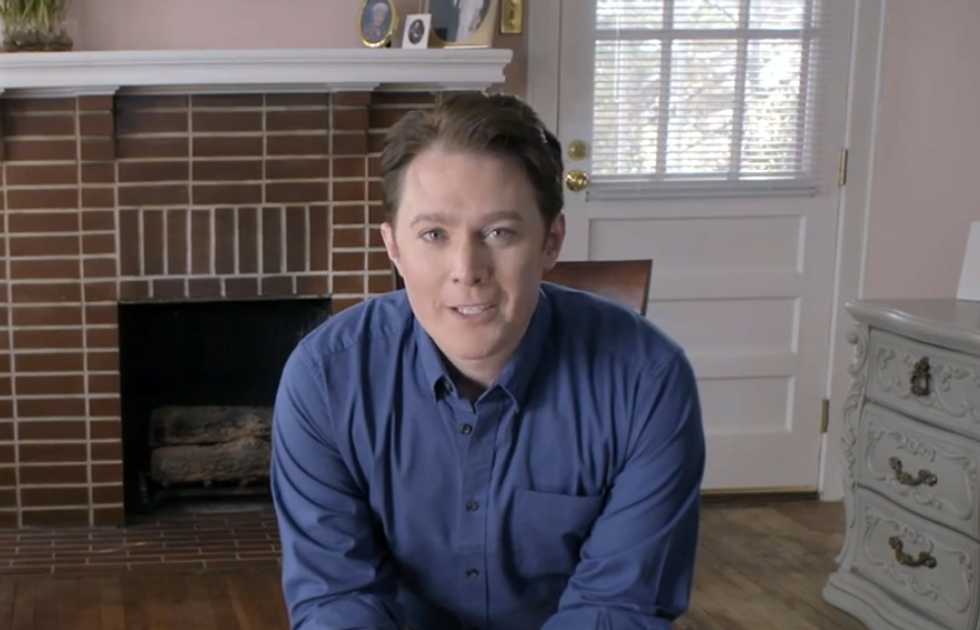 Singer and "American Idol" alumnus Clay Aiken announced this week that he is running for Congress in North Carolina's 2nd District.

In the announcement video embedded below, the openly gay singer recounted a period from his early years, when he and his mother lived on a friend's living room floor to escape Aiken's violent, abusive father.

"I was one year old," he said, "when my mother knocked on that door with only a diaper bag, the clothes on our backs and me in her arms. She needed a place to stay where she could escape my father and start a new life."

The two of them slept on a mattress on the floor, said Aiken, "In some ways, this is where my life really began, on the floor of a living room in a small North Carolina home where my mother and I only had each other. And she protected me. Not just from my father but from as many harsh realities as she possibly could."

Aiken said that he has decided to run for Congress because "I've been fortunate in my life, and if you only know the part of my story that begins with the 'Golden Ticket,' something that still seems unbelievable to me even to this day, you might wonder what would qualify me to run."

"Well, it starts with things I remember all too well," he said, "Mom working nights at Sears, clothes from the thrift store, Christmases where I might only get one small present."

School, he said, "was the one way I had to pull myself up, to achieve a dream I long had, to teach -- to reach children like me, and those who face even more adversities than I did."

Not everybody gets a "Golden Ticket," he said. "And here in North Carolina, we've felt more than our fair share of the pain" of the economic downturn and its aftermath.

Rep. Renee Ellmers (R-NC), who Aiken is hoping to challenge, went to Washington, he said, with the best of intentions, but has repeatedly voted against the economic interests of the state. She voted repeatedly for military cuts and in favor of the government shutdown, then had the audacity to complain that she needed her paycheck.

Of Republicans and Tea Partiers like Ellmers, Aiken said, "These folks hurt North Carolina. They hurt our military readiness and they let thousands of civilians at Ft. Bragg be furloughed; cuts to child care for 5,000 children that live on base" and more.

"I'm not a politician," Aiken said. "I don't ever want to be one, but I do want to help bring back -- at least to my corner of North Carolina -- the idea that someone can go to Washington to represent all the people, whether they voted for you or not."