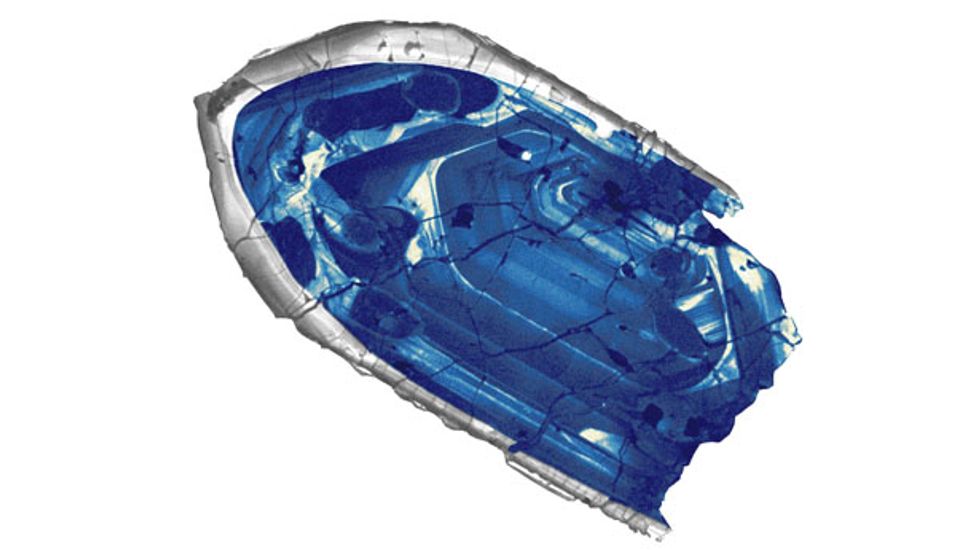 WASHINGTON (Reuters) - To put it mildly, this is one gem of a gem.

Scientists using two different age-determining techniques have shown that a tiny zircon crystal found on a sheep ranch in western Australia is the oldest known piece of our planet, dating to 4.4 billion years ago.

Writing in the journal Nature Geoscience on Sunday, the researchers said the discovery indicates that Earth's crust formed relatively soon after the planet formed and that the little gem was a remnant of it.

John Valley, a University of Wisconsin geoscience professor who led the research, said the findings suggest that the early Earth was not as harsh a place as many scientists have thought.

To determine the age of the zircon fragment, the scientists first used a widely accepted dating technique based on determining the radioactive decay of uranium to lead in a mineral sample.

But because some scientists hypothesized that this technique might give a false date due to possible movement of lead atoms within the crystal over time, the researchers turned to a second sophisticated method to verify the finding.

They used a technique known as atom-probe tomography that was able to identify individual atoms of lead in the crystal and determine their mass, and confirmed that the zircon was indeed 4.4 billion years old.

To put that age in perspective, the Earth itself formed 4.5 billion years ago as a ball of molten rock, meaning that its crust formed relatively soon thereafter, 100 million years later. The age of the crystal also means that the crust appeared just 160 million years after the very formation of the solar system.

The finding supports the notion of a "cool early Earth" where temperatures were low enough to sustain oceans, and perhaps life, earlier than previously thought, Valley said.

This period of Earth history is known as the Hadean eon, named for ancient Greek god of the underworld Hades because of hellish conditions including meteorite bombardment and an initially molten surface.

"One of the things that we're really interested in is: when did the Earth first become habitable for life? When did it cool off enough that life might have emerged?" Valley said in a telephone interview.

The discovery that the zircon crystal, and thereby the formation of the crust, dates from 4.4 billion years ago suggests that the planet was perhaps capable of sustaining microbial life 4.3 billion years ago, Valley said.

The oldest fossil records of life are stromatolites produced by an archaic form of bacteria from about 3.4 billion years ago.

The zircon was extracted in 2001 from a rock outcrop in Australia's Jack Hills region. For a rock of such importance, it is rather small. It measures only about 200 by 400 microns, about twice the diameter of a human hair.

"Zircons can be large and very pretty. But the ones we work on are small and not especially attractive except to a geologist," Valley said. "If you held it in the palm of your hand, if you have good eyesight you could see it without a magnifying glass."

(Reporting by Will Dunham; Editing by Meredith Mazzilli)