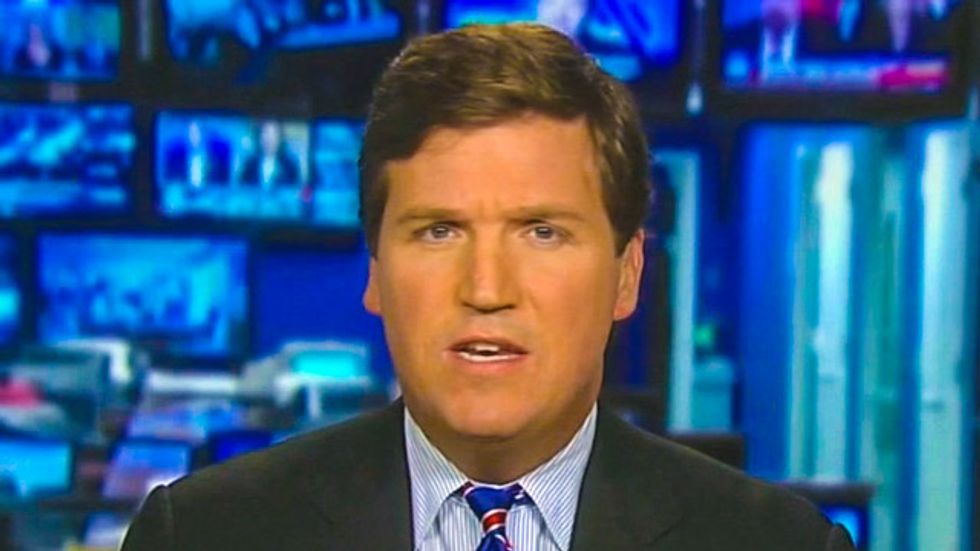 Fox News host Tucker Carlson on Wednesday said that the people criticizing an Arizona bill which would allow discrimination against LGBT people had gone too far, and that "fascism" was the only explanation for forcing businesses to treat everyone equally.

"I mean, if you want to have a gay wedding, fine, go ahead," Carlson told Fox News host Martha MacCallum. "If I don't want to bake you a cake for your gay wedding, that's okay too... That's called tolerance."

"But when you try and force me to bake a cake for your gay wedding and threaten me with prison if I don't, that's called fascism."

Fox News contributor Alan Colmes, however, observed that the Civil Rights Act of 1964 made it illegal for places of public accommodation not to serve minorities.

"Clearly we're in a moment of national hysteria here, where people who disagree get crushed," Carlson opined. "Who are these people who are pushing for the imprisonment of someone who just doesn't feel comfortable baking a cake for gay wedding. This is insane. Let's just be honest about it."

"What if I'm a business owner and I say I don't want to make a cake for a black wedding?" Colmes wondered.

"Everybody is always invoking that," Carlson complained. "It's ludicrous. There is, what, 3,000 years of opposition to gay marriage. This is not my view, but I think it's important to acknowledged that you can oppose gay marriage and not be a Klansman."

"Either you're open for business or you're not open for business," MacCallum argued. "But you can't pick and choose based on, you know, different criteria, anymore than a Muslim bakery can say, you can't come in here unless you have your head covered if you're a woman to shop here. You can't do that."

"Tucker, are you against the Civil Rights Act of 1964?" Colmes pressed.

"Don't bring this into this," Carlson snarled. "The bottom line is you are defending the use of government to crush people who don't want to bake a cake for a gay wedding. I'm just telling you that this has gone too far.

"And everybody in America is terrified to tell the truth, which is, this is insane. This is not tolerance. This is fascism."