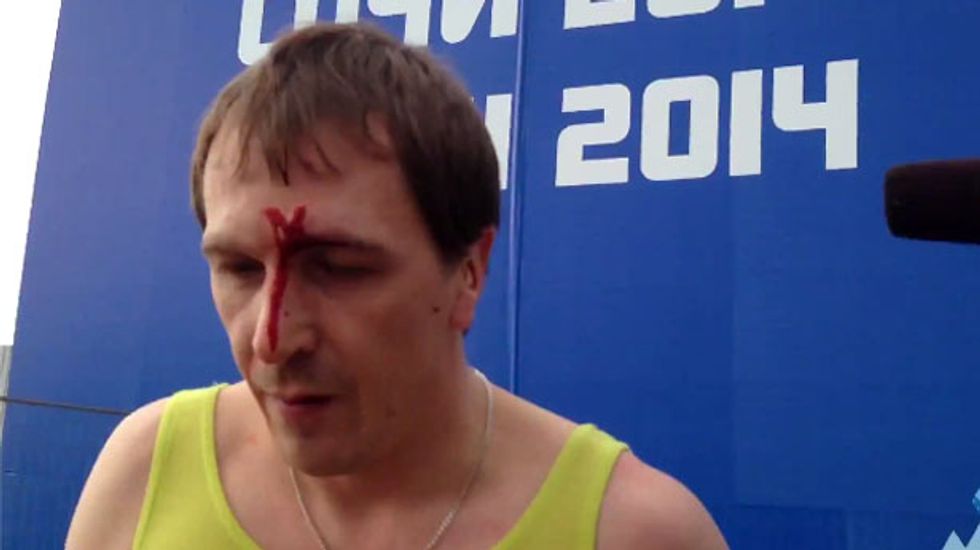 Russian punk group Pussy Riot on Thursday showed a new video filmed in the centre of Winter Olympics host Sochi, savaging President Vladimir Putin over the hosting of the Games and the rights climate in Russia.

The video, titled "Putin will teach you how to love the motherland," is the first music project by Pussy Riot members Nadezhda Tolokonnikova and Maria Alyokhina since they were released from prison colonies last year.

The pair have been in Sochi along with other Pussy Riot supporters all week. They were detained by police for several hours on Tuesday and beaten in scuffles on Wednesday which saw them roughly handled and whipped by Cossacks.

They presented the video in public for the first time on a laptop in a district of Sochi, surrounded by reporters but also pro-Kremlin activists who tried to drown them out.

"From the moment we entered this city we have been constantly detained by the security forces," said Tolokonnikova.

"According to the logic of the authorities, we should spent the maximum amount of time in this city locked up so we got absolutely nothing done," she added.

The video opens with the Pussy Riot members clad in their trademark coloured balaclavas, tights and dresses swimming in the sea off Sochi.

They are then seen singing and dancing in front of the Olympic rings in the centre of Sochi and trying to taunt a giant Olympic mascot, a furry snow leopard.

The video also shows Wednesday's footage of the women being beaten with whips and roughly handled in scuffles with Cossacks, who perform the role of vigilantes in southern Russia.

The Russian-language and highly colloquial lyrics slam the human rights situation in Russia, referencing the activists who are still jailed over a Moscow anti-Putin protest in 2012 and the jailed Sochi environmental campaigner Yevgeny Vitishko.

"They will teach you in the prison camps how to cry and how to obey/Salute to the bosses, and hi, il Duce," the song goes.

"The constitution is lynched, Vitishko's in prison/Stability, prison gruel, the fence and the watchtower.

"Putin will teach you how to love the motherland."

The song also refers to the heavy level of security in Sochi, saying "the Olympics are are under surveillance", as well as the pressure on pro-opposition TV channel Dozhd (Rain).

It also mentions the toilet cubicle with two lavatories at one of the Sochi sports facilities that caused hilarity ahead of the Games. "A two-ass toilet, a priority," it says.

Tolokonnikova and Alyokhina were sent to penal colonies on a two-year hooliganism sentence for performing an anti-Putin song in a Moscow cathedral in 2012.

However, they were freed early on amnesty in December last year.

The International Olympic Committee (IOC) warned the women on Wednesday that it would be "wholly inappropriate" to stage actions outside the Olympic venues.

However central Sochi is some 30 kilometres (18 miles) north of the main Olympic Park. The Adler district where they held the "punk" news conference is closer, around five kilometres away.

IOC spokesman Mark Adams said Thursday that the images of the beating of Pussy Riot were unsettling but reaffirmed that the Games "should not be used as a platform for demonstrations".

The governor of the local Krasnodar region which includes Sochi, Alexander Tkachev, vowed a full investigation into Wednesday's incident where the girls were beaten with horsewhips.

"The ideas of this group are not supported by the overwhelming majority of the population of the region," he stated.

"Nonetheless, absolutely all the guilty in what happened should be punished," Tkachev added.

Tolokonnikova wrote on Twitter on Thursday afternoon that the pair were at the airport and about to leave Sochi.