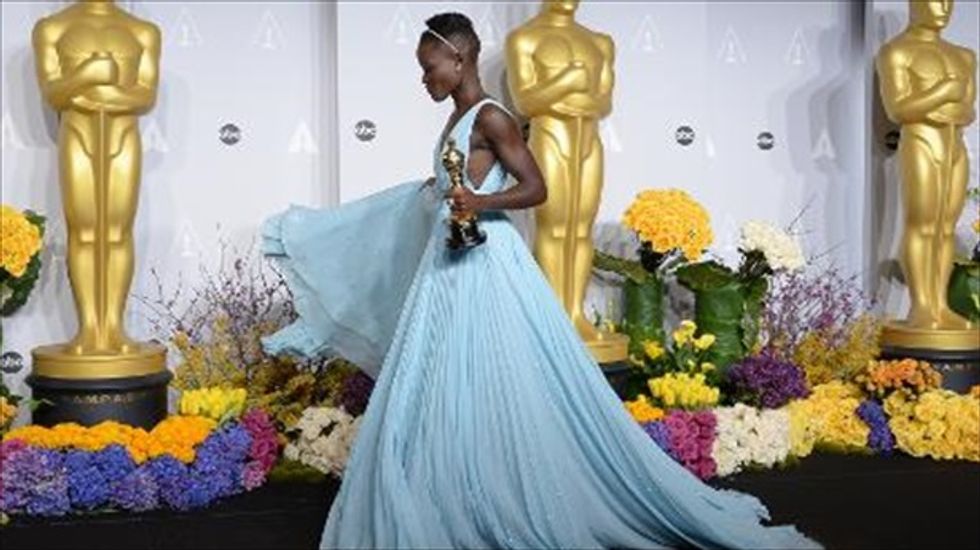 Lupita Nyong'o celebrates winning Best Performance by an Actress in a Supporting Role award for '12 Years a Slave' in the press room during the 86th Academy Awards on March 2nd, 2014 in Hollywood [AFP]

The 86th Academy Awards were seen by 43 million Americans Sunday, drawing the biggest audience of any entertainment program since the finale of hit sitcom "Friends" in May 2004, according to estimates by ratings service Nielsen.

The three-and-a-half-hour show averaged a 12.9 rating for adults aged 18-48, according to the preliminary figures cited by ABC, the Oscars broadcaster.

DeGeneres, hosting the Oscars for the second time -- seven years after her first turn -- ordered pizza, took a star-studded selfie and poked fun at her audience at Hollywood's biggest night of the year.

Following in the footsteps of celebrated Oscars hosts such as Billy Crystal and Bob Hope, the 56-year-old mixed wry, deadpan humor and cracked jokes at the expense of her A-list audience.

Her celebrity selfie with stars including Brad Pitt, Meryl Streep and Jennifer Lawrence had nearly 100,000 retweets within five minutes, and over 2.8 million by Monday morning.

The show's ratings were up some six percent from last year's show, hosted by comic Seth MacFarlane, who was accused of bad taste in some of his jokes.

While reviews overall were mixed, many critics lavished praise on DeGeneres, in particular for the way she spent much of the evening among the audience, rather than on stage.

"The show was trim, fleet, elegant, and organic, with few unnecessary bells and whistles; almost everything in it seemed to have a purpose," said Entertainment Weekly.

"Her real achievement, though, was to make the prospect of an Oscar host roaming through -- and interacting with -- the celebrity audience feel, for the first time, like a relaxed, fun, and totally natural thing to do."

"Choose a better host, you get a better show. Choose a really good host, as DeGeneres proved to be Sunday, and you get the best Oscar broadcast since, well, the last time she hosted," the newspaper wrote.

But not everyone was convinced.

"This year's Oscars was more like an endurance test -- turgid, badly directed, poorly produced and featuring an endless string of tired or wince-inducing moments from host Ellen DeGeneres," said the Hollywood Reporter.

The show's ratings increased for the third year in a row, while its share of 18-34 year-old viewers was a seven-year high, and of teenagers (12-17) was a three-year high.

The most-watched Oscars show ever was in 1998, when 55.3 million people watched "Titanic" win 11 Academy Awards including best picture as Crystal hosted, according to the Los Angeles Times.

This year's Oscars blasted Hollywood's other main awards shows: the Golden Globes in January were watched by 22.1 million people and the Grammys by 14.5 million, according to the Nielsen figures cited by ABC.