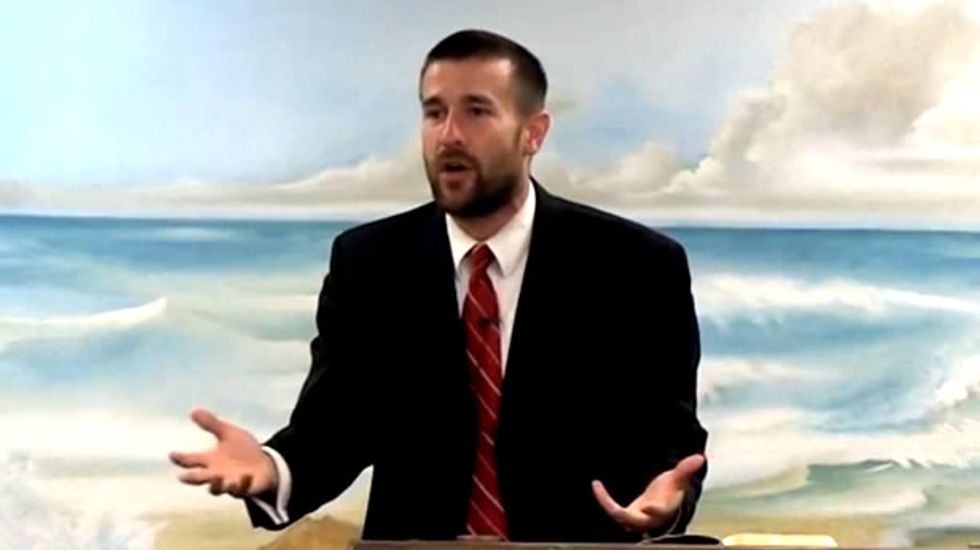 On Sunday, a pastor in Phoenix, Arizona implored his female congregants not to say "amen" in church.

Pastor Steven Anderson of the Faithful Word Baptist Church garnered national attention in 2009 when he told his followers that he prays for the death of President Barack Obama every night. After being contacted by the Secret Service, he insisted that he "didn't say he wanted his parishioners to attack the president, he did say the country would benefit from Mr. Obama dying."

Pastor Anderson first attempted to justify the silencing of women by quoting 1 Timothy 2:11, "[l]et the woman learn in silence with all subjection. But I suffer not a woman to teach, nor to usurp authority over the man, but to be in silence."

He then asked the congregation to flip to 1 Corinthians 14, which says "[l]et your women keep silence in the churches, for it is not permitted unto them to speak, as it is commanded to be under obedience as also sayeth the law. And if they will learn anything, let them ask their husbands at home: for it is shameful for women to speak in the church."

"Now obviously," he continued, "before the service begins, there's chatting and talking going on, that's perfectly legitimate. When we all sing praises to God, of course the ladies should also lift up their voices."

"But when it's learning time," Pastor Anderson said, hammering his lecturn, "it's silence time."

"This is why I don't believe women should say 'amen' during the preaching either. Because 'amen' means 'truly' or 'verily' ... it basically means 'that's true.' So when I'm preaching and I say something that you agree with and that you believe in, and you say 'amen,' you're saying 'that's true.'"

However, he added, "I was preaching one-time, and a woman actually disagreed with me in the middle of preaching. She said I was wrong, and you know, I kind of blew up at her."