Florida Rep. Alan Grayson accused of 'history of physical violence' against his wife 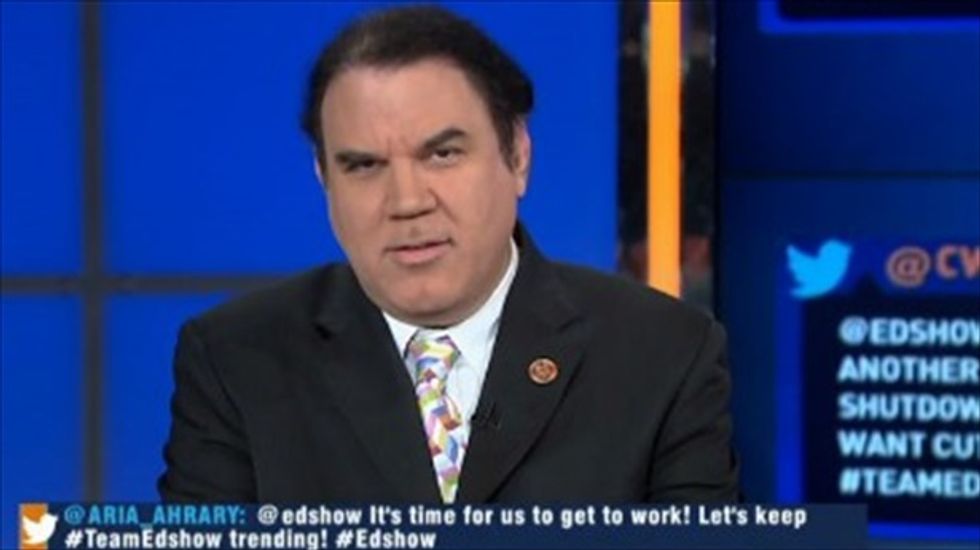 Rep. Alan Grayson's (D-FL) wife obtained a temporary protective injunction against him following an encounter at their Orlando home in which she said he attacked her, the Orlando Sentinel reported on Tuesday.

In her petition, Lolita Grayson said Grayson pushed her against a door, causing her to fall to the ground during a confrontation on Saturday. The petition also stated that Grayson had a "history of physical violence" toward her and "physically battered" her and the couple's two children "from time to time."

Lolita Grayson filed for divorce from the congressman in January 2014, calling their 24-year marriage "irretrievably broken."

The Orange County Sheriff's Office told the Sentinel that it is conducting a domestic violence investigation into the encounter. Grayson was not arrested on Saturday and has not been charged.

A spokesperson for Grayson's office described Lolita Grayson's accusations as "absolutely false, completely unfounded, and clearly designed to vilify and harm Congressman Grayson" in a statement to the Sentinel.

The petition states that Alan Grayson arrived "unannounced" at the house as Lolita Grayson was about to take the children to a play date, then asked her to speak with him in private. When she refused, the petition states that he pushed her against the door, at which point she fell. She subsequently pushed him in the face and kneed him in the stomach "in order to protect and defend herself." The congressman is also accused of telling her that he would "give her nothing" in the upcoming divorce and leave her "in the gutter," in front of the children.

A member of Grayson's staff, Juan Lopez, told the Sentinel on Tuesday that he witnessed the incident from 15 feet away, and that Lolita Grayson "charged" toward the front door as soon as her husband arrived and shouted obscenities at him. He said Alan Grayson "absolutely" did not shove or hit her.

"It's just unfortunate that this is happening and that she would say something like this," Lopez was quoted as saying.

Alan Grayson's office released a statement saying his wife had become "increasingly erratic" since filing for divorce, and that he was "profoundly pained by her accusations."

The injunction gives Lolita Grayson temporary custody of the children and possession of the home. It also forbids the congressman from contacting her. It will remain in effect until the couple appears in court on March 20.