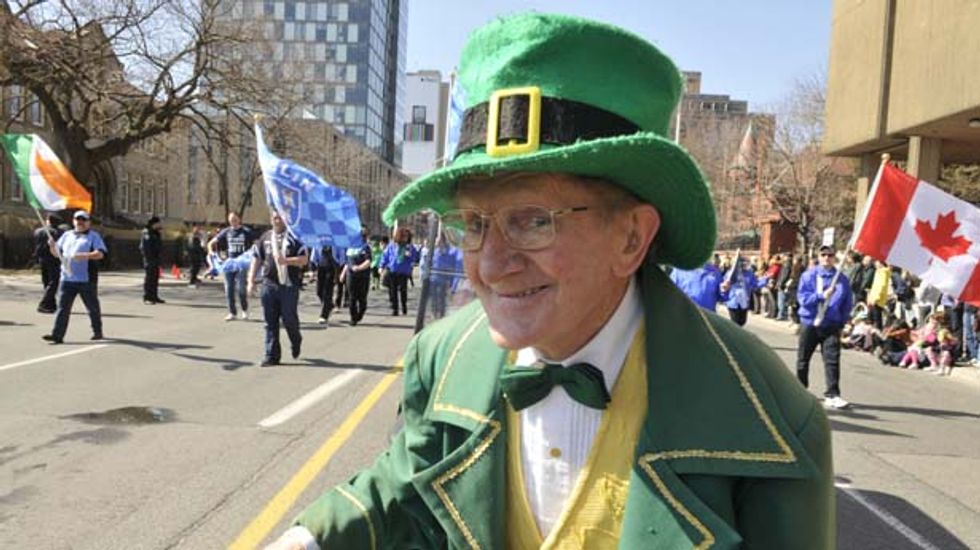 It was unclear, however, if marchers from MassEquality, one of the largest gay rights advocacy groups in Massachusetts, would be permitted to carry signs or use slogans identifying themselves as gay men and women, which may yet prove a sticking point.

"We don't ban gays, we just want to keep the parade an Irish parade," Tim Duross, the lead organizer of the parade that celebrates the city's Irish heritage and honors military veterans, said in a telephone interview on Saturday.

He cited parade rules banning political protest and references to sexual orientation, suggesting that MassEquality was established enough not to have to explain who they are.

"Everyone knows who they are," he said. "They're a good organization, they help LGBT veterans, and if they help veterans they're OK with us," he added, using an abbreviation for lesbian, gay, bisexual and transgender people.

MassEquality's application to participate in the March 15 parade - the group's fourth try in four years - was denied at first, said Kara Coredini, the group's executive director, in a telephone interview.

But the Allied War Veterans Council, also an organizer, reconsidered after Mayor Martin Walsh, the son of Irish immigrants, threatened to boycott the parade over the exclusion and began attempts to broker an agreement.

"That there is a conversation happening around allowing openly LGBT people to march in this parade is historic," Coredini said.

She and Duross will meet this week to see if they can agree on how MassEquality's marchers can identify themselves in the parade through South Boston. Coredini said the invitation would be meaningful only if their unit could march "openly."

Duross said he was open to a discussion. When asked if the rainbow flag, the unofficial symbol of the gay rights movement, might be allowed, he hesitated.

"If they put a pot of gold at the end of the rainbow and a leprechaun, then I think everyone would be happy," he finally responded.

A spokeswoman for Walsh said the mayor and U.S. Congressman Stephen Lynch, both Democrats, had another meeting with organizers on Saturday.

"It was a very positive meeting, and they remain optimistic that a solution can be reached that will work for all parties involved," the spokeswoman said in a statement.

Unsuccessful efforts by gay rights groups to join the parade began in the 1990s, and reached the Supreme Court in 1995. The court ruled in favor of the organizers, saying a privately organized parade was free to exclude groups, if they disagreed with their message.

In New York, Mayor Bill de Blasio and the City Council have said they will boycott the city's largest St. Patrick's Day parade this year because it bans gay pride signs.

De Blasio, who, like Walsh, took office as mayor in January, called the practice "discriminatory" and is the first mayor to take such a stance since David Dinkins, the city's last Democratic mayor, did the same in 1993.

[An old man sharing a laugh via Shutterstock]