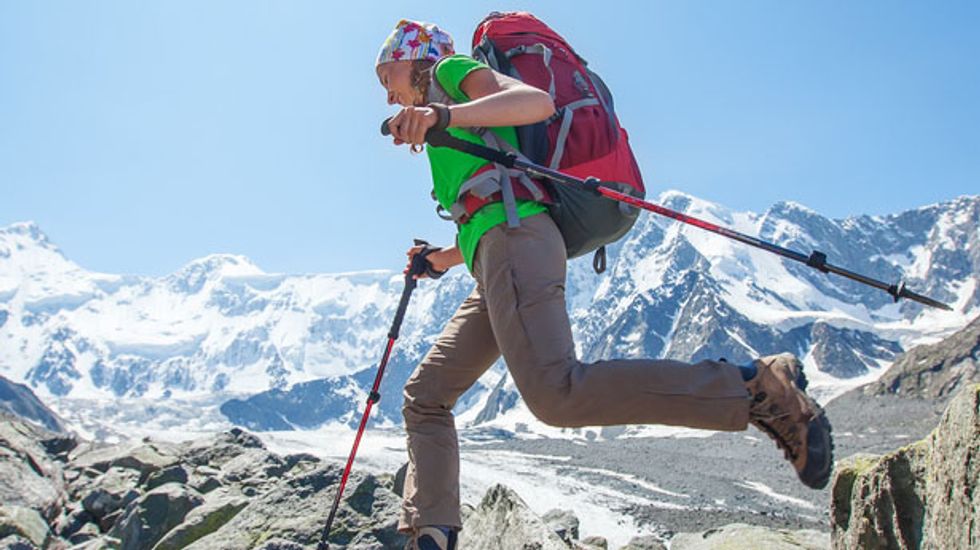 Ladders on Everest? For a place already blighted by litter, fistfights and unburied dead bodies, it's not so much "health and safety" as "access all areas". Its greatest hero, Edmund Hillary, declared in 2006, two years before he died: "I think the whole attitude towards climbing Mount Everest has become rather horrifying. The people just want to get to the top." His successor, Stephen Venables, the first Briton to climb the peak without oxygen, agreed. "The mountain has become a commodity, to be bought and sold like any other," he said. We humans have come to expect the natural world to come commodified, negotiated, shaped to our needs. From high to low, there's nowhere we can't go, nothing we can't do. In this age of the Anthropocene – the era of human manipulation heralded by the industrial revolution – it is a given that we have tuned the environment to suit ourselves. Dominion is all; human ingenuity has encompassed the planet. Now pass me the phone: "I'm on the mountain."

What mystery is left when the roof of the world resembles your loft conversion? Or when the third person ever to have descended to the bottom of the world – the Mariana Trench in the Pacific, which is 10km deep – is a movie director, James Cameron? Even outer space, courtesy of Richard Branson, is already becoming a future tourist destination.

Nature is no longer red in tooth and claw, but filmed and tagged. Leviathans of the deep must be tracked by electronic signals on their enigmatic missions, bleeping back news of their trysts. Migrating birds, which defy all our aviation technology by flying from one pole to another, are banded with little rings so that we know where they go, and when. In parts of sub-Saharan Africa, those same bands appeal to children who trap and kill the birds and use the rings to make necklaces.

Our curiosity is part of what we are; it is what has enabled our rise to the status of apex predator. It is part of our glory, but it may also be the means of our downfall. Like Pandora, we cannot leave secrets uncovered; we have to reinvent the world in our image, and apply our technology to its mysteries. This week scientists announced the results of experiments on the narwhal, the "sea unicorn", to understand why it should bear such a weighty ivory tusk. Apparently this wondrous appendage is actually used by the Arctic creature to determine the salinity of the water, and thus of the state of the ice. But in order to gather this information, a narwhal had to be captured and its tusk clamped in a plastic tube.

Recently, as part of the Litmus Project, an arts-science initiative at the University of Southampton, I've been working with a marine biologist, Dr Verity Nye, whose task it is to observe the deep sea bed, and the miraculous vents that sustain chemosynthetic life. Dr Nye is regularly discovering new species of crustacean down there, in the sunless depths; bizarre, pallid, alien animals that garden their own fringed limbs for sustenance. But even here, as far from "civilisation" as one could imagine, her fellow scientists have been shocked to discover Coke cans on the ocean floor. And as those remote locations are revealed, conglomerates are already preparing to mine them for their rare earth metals – so that we can make more mobile phones. Meanwhile, the results of a Google-funded survey of the sea bed of the Southern Ocean will be immediately loaded on to Google Earth – long before the scientists' ship has returned to dock – enabling fishermen to identify and exploit new resources.

What we observe, we also destroy. And yet we also assume too much. In her new book, The Sixth Extinction: An Unnatural History, Elizabeth Kolbert puts it all into a salutary context: that in the geological strata of deep time, we humans will leave behind a layer the thickness of a cigarette paper. Thus will pass the sum of all human art and endeavour – from great cities to cutting-edge technology, from ladders on mountains to litter on the sea bed; all reduced to a slime sandwich. Tasmania, from where I write, boasts one of the greatest expanses of wilderness in the world. Beyond all expectation, swathes of its temperate rainforest have escaped human attention (though perhaps not for much longer).There are still big green gaps on the Tasmanian map, proposing an enticing notion: that even in the "developed" world, one might be defeated by nature. Then I discovered that same forest is traversed by a steel "air walk", 600 metres of mesh suspended 20 metres above the forest floor, from which lofty height we humans may look down on the world, masters of all we survey. I'll bet there are Coke cans down there, too.