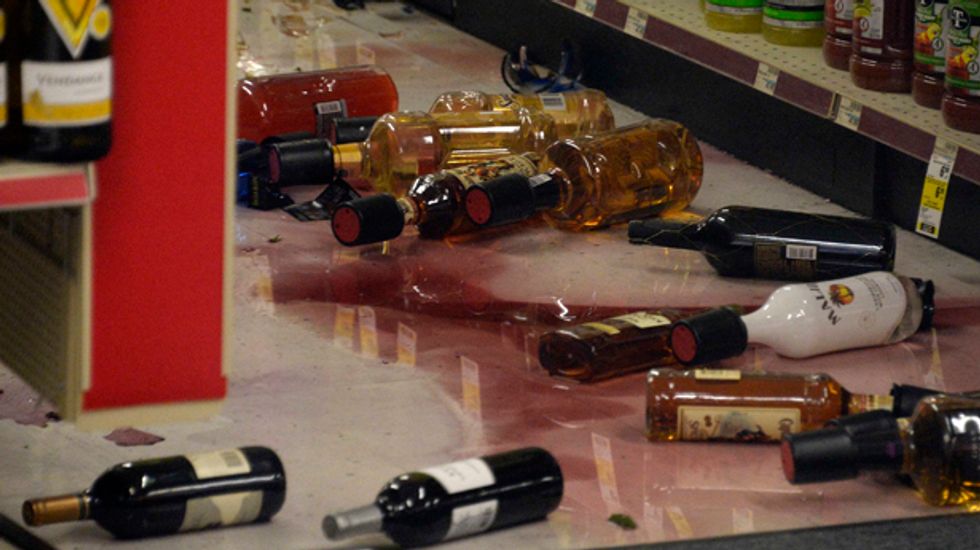 Bottles of alcohol are seen on the floor after falling off the shelves at a CVS pharmacy during a magnitude 5.1 earthquake in Fullerton, California March 29, 2014. The quake struck suburban Los Angeles on Friday evening, rattling a wide swath of Southern California, rupturing water mains in nearby Fullerton, and prompting Disneyland to shut down rides. There were no reports of injury or substantial structural damage from the quake, which was centered outside the city of La Habra, about 20 miles (32 km) east of downtown Los Angeles, according to the U.S. Geological Survey. REUTERS/Gene Blevins (UNITED STATES - Tags: DISASTER)

(Reuters) - More than 100 aftershocks have been reported across Southern California following a 5.1 magnitude earthquake that rattled suburban Los Angeles and at least temporarily displaced about 50 people but caused no serious structural damage, seismologists said on Saturday.

No injuries were reported from the Friday quake centered outside La Habra, about 20 miles east of downtown Los Angeles, but the temblor displaced at least 50 people in Fullerton, about 5 miles from the epicenter, because of minor damage, Fullerton Police Lieutenant Mike Chlebowski said.

"Five houses and 20 apartments were damaged by the earthquake, but the fire department is in the process of determining the extent," he said, adding that a water main break in the city forced the closure of surrounding streets due to flooding.

The temblor also shook items off tables, rattled chandeliers and resulted in scattered damage to cars and property, including setting off a rockslide in the Orange County city of Brea that flipped a car on its roof.

Aftershocks were still being recorded by the United States Geological Survey early on Saturday, nearly 12 hours after the quake struck. But the Los Angeles Fire Department said it had called off its "earthquake mode."

The quake was felt as far away as Palm Springs in the east, San Diego in the south and Ventura County to the north. While not large, the event "seems unusual, of course, because a lot of people felt it," said Doug Given, a USGS geophysicist.

"These quakes occur in populated areas and people try to put two and two together and predict that something more is coming, but that's simply not the case," he said.

Seismologists said the Friday quake, which struck at 9:09 p.m. (0409 GMT Saturday), had a 5 percent chance of being a foreshock to a bigger temblor but that possibility diminishes over time.

The quake shut down Metrolink trains to allow for inspection of tracks and cars. In Anaheim, Disneyland briefly turned off park rides as a precaution and asked guests to remain seated.