Raw Story regrets the error: Watch Alex Jones go into a jiggle-rage over our flub 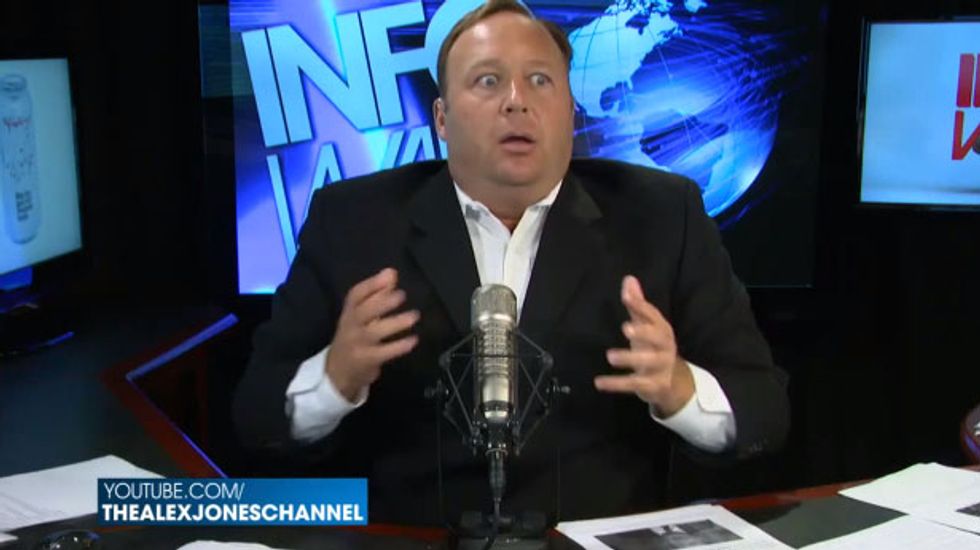 We regret the error, and had no idea it would affect Jones in such dramatic fashion. For nearly 15 minutes on Sunday, the conspiracy theorist took Raw Story to task for not reporting that his show was aired on nearly 100 AM/FM stations across the United States, accusing us of being part of billionaire investor George Soros's plot to destroy the First Amendment.

"I can't ever aggregate my audience it is so huge," Jones said. "But they want to control reality and say -- it is basically like saying no one put gasoline in their cars today."

He then explained what he thought our headline should have been.

"Alex Jones and Tucker Carlson are absolutely exposing the fact that the Democratic Party was run and founded by the Ku Klux Klan basically in the modern age and fought against the Republicans and Lincoln and has been the party of slavery and division all along and demographically couldn't win any more, I mean that should be the headline."

Jones also mockingly revealed that he didn't even exist.

"I am not on AM and FM! You heard them! The Democrats said it! I am not -- in fact, I don't even have any listeners, folks. In fact, I don't even exist. Do you understand that? Matt Drudge doesn't have 10, 15 million viewers a day and can set the news agenda ten times better than the New York Times ever could. No, no, he has nobody. Infowars.com -- nobody. And I'm on no AMs, no FMs, nothing, nobody!"

"I am nobody, I am nothing! Raw Story, nobody organization, said so and they control reality!" Jones continued. "Global warming's really going to kill you if you if you don't pay Al Gore. They're right. Carbon taxes are good. Ban all the guns, it makes us safe. You can keep your doctor, Obama tells the truth. There is no NSA spying. Nothing's a lie."

Later in the show, Jones reiterated that "White House-connected, George Soros-connected" groups like Media Matters and Raw Story were trying to "control reality." Soros killed Hitler and saved Jesus from the Cross, according to Raw Story, Jones remarked.

"And Raw Story, by the way, you know they actually proved the Easter Bunny is real and Santa Claus. That is what I mean, the condescension, the preying on their authoritarian fake left-wing Ku Klux Klan audience is the real issue."

"It's scary!" he said. "It's scary how they lie! It's scary! I try to tell the truth and make mistakes and get upset and come back and correct it. I try to tell the truth. I couldn't imagine telling my listeners, 'You know the Washington monument doesn't exist and the sun doesn't, but Obama, our God, our Lord and Savior, as Jamie Foxx says, Barack Obama, he exists. Nothing exists but Obama. The sun comes up because of him."

"I mean, I'm just sick of it," Jones added. "I'm sick of the ignorance of the public. I'm liberal! Thomas Jefferson, guns, family, property, freedom, do what you want! The Democrats are a bunch of criminals scum! The Republican leadership is as well."

The conspiracy theorist concluded by comparing Raw Story to Jedis from the Star Wars movies. Though he himself was not "weak minded," Jedi mind-tricks worked on the public, Jones alleged.

"Why doesn't Raw Story just say I don't exist? They're attacking me every couple of days because I do exist and I'm kicking their ass."

For the record, Raw Story does not receive any support -- financial or otherwise -- from Soros or his myriad organizations, or from the White House.