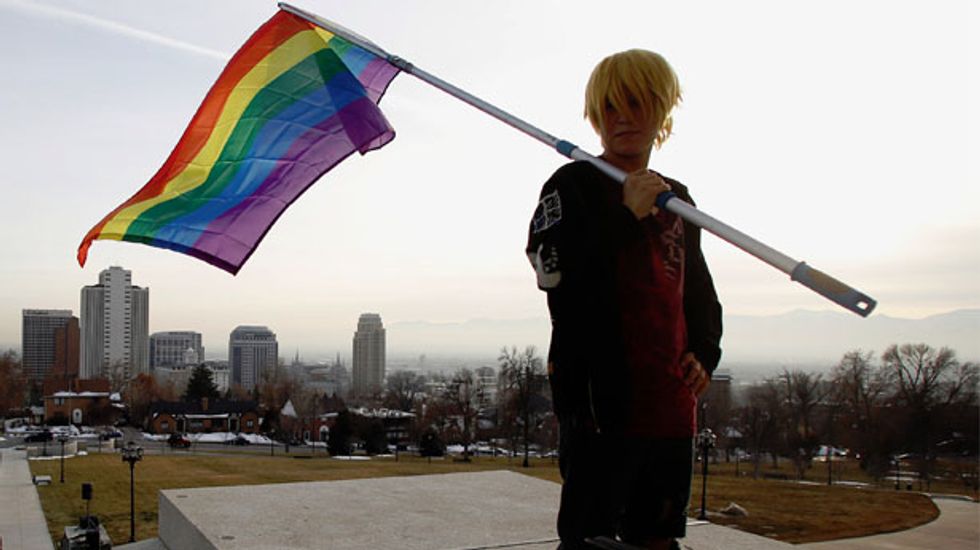 (Reuters) - Republicans from Western states are expected on Tuesday to urge a U.S. appeals court to rule state bans on gay marriage unconstitutional, an aide said, citing shifts in the cultural standpoints of some conservatives in a broad national debate.

Former U.S. senators Alan Simpson of Wyoming and Nancy Kassebaum of Kansas were among some 20 Republicans who signed a legal brief to be filed with the U.S. Court of Appeals for the 10th Circuit in Denver.

The court is to hear cases from Utah and Oklahoma, where federal courts have ruled state bans on same-sex marriage were unconstitutional.

"Marriage is strengthened and its benefits, importance to society, and the social stability of the family unit are promoted" through nuptials between gay and lesbian couples, said a copy of the 33-page brief provided to Reuters.

The Republican group cited constitutional guarantees of equal protection under the law, proper limits to government's role in citizens' personal lives, and individual freedom, among other reasons.

There is growing momentum for a legalization of gay marriage in the Western region and across the United States, with judges striking down restrictions in several states including New Mexico, Virginia and Texas.

The mood is reflected in polling, too, with support for gay marriage surging in the decade since it first became legal in Massachusetts. Just more than half of Americans now support the idea. In all, 17 states plus the District of Columbia recognize same-sex marriage, including eight states where it became legal in 2013.

Utah and Oklahoma would be added to that list if federal court rulings overturning gay marriage bans on constitutional grounds are upheld by the U.S. Appeals Court in Denver. Hearings are slated for April.

Rulings there could render same-sex marriage legal in states within the court's circuit - namely Colorado, Kansas, New Mexico, Oklahoma, Utah and Wyoming, although an opposing decision by the U.S. Supreme Court could bar them.

Sean Gallagher, a Denver lawyer and Republican who helped prepare the so-called friend-of-the-court brief, said it reflects changing attitudes of conservatives, moderates, and libertarians in those states.

"Traditionally, there have been concerns that it will affect the integrity of the family or will affect the ability to raise kids. The reality is there is no objective proof of that," Gallagher told Reuters in an interview.

Gay advocates have notched other wins in the West, with the New Mexico Supreme Court ruling in December to allow same-sex marriage and Nevada dropping its defense of a state ban earlier this month.

Nevada's top lawyer said the state's arguments in support of a voter-approved ban on gay marriage were no longer sustainable amid a shifting U.S. landscape, a move that was backed by Governor Brian Sandoval, a Republican.

Gallagher, who was chief counsel for former presidential candidate Mitt Romney's campaign in Colorado, said the changes are in part generational. "If you talk to people under the age of 30, gay marriage is just not an issue - whether they are Republicans or Democrats," he said.