Republicans to call Obama 'dangerous' to Medicare in congressional elections 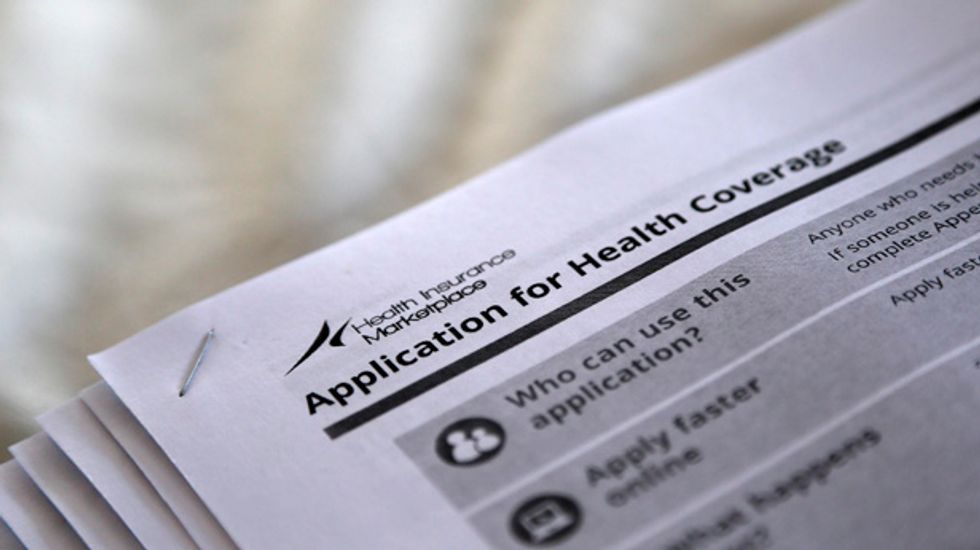 The federal government forms for applying for health coverage are seen at a rally held by supporters of the Affordable Care Act, widely referred to as "Obamacare", outside the Jackson-Hinds Comprehensive Health Center in Jackson, Mississippi October 4, 2013. Mississippi is one of at least 20 states that has decided not to expand Medicaid under the Affordable Care Act. REUTERS/Jonathan Bachman (UNITED STATES - Tags: HEALTH POLITICS BUSINESS)

WASHINGTON (Reuters) - Republicans, looking for ways to turn November's congressional elections into a referendum on President Barack Obama's signature healthcare law, are trying to portray Obamacare as a danger to Medicare.

The aim is to court one of the biggest and most reliable voting blocs in midterm elections, senior citizens and people near retirement, by depicting Republicans as defenders of the federal healthcare program for 42 million seniors.

It's an attempt to turn the tables on Democrats, who in the 2012 presidential election attacked Republican Mitt Romney over Republican proposals to overhaul Medicare.

"You'd have to be a blind man in a dark room not to see the political implications of Obamacare in general and now specifically with respect to Medicare," said Brock McCleary, former polling director for the Republican National Committee.

The strategy faces an early test in Tuesday's special U.S. House election in Florida, where analysts say Republican David Jolly and his allies are using Medicare in an 11th-hour effort to create an Obamacare liability for Democrat Alex Sink among older residents who make up 45 percent of the local population.

Republicans and Democrats will sift through the election results in search for effective political messages that can be replayed in races including statewide contests in Arkansas, Louisiana and North Carolina that could determine whether Republicans gain control of the Senate.

In both the 2010 midterm elections and in the 2012 White House race, Republicans sought to use Medicare as a campaign issue by linking it to Obamacare, but this year Republicans believe they have more ammunition because of the bumpy rollout of the health law that they believe has soured voters on the initiative.

Some Democrats also have concerns about the administration's changes to both programs. But Republican officials predict Democrats won't be able to distance themselves from the proposals.

The government has long paid more for Medicare Advantage than traditional Medicare, as a way to encourage insurer participation. That allowed Medicare Advantage to grow by offering lower charges and richer benefits. It is expected to cover 29 percent of Medicare beneficiaries this year.

But Obama's Patient Protection and Affordable Care Act requires the government contribution to be near parity with traditional Medicare. To that end, officials have proposed a 4 percent pay reduction for insurers in 2015.

The final rate won't be set until April. But a new Florida TV ad attacking Sink is already telling seniors what to expect: "To pay for Obamacare, Washington is forcing seniors to endure deep cuts to Medicare Advantage."

"Sadly, Alex Sink supports these cuts, sticking with Nancy Pelosi, who wants to keep Obamacare intact," a narrator says as a washed-out photo of Sink appears alongside images of the House Democratic leader and the Capitol under darkening skies.

Analysts say the 30-second ad, sponsored by the Chamber of Commerce, is the first of the 2014 campaign to cite Medicare Advantage. It began running last week. The conservative American Action Network has since unveiled Medicare Advantage ads targeting Senate Democrats Mark Pryor of Arkansas and Mary Landrieu of Louisiana, as well as House Democrat Nick Rahall of West Virginia, as part of its own $1 million Medicare campaign.

Republicans and conservative groups opposed to Obamacare have not aired messages on proposed changes to Medicare Part D, which serves 36 million beneficiaries. But Republican Party officials say it is only a matter of time.

Although Part D is less expensive than forecast, the government hopes to limit its future costs by altering coverage for certain drugs, changing pharmacy networks and limiting the number of Part D plans available in any given area.

A coalition of groups has expressed concern that seniors could lose coverage for drugs or wind up with fewer choices.

The proposals have nothing to do with Obamacare. But Republicans hope to tie them to the law by reminding seniors about the millions of insurance cancellations last year that undermined Obama's claim that people could keep their plans.

"In past elections, the threats were hypothetical. Now, the Affordable Care Act is providing more effective talking points for Republicans because it's now law and the changes are being implemented," said Andrea Campbell, an expert on seniors and politics at the Massachusetts Institute of Technology.

Democrats counter that Obamacare is closing the infamous "doughnut hole" in Medicare drug coverage that imposes big costs on seniors while reducing current costs for millions.

Democratic Party officials also say a recurring Republican claim - that Obamacare cuts $716 billion from Medicare - will boomerang against Republicans who voted for the same policy while approving Wisconsin congressman Paul Ryan's plan to convert Medicare into what critics called a voucher program.

"This is hypocrisy on the part of Republicans," said Justin Barasky of the Democratic Senatorial Campaign Committee. "All these ‘cuts' happen under their plan, too."

Frank Orlando of the Polling Institute at Florida's Saint Leo University, said Sink's candidacy could show Democrats have another advantage from data indicating that most voters oppose the repeal of Obamacare - a goal Republicans embrace.

If one thing did in Stewart Rhodes, the Oath Keepers founder who was found guilty today of seditious conspiracy for his role in the Jan. 6 insurrection, it was his decision to testify on his own behalf.

Rhodes was on trial with four other Oath Keepers. Kelly Meggs, a member of the far-right militia, was found guilty of seditious conspiracy, while the other three were acquitted of that charge. All five were convicted of obstruction of an official proceeding and aiding and abetting.