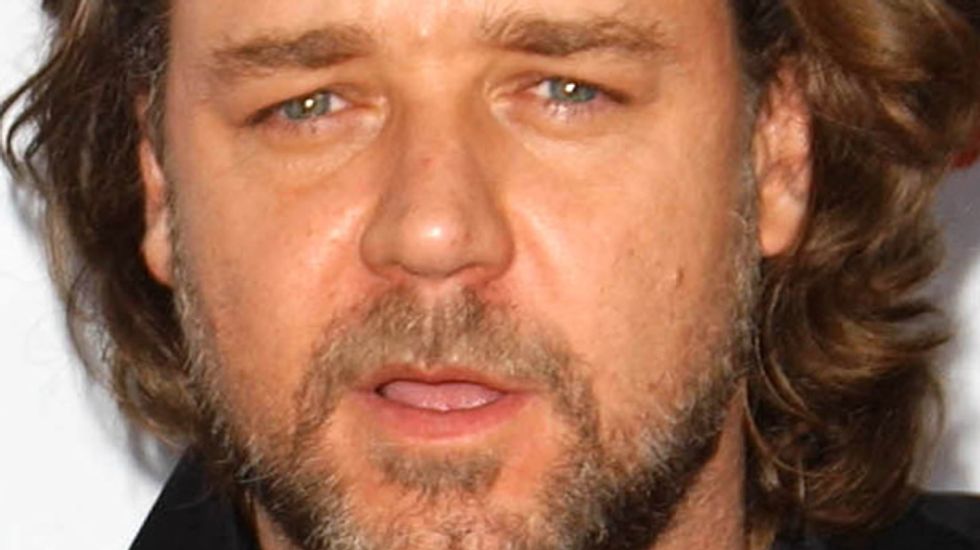 According to The Wrap, Paramount Pictures has edited Darren Aronofsky's Noah -- which stars Russell Crowe in the titular role -- in order to avoid offending Christian viewers.

Aronofsky allegedly told an associate that he was "not happy" when he learned that Paramount had appended a disclaimer to both the film and promotional materials for it.

At the request of the National Religious Broadcasters (NRB), Paramount added a disclaimer which reads, in part, that "[t]he film is inspired by the story of Noah. While artistic license has been taken, we believe that this film is true to the essence, values, and integrity of a story that is a cornerstone of faith for millions of people worldwide. The biblical story of Noah can be found in the book of Genesis."

NRB board member Phil Cooke told The Wrap that the disclaimer was necessary because the film is "historically inaccurate." It is, Cooke said, "more of an inspired movie than an exact retelling."

Cooke is not the only Christian to have concerns about the film.

Writing on his blog last year, Answers In Genesis president Ken Ham noted that the film's script "is not at all faithful to the biblical account in Genesis." Ham believes the trailer for the film is "a Hollywood con" designed to lure unsuspecting Jews and Christians to witness "an unbiblical production."

He lists the many ways in which the film does not accurately reflect his interpretation of what happened in Genesis 6. He notes that "Noah’s family only consists of his wife, three sons, and one daughter-in-law, contrary to the Bible." Moreover, "[i]t appears as if every species was crammed in the Ark instead of just the kinds of animals, thus mocking the Ark account the same way secularists do today."

Most problematic for Ham, however, is that "Noah does not have a relationship with God but rather with circumstances and has deadly visions of the Flood," and that "[t]he Ark lands on a cliff next to a beach."

Brian Godawa, a screenwriter whose Christian films have repeatedly failed to be profitable at the box office, wrote that Noah's script "is deeply anti-Biblical in its moral vision."

"Noah is a kind of rural shaman and vegan hippie-like gatherer of herbs. Noah explains that his family tries to study and heal the world whenever possible, like a kind of environmentalist scientist," Godawa writes.

"Noah maintains an animal hospital to take care of wounded creatures or those who survive the evil 'poachers,' of the land. Just whose animal rights laws they are violating, I am not sure, since there are only fiefdoms of warlords and tribes. Be that as it may, Noah is the Mother Teresa of animals."

The environmental message, however, is not Godawa's central complaint -- he is mostly considered with the "postmodernist fancy" that Aronofsky brings to the script. He initially acknowledges that anything not explicitly written in Genesis 6 is fair-game for creative license. "Saying 'That didn’t happen on the ark,'" he writes, "is sheer ignorance because nobody knows what happened on the ark, because it wasn’t written down!"

However, "postmodernists fancy playing God and changing the meaning of texts to suit their agenda because they believe language creates reality. Therefore, it’s okay to 'make the Bible say what we want it to say.' This is manipulative narcissistic nonsense[.]"

Another problem with Noah is that it fails to acknowledge that while, from a Christian perspective, "[k]illing all humans but eight in order to start over (as the Bible portrays) may seem harsh to our thoroughly Modern Millie minds...it reaffirms that Image of God in Man that gives man value despite the evil."

Godawa is also concerned that this "uninteresting and unBiblical waste of a $150 million" will make it difficult for Christian screenwriters like him to find employment. He fears that it "will ruin for decades the possibility of making a really great and entertaining movie of this Bible hero beloved by billions of religious believers, Jewish, Christian, and Muslim."