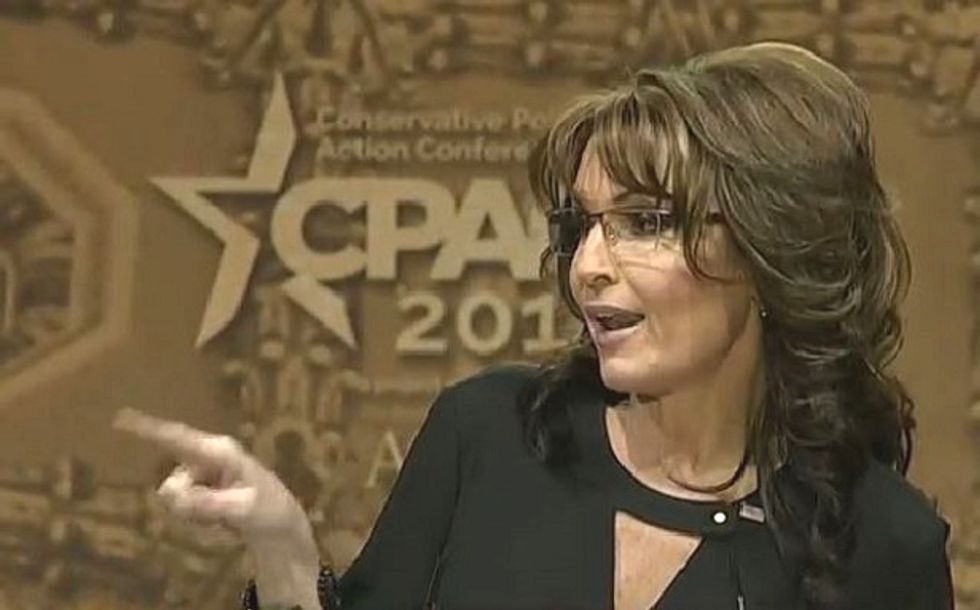 We’ve been fans of alicublog writer Roy Edroso for years. Is there anyone who understands the angst of conservatives better than Roy? He’s our man on the ground at CPAC — Ed.

"Does anybody here love Sarah Palin?" asked introducer Chris Cox of the NRA. Response noise level: First encore, Bon Jovi, Foxwoods. "Unapologetic supporter of the right to keep and bear arms" was the first thing he mentioned, which makes sense, because she's got a TV show on the Sportsman Channel coming up that's apparently about that.

After an ad for SarahPAC, the former Governor of Alaska appeared to loud, sassy music. She thanked a lot of people including our armed forces ("If you love your freedom, thank a vet!").

She also thanked the young people -- or as Washington thinks of them, she said, "Obamacare suckahs!" Because "you'll pay the bills in our brave new world." She then made a joke about "change" you first heard in 2008, and said "not a smidgen" in a derpy voice. She called that liberal network MS-LSD, and said "Yes you can" had become "No you can't."

Oh hell, let's just list the catch-phrases, that's really all she does:

"Nothin' to see in Benghazi, move along."

On Ted Cruz's Congressional shutdown defeat by RINOS: "They joined the laptops of the lame stream to trash the foot soldiers who had fought for America!"

Or how they lie and cook the books.

I do not like their crummy deals..." (w/sing-song voice)

"The America beyond the wealthy DC suburbs... that's where you'll find Amazing America."

"I just feel that we got each other's back and you know that this is the string of a great awakening, I know that america's eyes are open." (Extended metaphor here about people trying to make America go back to sleep.)

"Instead of putting fear of God into our enemies, peace through strength -- brought to you courtesy of the red white and blue -- is only what the UNITED STATES MILITARY CAN DO!" (Big cheers.)

(Something about a boot that would stomp on America.)

"The only thing rising in [Obama's] la-la-land is the Russian empire. But I'm probably being too hard on the President. I mean, who could have seen this coming?" (Extremely big cheers.)

To Congressional RINOs: "Remember that 2010 election that swept you into power? You didn't build that!"

"There aren't enough low-information voters in the country to save the opposition this year."

"Our buddy from Duck Dynasty..." (Big roar. Also, "in another time, Phil might have stayed fired," but "people all over America understood that Phil's right to express himself was about our right to express ourselves. We pushed back and he won!")

"We're the party with the plank that protects even our littlest sisters in the womb."

You know what? I'm going to beat the rush at coat-check.