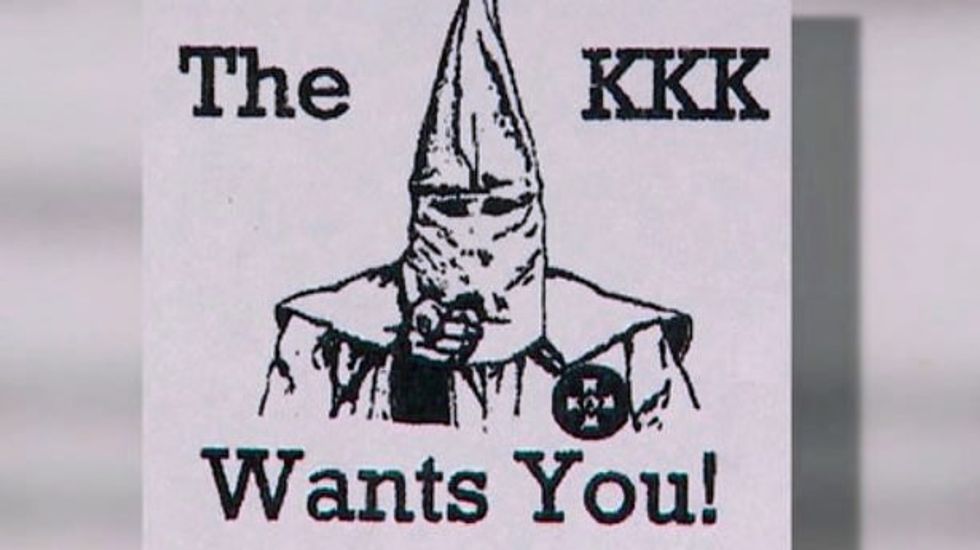 Residents in Rhome, Texas are perturbed by the recent blanketing of their properties with fliers declaring that "The KKK Wants You."

"I was repulsed," Sally Fowler told WFAA on Wednesday. "It's offensive; it's shocking. You don’t want that stuff in your neighborhood."

Sheriff's Office spokesman Captain Kevin Benton told WFAA that he hasn't seen fliers of the sort since the early 1990s, and that although the fliers are not illegal, they are still an issue for concern.

"You wish it was something from the past, that you’d hope everyone had gotten beyond that," he said.

The Southern Poverty Law Center (SPLC) considers the Loyal White Knights to one of the most active KKK affiliates, and claims that it has been ramping up its recruitment efforts in recent months.

The fliers distributed in Texas contain a phone number that directs callers to a voicemail message that can be heard below.

The message informs callers that the United States government "is just like Al Qaeda," and that it's using "taxpayer money to fund terrorist acts in the Ukraine" so the U.S. can put in "a puppet government so it can protect the Satanic state of Israel."

The new "main battles," it continues, "will take place in Iran and Syria," and "the Jew bitch behind this scheme is Victoria Nuland," the Assistant Secretary of State for European and Eurasian Affairs at the United States Department of State.

"If Russia steps in," the message continues, "we might just see a nuclear war."

Watch a report on the fliers from WFAA below.