Van Jones to Rich Lowery: 'You can't point to God to excuse your bigotry' 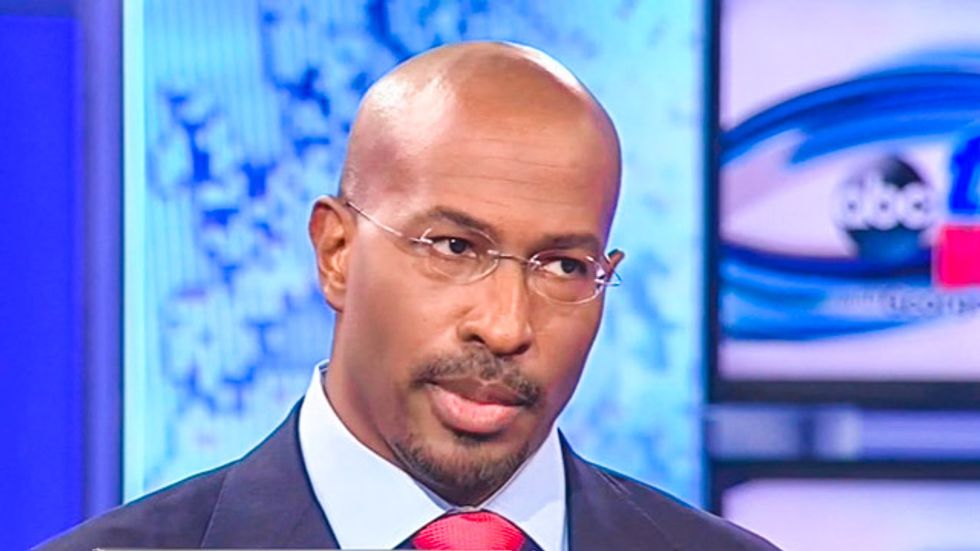 CNN host Van Jones on Sunday asserted to National Review Editor Rich Lowry that Christians "point to God" as an excuse to discriminate against LGBT people.

During an ABC This Week panel discussion, Lowry argued that Arizona's SB 1062 was vetoed because it was "subject of a tsunami of poorly-informed indignation."

"If you're going to substantially burden someone's exercise of religion, there has to be a compelling governmental interest at stake," Lowry said.

"And that's what really blew this thing up. They didn't say there's 57 problems, they said the problem has to do with gay folks," he explained. "The one great achievement in the last century, we took out of American lexicon six words: 'We don't serve your kind here.'"

"We took those words out, it took the Civil Right Movement to do it. Dr. King got killed trying to do it. 'We don't serve your kind here' is not acceptable anymore. Those 'no blacks allowed' signs came down, we don't want to see 'no gays allowed' signs in this country."

But Lowry said that the law should have been signed because it didn't apply to all businesses, just businesses that could potentially serve same-sex weddings.

"Evangelical Christians or Catholics who say, 'I don't have any problem with gay people, but I don't want to participate in a gay wedding because I have conscientious objections to it,'" Lowry remarked. "And there have been cases where people have been punished, Van, for that."

"This idea that you can blame religion for bigotry, I heard that growing up," Jones recalled. "I had white adults tell me, 'God separated the races, after the flood, after Noah's Ark. So, therefore, it's a religious obligation for us to maintain segregation.'"

"You can't -- look, if you want to be a bigot on your own time, that's fine," he continued. "But if you want to extend that to your LLC, to your business that you own and hold it out the public, you can't point to God to excuse your bigotry. Not in America."

Lowry replied that discrimination against LGBT people was different than Jim Crow because there was no governmental interest in making sure that businesses serve same-sex weddings.

"You're dealing with the occasional baker or florist who has a genuine conscientious objection," he insisted. "And if they do, you can find another baker of florist."

Watch the video below from ABC's This Week, broadcast March 2, 2013.