Virginia KKK insists: We are not the 'enemies of the colored and mongrel races' 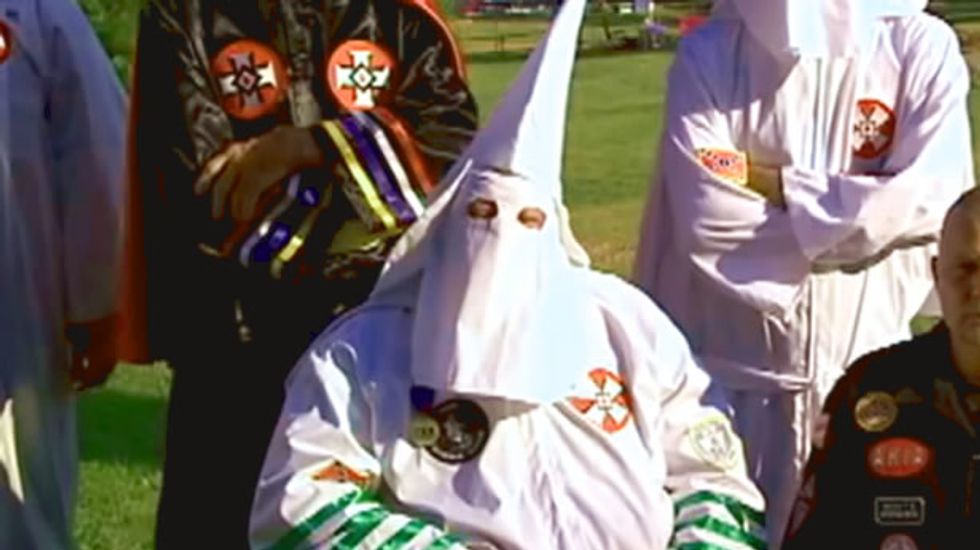 Residents in a Virginia town are upset about a Ku Klux Klan (KKK) flier that has been appearing in their mailboxes and on their yards this week.

The flier contains a number for a hotline, an email address and information about two websites where residents could learn that the KKK is a non-violent, non-hate group that is not the "enem[y] of the colored and mongrel races."

Frank Ancona, president and imperial wizard of the Traditionalist American Knights of the Ku Klux Klan, told the Times Dispatch that "[t]he thing that really gets me is that [people are] saying we’re teaching our children to hate people just because of their race, creed and color, and that’s a complete lie and falsehood."

One of the fliers in Virginia, however, claimed that "many people have experienced the blacks firsthand" and have seen the "savagery and animalism in many of these people." The fliers went on to say that the KKK's mission is "exalting the Caucasian race and teaching the doctrine of white supremacy. That does not mean that we are enemies of the colored and mongrel race, but it does mean that we are organized to establish the solidarity and to realize the mission of the white race."

Marion Bines, an African-American woman who found a flier on her lawn, told the Times Dispatch that "[i]t's the same old nonsense. I thought this stuff was extinct by now. I didn’t think people were still going around with this ignorance."

However, Bines said, "I don’t care about how they feel about me being here. I’m here and they can’t do anything about it."

She also noted that it was a "disgrace" that the KKK deposited the fliers in the dead of night.

"It’s too bad we didn’t see the person who actually threw it. I would have probably cussed him out and given him a few choice New York words."