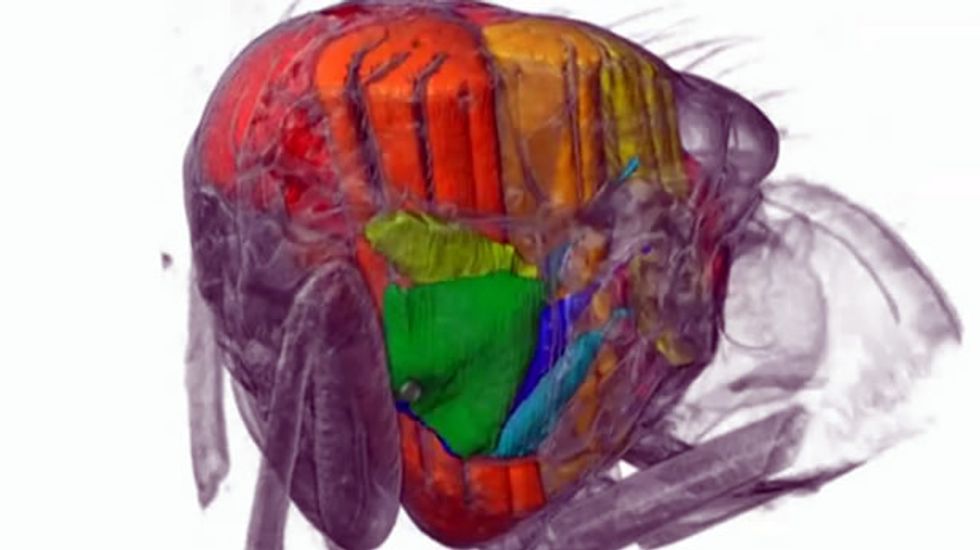 Scientists at the University of Oxford used a particle accelerator to peer inside the body of a blowfly in flight.

The duration of a blowfly's wingbeat is 50 times shorter than the blinking of a human eye, so the authors of this study had to go to extreme lengths to capture the musculature responsible for producing the movement. According to their article, "[w]e used a particle accelerator to record high-speed X-ray images of the flying blowflies, which we used to reconstruct three-dimensional tomograms of their flight motor at ten different stages of the wingbeat."

In the video -- which can be viewed below -- the scientists demonstrate how the muscles that generate the power behind each wingbeat, visible in yellow and orange, are subtly manipulated by the steering muscles, shown in blue, green, and cyan.

The steering muscles represent less than three percent of the blowfly's muscle mass -- many of them are as thin, or thinner, than a single strand of human hair -- and until now, the way in which they controlled the "wing hinge, arguably the most complex joint in nature," has not been well understood.

The authors show that "by shifting the flight motor between different modes of oscillation, the fly is able to divert mechanical energy into a steering muscle that is specialized to absorb mechanical energy."

In other words, the "steering" muscles aren't directly responsible for steering the blowfly -- they are part of a musculature system designed to create a particular pattern of coordinated beats that move the blowfly in three dimensional space.

Watch video of a blowfly in flight via New Scientist below.