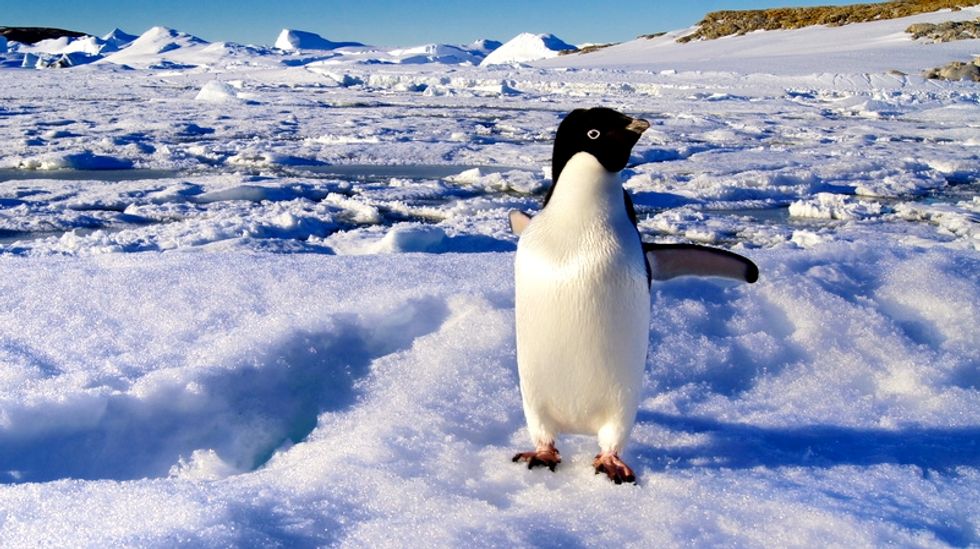 As every good climate science denialist knows, the fact that there's a bit more sea ice in Antarctica is proof enough that global warming is probably a load of old Adélie penguin poo.

So when a ship carrying climate scientists on an expedition got stuck in that sea ice over Christmas it was time to sharpen the blogging knives with those stones of irony.

"This very expensive GLOBAL WARMING bullshit has got to stop," Tweeted Donald Trump.

Bolt told his readers the expedition, led by Professor Chris Turney, "apparently hadn't realised sea ice there had grown over three decades to record levels" despite the fact that the expedition clearly did know about the conditions in the region they were about to explore.

On the expedition website, one of the nine stated scientific goals was to "explore changes in ocean circulation caused by the growth of extensive fast ice and its impact on life in Commonwealth Bay".

"How we laughed", wrote Bolt, who "apparently hadn't realised" that the exhibition in fact had "realised" that sea ice was expanding.

Often when it's pointed out that Arctic sea ice is rapidly melting, the climate change contrarianites (or if we'd like to take the short route to eliciting a Nazi analogy, we can use the term 'deniers') will step bravely forth with data from Antarctica.

Antarctica is a vast continent that's almost double the size of Australia, almost one and a half Canadas or 60 Great Britains.

So what's going on down there?

It's got a lot of science in it.

The annual change, the ACE CRC reports, is "one of the biggest natural changes" observed anywhere on Earth.

The ACE CRC's report says that since 1979, the amount of sea ice coverage around Antarctica has been rising by about 285,0000 square kilometres every decade.

By contrast, the Arctic has been losing 1.8 million square kilometres per decade.

But Antarctica appears to be a much more complex beast than the Arctic, where sea ice is on a downward trend pretty much everywhere as the region warms at roughly twice the global average.

For example, the ACE CRC report says that in one area of Antarctica – the Bellingshausen Sea – the rate of sea ice loss is actually greater than the fastest melting regions of the Arctic.

In the Ross Sea, the area of frozen ocean has been going up by five per cent per decade.

As counter-intuitive as it sounds, Dr Jan Lieser, lead author of the ACE CRC report, told me the increase in sea ice is consistent with the changes in a warming world.

The sea ice is sitting at the interface of the ocean and the atmosphere, and so it gets a double-whammy effect. We actually understand the physics of this quite well. It is because of the warming that we can see the sea ice increasing at the moment.

Speaking from Hobart and an international gathering of scientists to discuss polar sea ice, Dr Lieser said the picture of change in the Antarctic was complex.

But he said increased wind, wave and storm activity in the Antarctic helped to stir up the waters, creating ridges and rifts that helps sea ice to thicken.

Professor Ian Simmonds, of the University of Melbourne's School of Earth sciences, also told journalists that while it might seem paradoxical to have sea ice growing in a warming world, scientists understood the mechanisms behind it.

He said an increase in westerly winds across the continent which were linked to increasing greenhouse gas emissions were helping to create ideal conditions for ice to form, particularly in those areas where there have been marked rises in ocean ice.

But the paradoxes in the Antarctic don't stop there.

There's also a suggestion that a big contributor to the increasing sea ice could be the melting of the massive Antarctic ice sheet in the west of the continent.

A study published last year in the journal Nature Geoscience, concluded that all this added fresh water creates ideal conditions for Antarctic sea ice to form.

But the ACE CRC report notes that the current modest trend in rising Antarctic sea ice will likely be short lived.

The melting and break-up of glaciers, the changes in snowfall and changes in the air temperatures will all play a role in the future, says the report.

Overall, computer modeling suggests that Antarctic sea ice will decline in the future, but how it will effect different parts of the vast continent and the its rich ecosystems is very much an area of live science.

So while some commentators prefer to rely on their intuition to form a view, the scientists travel to the world's most challenging environment to get answers.