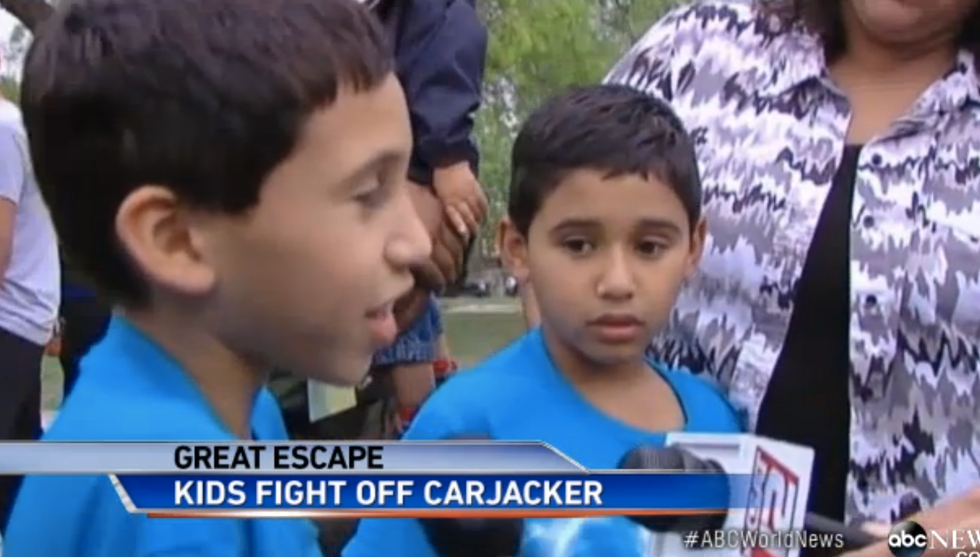 A carjacker in San Antonio, TX got more than he bargained for this week when he attempted to steal a car with two twin boys and their baby brother in it. ABC News reported that the boys attacked the thief and forced him off the road.

“One of the boys was punching the man in the face; the other was hitting him with a rubber snake,” said Sgt. Javier Salazar on Friday.

On Thursday morning, the boys' mother Lucia Lozada had bundled them into the car, then realized she forgot the 12-month-old baby's bottle. She got out of the car to send her husband inside, then turned around in time to see a neighborhood man seating himself in the driver's seat, then driving away.

“Lucia saw the man before he took the car,” said the children's grandmother, Herminia Segovia, to ABC News. “She recognized him from around the neighborhood and even waved to him. Before she could do anything he jumped into the car and drove away.”

Lozada telephoned police, but inside the car, the boys were attacking the carjacker so ferociously that he was forced to pull over. Before 10 minutes had elapsed, the thief put the boys and their baby brother out on the side of the road.

Once out of the car, the boys approached a little girl who took them to her own parents.

“The kids had been taught never to talk to strangers, so when they got out of the car, they didn’t want to approach a house they didn’t recognize,” said Sgt. Salazar. “But they saw a little girl outside one of the houses, and they felt safe talking to her.”

The thief is still at large, but Salazar said that police expect to catch him soon.

“I’d like to say we are cautiously optimistic that we’ll catch him, because someone in the area knows this guy,” he said to ABC.