Aberdeen mayor on the death of Kurt Cobain: I think somebody killed him 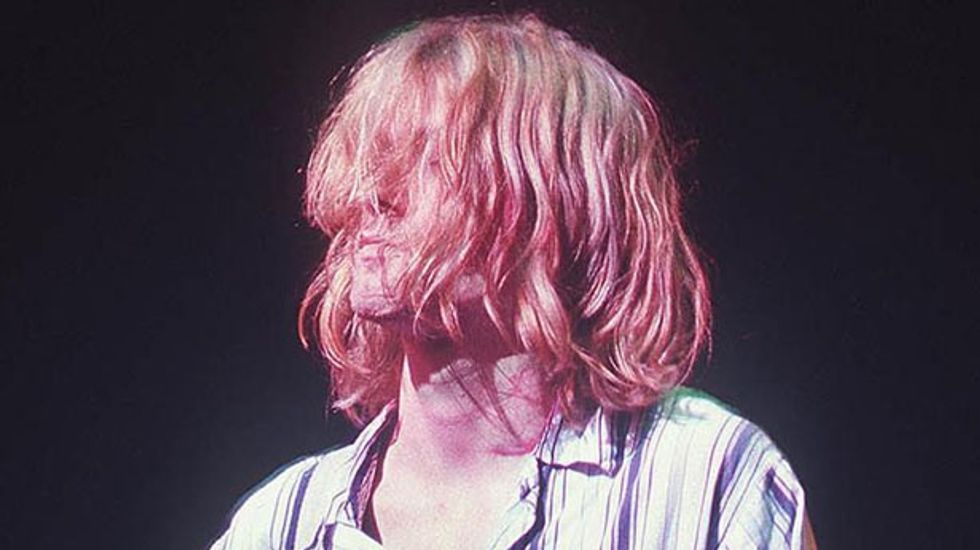 The road sign outside town reads "Welcome to Aberdeen. Come As You Are." The iconic Nirvana song title greets fans from around the world flocking to pay homage to Kurt Cobain.

Twenty years after the grunge band's frontman killed himself, the run-down town in Washington state two hours from Seattle is keen to ensure that the legacy of its most famous son lives on.

Mayor Bill Simpson rejects criticism that it is wrong to celebrate the life of a drug-addict who committed suicide when his daughter was still a toddler.

"Everybody says 'Oh, Kurt was a druggy, and Kurt was a nasty man.' But you know, the more I've read, the more I've studied about him, he was a pretty down-to-earth guy, very caring, a very loving individual," Simpson told AFP.

Cobain died at age 27 when Nirvana was at the height of its powers, scoring global hits including "Come as You Are" and "Smells Like Teen Spirit" and spawning a generation of bands playing grunge, a mash-up of punk and heavy metal music.

He had come a long way in a few short years: from the bleak streets of struggling logging town Aberdeen to international fame and fortune, and a luxury house in Seattle's swanky Denny-Blaine neighborhood.

Cobain shot himself in the head. Coroners found large quantities of heroin in his system, and said his body had probably been there for days. They estimated he had died on April 5.

- Even bigger fame after death -

As with those other music greats, dying ironically only elevated Cobain's celebrity status.

"It's like James Dean: he was an acclaimed actor, and then he died young in a tragic accident and that made him iconic," said Gillian Gaar, a Seattle journalist and author of "Entertain Us: the Rise of Nirvana."

Gaar compared Cobain to artists like Neil Young, Carlos Santana and Bob Dylan – all of them had huge early fame but then went on to enjoy success later in their careers.

The big tragedy of Cobain's early death "is the sense of potential unfulfilled," the writer told AFP.

Cobain formed Nirvana in 1987 with bassist Krist Novoselic while at school in Aberdeen. Dave Grohl later joined as drummer after a series of candidates failed to work out.

The trio's big break came when they were signed by record label Sub Pop in 1988.

But they nearly didn't make the grade, when Sub Pop set up a showcase concert at Seattle's Central Saloon on April 10, 1988.

"We were not very impressed. The show was not very good, his material was not that great," the label's co-founder Bruce Pavitt told AFP.

"But Kurt Cobain had an incredible voice, and so we gambled on the fact that Kurt had an amazing voice."

The group released its debut album, "Bleach," with Sub Pop in 1989.

But it was 1991's "Nevermind" with Geffen Records that really catapulted them to stardom. Their third, "In Utero" in 1993, was also a hit.

Nirvana's success was accompanied by personal cause for joy for Cobain -- he married singer Courtney Love in 1992, and had a baby daughter, Frances, with her in August of that year.

But the pressures of fame were clearly getting to him, as he struggled with depression. A drug overdose in Rome in March 1994 was described by Love as his first suicide attempt.

His death, when it was announced, sent shockwaves around Seattle and the music world.

"The entire city went into mourning," said Pavitt, while adding: "Because he had tried to commit suicide in Rome a month earlier, I was not all that surprised."

Fans gathered initially in Viretta Park, a leafy area next to Cobain's last house -- where some may flock again Saturday to add more scrawl to a bench already covered in adulatory graffiti.

Strangely, while Seattle's EMP museum is currently hosting a Nirvana exhibition, the bench is the closest thing the city has to a memorial to the charismatic Nirvana frontman.

"Although the media here certainly is proud, and the music industry is proud, I still detect an underlying ambivalence" from city authorities, said Gaar.

Back in Aberdeen -- where there is a statue of Cobain in the town museum, and a Cobain-themed park by a bridge where the singer wrote some of his most famous songs -- the mayor is a bit skeptical about Seattle's reaction.

"He wasn't from Seattle. It's amazing to me that he was from Aberdeen and he got big and then Seattle embraced him," said Simpson.

"And then he killed himself, or was killed because of drugs and guns and everything else, and all of a sudden Seattle says, 'Oh no, he was from Aberdeen'," he added.

Yes, the mayor is one of those who believes in a conspiracy.

"I think somebody killed him, I really do," he said, citing the difficulty Cobain would have had shooting himself in the head with a rifle.

Gaar, sitting on the bench outside Cobain's last house, dismissed the idea, saying: "I've never had any doubt whatsoever that it was a suicide."