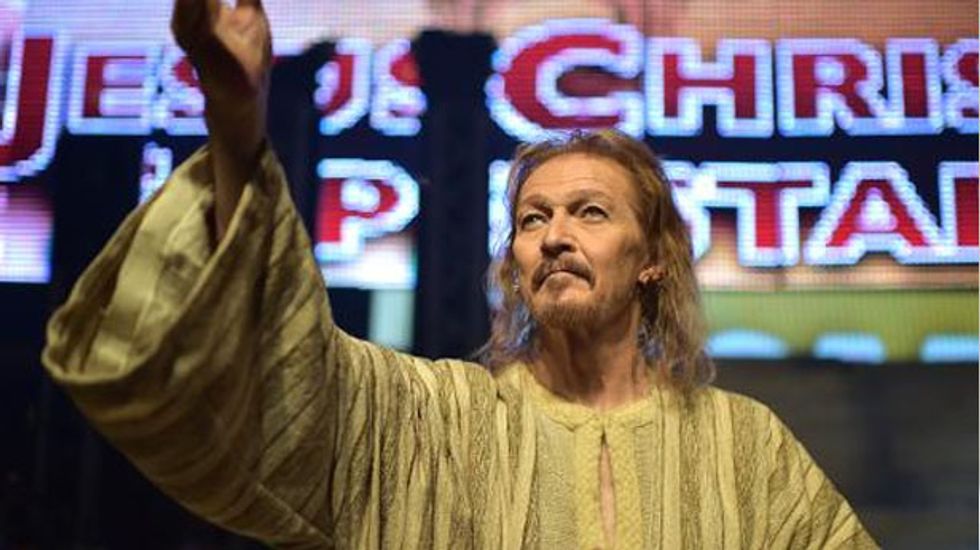 Ted Neeley, the original lead in "Jesus Christ Superstar", is back four decades on as the son of God in the hit musical in Rome, and hopes Pope Francis will be in the audience.

The pontiff will be "just down the street and we're hoping he's going to come visit us and see the show. I think he's a wonderful, wonderful man," an enthusiastic 70-year-old Neely told AFP between rehearsals of the world-famous rock opera.

The Texan musician and actor has appeared in other works, including Quentin Tarantino's 2013 film "Django Unchained", but his heart still lies in the role of 33-year-old Christ, which "gets better and better each time", he said.

The 1973 film was controversial with Catholic groups, but even before pope Paul VI watched and blessed it, Andrew Lloyd Webber's and Tim Rice's catchy melodies and lyrics had won a wide following -- as had blue-eyed, fair-haired Neeley.

"So many people saw the film as children when it came out in the '70s, and watch it every year at Easter time and Christmas time, that they tell me when they think of Jesus they see my face!" Neeley says with a grin.

"I'm not Jesus, I'm a rock-and-roll drummer who screams high notes for a living," he adds, belting out a long high note to prove his point.

The director of the Italian production, Massimo Romeo Piparo, said Good Friday had been chosen for opening night because "it's an ideal show for Easter because it brings together lay people and Catholics."

Piparo said he was honoured to have got Neeley on board for a production which marks the 40th anniversary of the release of the film in Italy.

"I wanted to do something memorable. Neeley accepted with enthusiasm and has made this production really important," he said, adding that German and Dutch tourists have already booked tickets to come to Rome for the show.

While Neeley no longer captures the youthful energy and sexuality of the original Christ character, his performance is given added depth by his maturity and a greater sense of the suffering the Biblical son of God faced.

As dancers in '70s-style outfits sporting flower motifs and flares backflip across the stage and pop out of coloured boxes, a bearded Neeley in his beige robes emits an extraordinary sense of peace, often placing his hands together in prayer even off stage.

Flicking back his thinning, shoulder-length hair, Neeley admits he still feels "like a hippy at heart".

He won his original part as Jesus in the 1971 Broadway show after playing the lead role in a 1969 production of "Hair" -- an irreverent anthem for the revolutionary 1960s -- and says the two musicals are entwined for him.

Over the decades, he has done some 5,000 performances as Jesus, with one production which had been tapped to run for three months going on for five years.

"I got lucky. I got asked to do this role, and it's the most wonderful blessing of my life," he says, explaining that he met his wife, dancer Leeyan Granger, in one of the productions. He had two children with her.

Neeley, a practising Baptist who had a spiritual upbringing -- leading Bible readings for children at just nine years old -- said the show's appeal is its ability to speak across generations.

"It's a wonderful piece. Children love it, they learn the story, they adore the melodies," he said.

"We are all connected to this spirituality, it is magical."