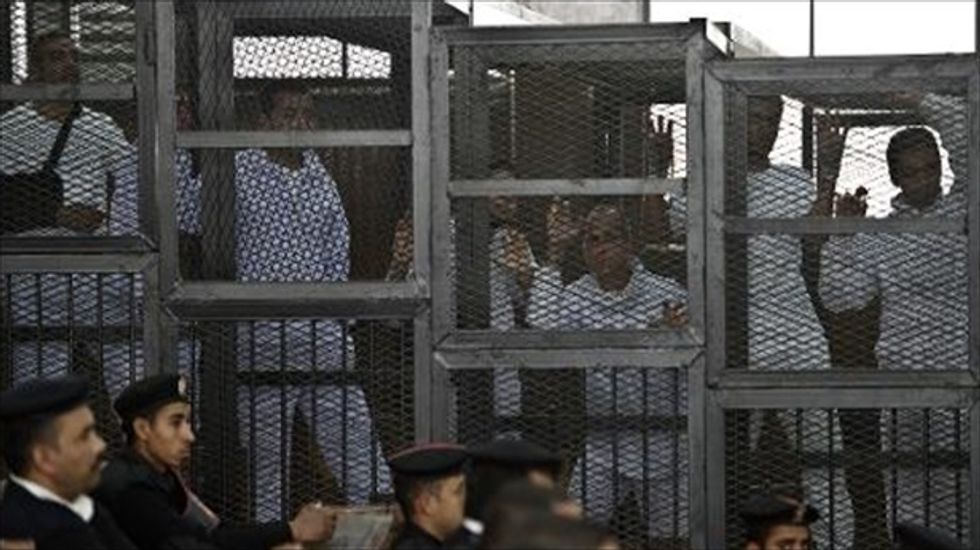 Australian journalist Peter Greste (C) of Al-Jazeera and his colleagues stand inside the defendants cage during their trial for allegedly supporting the Muslim Brotherhood at Cairo's Tora prison on March 5, 2014 [AFP]

Al-Jazeera said Monday it has filed a claim against Egypt, demanding $150 million in damages suffered during a crackdown on the Qatar-based satellite network.

The pan-Arab television network said it lodged a formal "notification of dispute" with Egypt's military-installed interim government over damage since July 2013, when the army ousted Islamist president Mohamed Morsi.

Qatar had been a staunch supporter of Morsi and Al-Jazeera was accused of biased coverage in favour of his Muslim Brotherhood.

If there is no settlement within six months, Al-Jazeera said on its English-language website that it would "send the case to international arbitration".

It said the claim was based on a bilateral investment treaty between Cairo and Doha, under which investors from both sides should be afforded fair and equitable treatment.

The network said that since Morsi's overthrow its journalists and staff "have been subjected to a sustained campaign of harassment and intimidation."

"The interim government's actions have included ransacking and closure of Al Jazeera offices, confiscation of equipment, jamming of transmission and arbitrary detention of journalists. Its broadcast license has been revoked and its Cairo branch was subjected to compulsory liquidation of assets," it added.

Four journalists working for the network remain in custody and six others have been tried in absentia, it added.

Prosecutors allege that Al-Jazeera's foreign and Egyptian journalists had colluded with Morsi's Muslim Brotherhood movement and falsely sought to portray Egypt as being in a state of "civil war" since his overthrow.

Africa has 54 countries, more than one-quarter of the 195 nations on the planet today. The continent is also home to roughly 1.3 billion souls, more than one-sixth of the human population. And despite comprising a large chunk of the community of Homo sapiens, however, Africa is responsible for less than four percent of the world's greenhouse gas emissions.