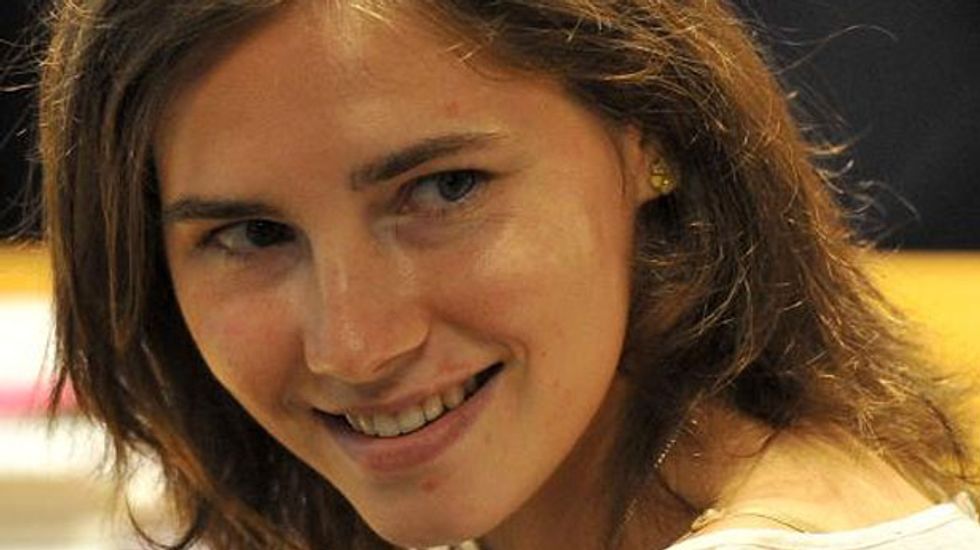 Florence appeals court rules UK student killed by group, driven by desire to bully and humiliate her, not solely by Rudy Guede

An Italian court has said Amanda Knox delivered the fatal blow to the British exchange student Meredith Kercher in a group attack on her, driven by a desire to bully and humiliate the 21-year-old.

In reasoning made public three months after it sentenced Knox, the Seattle-based student, to 28 years and six months in prison, the Florence appeals court said it had rejected the defence's argument that Rudy Guede, an Ivorian man already serving time for the murder, had acted alone.

The injuries on Kercher's body were indicative of multiple attackers, it said. But, while Guede could have been motivated by "sexual instinct", it was not credible to believe that the murder had occurred as part of a group sex game gone wrong, as had been suggested previously, as this was incompatible with what was known of Kercher's character.

Rather, the court said, domestic tensions between the two female housemates had developed into a full-blown conflict.

"It is a matter of fact that at a certain point in the evening events accelerated. The English girl was attacked by Amanda Marie Knox, by Raffaele Sollecito, who was backing up his girlfriend, and by Rudi Hermann Guede, and constrained within her own room," the document, running to more than 300 pages, said.

In its January verdict the court, led by the judge Alessandro Nencini, sentenced Sollecito, now 30, to 25 years for the murder of the Leeds University student in the Umbrian town of Perugia.

Sollecito and Knox have strongly denied any involvement in the murder, insisting they were not present at the house on via della Pergola the night Kercher was killed and that they could not have committed the crime, for which, they say, they had no motive.

According to the Florence court, however, they acted "out of a desire to bully and humiliate" Kercher, who was unable to fight back because she was overpowered by multiple aggressors.

The document said a knife found in Sollecito's kitchen was wielded by Knox and caused a fatal wound to the left part of Kercher's neck. "The court considers that the blade which produced the lesion on the left of the victim's neck from which most of the blood was lost, which provoked Meredith Kercher's death, was  held  by Amanda Knox," the text said.

During the six-and-a-half years since the 2007 murder, Knox and Sollecito have been convicted by a first grade court, acquitted by an appeals court in Perugia, had those acquittals quashed by the Italian supreme court and been found guilty a second time following a second appeal in Florence.

Their lawyers insist there is no concrete evidence to convict them and say the DNA evidence on which the prosecution has based much of its case should be thrown out. They are now taking the case back to the supreme court for another ruling, expected next spring.

The court, known as the cassazione, could either send it back for a third second-tier appeal, or it could confirm the convictions definitively. Only then would Knox and Sollecito be officially considered guilty under Italian law.

Sollecito, who is prevented from leaving Italy following the January ruling but otherwise free, was recently photographed taking his current girlfriend to visit via della Pergola. He would have to return to prison if found guilty.END He spent four years in jail, from 2007 to 2011.

Knox, now 26 and living in the US, would be expected to become the object of an extradition request from the Italian authorities. It is unclear whether such a request would be successful.

Giulia Bongiorno, a defence lawyer for Sollecito, rejected the findings of the court, accusing it of "at least 10 blatant errors per page" in its reasoning.

Knox issued a statement in which she maintained her innocence: "I am innocent of the accusation against me, and the recent Motivation document does not – and cannot – change the fact of my innocence: Experts agreed that my DNA was not found anywhere in Meredith's room, while the DNA of the actual murderer, Rudy Guede, was found throughout that room and on Meredith's body. This forensic evidence directly refutes the multiple-assailant theory found in the new Motivation document. This theory is not supported by any reliable forensic evidence.

"I will now focus on pursuing an appeal before the Italian Supreme Court. I remain hopeful that the Italian courts will once again recognize my innocence. I want to thank once again, from the bottom of my heart, all of those – family, friends, and strangers – who have supported me and believe in my innocence."