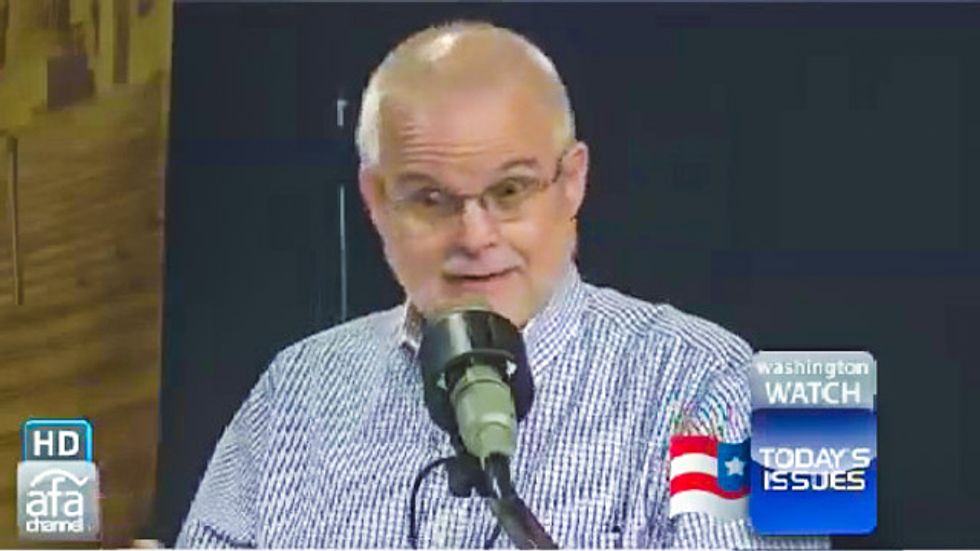 Buddy Smith, the leader of a group that opposes equal rights for LGBT people, argued this week that businesses in Mississippi were "bullying" Christians by advertising non-discrimination policies.

As WLOX reported last week, Mitchell Moore, the owner of Campbell's Bakery in Fondren, started providing local businesses with "We Don't Discriminate" decals after his state passed the Mississippi Religious Freedom Restoration Act to give companies the right not to serve gay and lesbian customers.

"We hoped really that we as business owners could finally speak for ourselves and not have politicians speaking for us," Moore explained. "They kept using business as an excuse, saying, you know, ‘We need this for businesses so that we can prevent discrimination against Christians.'"

He added: "We're in Mississippi. I've never been discriminated against as a Christian."

By Friday, the blue stickers had been distributed to over 400 businesses.

"It may be political, but I'm not making that stance," Moore said. "This is about business. This is about a business owner and local business saying, 'Hey, don't listen to the politicians. We will sell our product to everybody."

But in an interview with One News Now on Monday, American Family Association Executive Vice President Buddy Smith suggested that the decals were an assault on Christian freedoms.

"It's not really a buying campaign, but it's a bully campaign," he asserted. "And it's being carried out by radical homosexual activists who intend to trample the freedom of Christians to live according to the dictates of scripture."

"They don't want to hear that homosexuality is sinful behavior – and they wish to silence Christians and the church who dare to believe this truth."

Smith warned that businesses that agreed to display the non-discrimination sticker were complicit in taking away the rights of Christians.

"If you do that, you are agreeing with these businesses that Christians no longer have the freedom to live out the dictates of their Christian faith and conscience," he insisted.

WLOX.com - The News for South Mississippi