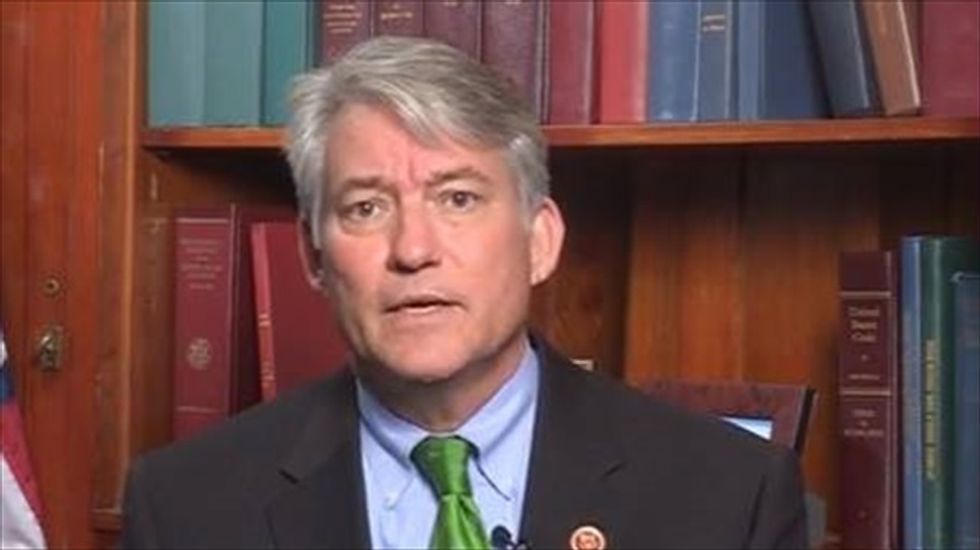 A Florida GOP congressman faced pushback from his constituents over raising the minimum wage, with one man directly challenging him to work at a local fast food restaurant for a day, Think Progress reported.

"Lay your tie and your suit down, just for a day, 24 hours, and take a walk in my shoes," Shaneeka Rainer told Rep. Dennis Ross (R-FL) in video taken from a town hall meeting in Tampa. "The people that I work with, we’re keeping the economy floating and going in the cycle. But the people that hire, they're just paying money, just throwing money. But I'm actually working every day. So why wouldn't you support it?"

Rainer made his challenge to Ross after the two-term incumbent told him he would not support raising the minimum wage.

"I think it would do more harm to our economy than anything," Ross explained. "You work at Arby's, the cost of products, the cost of services are going to go up. Markets do work. I'm not suggesting we do away with the minimum wage, that's not it at all. But the minimum wage is not a career wage. It's a wage to pay to make sure workers aren't taken advantage of by business owners. But if we are going to make it a living wage, who's going to pay for it? Who's going to pay for it?"

At that point, another constituent can be heard saying, "I will. I'll pay 20 cents extra for a hamburger."

"He said he'll pay," Rainer told Ross, pointing toward the other person. "So if he'll pay, and I'm going to work every day busting my butt, I want to know, would you take a walk in my shoes?"

Without addressing Rainer's challenge, Ross held to his position regarding a wage increase, saying it was not right economically.

"It does more harm to our economy," he said again. "I was a child at age 12 mowing lawns. I have worked my entire life. I have walked that path many times that you're working today. I'm glad that I did, because it built in me an appreciation for what I know this country allows me to have, and that is the enjoyment of the fruits of my labor. And if the government's going to tell me how much I can get paid and when I can work and when I can't work, then we have a serious problem in this country."

He also asked the audience how much more government they wanted in their lives, to which one person said from off-camera, "More than we got."

Rainer told Think Progress after the meeting he felt Ross blew his question off.

"I bust my butt for these people everyday," he was quoted as saying. "Come down to Arby's for 24 hours. Take the broom, wipe down the bathroom. See what it's like."

In 2011, Ross proposed privatizing federally-owned lands as a way to help the U.S. raise money to pay the national debt.

Watch the video, as posted by Think Progress, below.