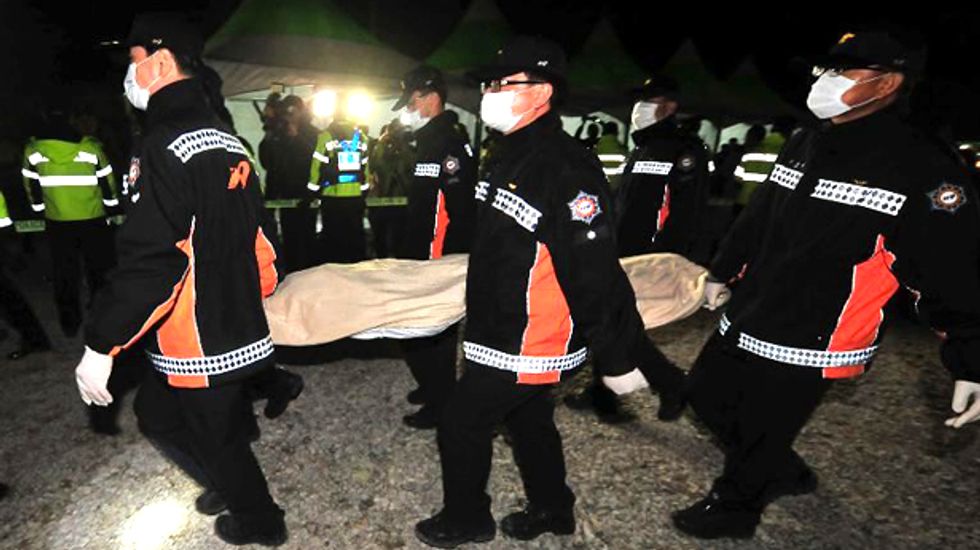 Divers retrieved more than a dozen bodies on Sunday from the submerged South Korean ferry that capsized four days ago with hundreds of children on board, opening a grim new chapter in the search and recovery process.

Three bodies -- the first to be retrieved from the ship's interior -- were pulled out just before midnight and another 10 were recovered later Sunday morning, a coastguard spokesman said.

The breakthrough followed days of fruitless efforts by more than 500 divers to access the interior of the capsized ship, while battling powerful currents and near-zero visibility.

Their recovery looks set to dash the slim hopes of distraught relatives who had clung desperately to the idea that some passengers may have survived in air pockets in the upturned vessel.

The confirmed death toll from the disaster now stands at 46 with 256 people still unaccounted for.

Of the 476 people on board when the 6,825-tonne Sewol capsized and sank on Wednesday morning, more than 350 were high school students headed for the holiday island of Jeju.

Few details were provided of the 13 bodies recovered, but relatives of the missing gathered on Jindo island -- close to the disaster site -- have begun providing DNA samples to facilitate identification.

Although officials have not ruled out the possibility of finding survivors, the emergency operation is clearly transitioning from one of rescue to recovery.

Three giant floating cranes have been at the disaster site off the southern coast of South Korea for days, but the coastguard has promised it will not begin lifting the ferry until it clear there is nobody left alive.

Divers only managed to access the ferry interior for the first time on Friday, more than 48 hours after it sank.

The bereaved families camped out in a gymnasium on Jindo island have sharply criticised the pace of the rescue operation, accusing officials of incompetence and indifference.

On Sunday morning, close to 200 relatives set off on what they said was a protest march from Jindo to the presidential Blue House in Seoul --- some 420 kilometres (260 miles) to the north.

They were prevented from crossing a bridge from the island to the mainland by a force of several hundred police, who turned them back after some minor scuffles.

Investigators have arrested the ferry's captain, Lee Joon-Seok and two of his crew -- criticised for abandoning hundreds of passengers still trapped in the ferry, as they made their own escape.

Lee was charged with negligence and failing to secure the safety of passengers in violation of maritime law.

All three were paraded before TV cameras at their arraignment, dressed in dark raincoats with their hoods pulled up and their heads bowed.

Questioned as to why passengers had been ordered not to move for more than 40 minutes after the ship first foundered, Lee insisted he had acted in their best interest.

"At the time a rescue ship had not arrived. There were also no fishing boats or other ships around to help," Lee said.

"The currents were very strong and the water was cold at that time in the area.

"I thought that passengers would be swept far away and fall into trouble if they evacuated thoughtlessly," he added.

Experts have suggested many more people might have escaped if they had moved to reach evacuation points before the ship listed sharply and water started flooding in.

Only 174 were rescued when the ferry sank and no new survivors have been found since Wednesday.

For those relatives ready to accept the worst outcome, the coastguard had set up a tent near the gym to take DNA tests to facilitate eventual identification of recovered bodies.

"I was still hanging on to some hope," said Han Mi-Ok, whose teenage son was listed as missing.

"But now I'm bracing myself for the worst," said Han who provided a DNA sample on Saturday.

It is still not clear what precisely caused the crash, although the investigation is focused on tracking data showing the vessel made a sharp turn just before sending its first distress signal.

A tight turn could have dislodged the heavy cargo manifest -- including more than 150 vehicles -- and destabilised the vessel, causing it to list heavily and then capsize.

Captain Lee confirmed he was not at the helm when the ship ran into trouble.

The ship was being steered by a 55-year-old helmsman identified by his surname Jo, under the supervision of the female third officer who had never navigated that particular stretch of water before.

"It may have partly been my fault," Jo said at the arraignment. "But the steering gear rotated unusually fast."