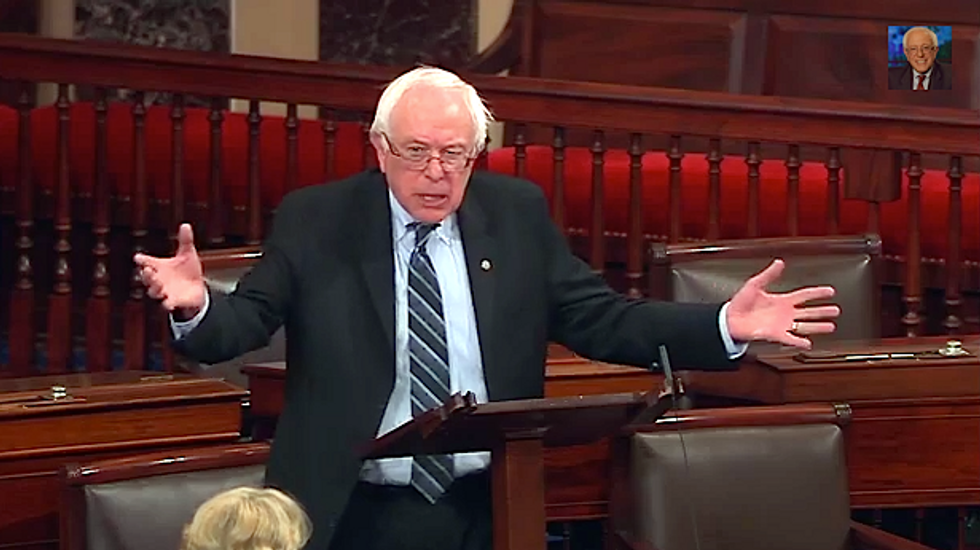 Sen. Bernie Sanders (I-VT) asked Thursday whether the U.S. was evolving into an oligarchy during a speech on the Senate floor.

“We are moving toward a situation where people such as the Koch brothers and Sheldon Adelson have so much money it would hardly matter to them to write a check for more than both Obama and Romney spent in the last presidential election,” Sanders said. “They could write out a check for $2 billion, and it would be insignificant – a fraction of their increase in wealth over a one-year period.”

The Koch brothers, who fund a variety of conservative political operations, saw their wealth increase from $68 billion to $80 billion in just one year, Sanders said.

He said the loosening of restrictions on campaign spending favored by conservatives had imperiled representative government.

“I do not believe democracy is about a handful of billionaires, such as the Koch brothers or Sheldon Adelson, being in a position in which they can spend as much money as they want on any political race in this country,” Sanders said. “It is very hard for me to imagine how anybody could defend that as being democracy. It is not. It is oligarchy.”

He said millions more Americans must become engaged in the political process to push back against greedy billionaires who are “not content to have $10 billion or $20 billion in wealth.”

“They feel the need to have more and more and more and to take that money out of the hides of working families, the elderly, the children, the sick, and the poor,” Sanders said. “They want more tax breaks for billionaires, and then they want to cut Social Security, Medicare, Medicaid, education, and every other program that is of importance to working families.”

The senator, who is mulling a presidential run to offer a true progressive option, said he was voicing the concerns of voters all over the country who feared wealth inequality had derailed the American dream.

“There was the feeling that economically what America was about, and what we celebrated, was the great middle class,” Sanders said. “People today, both from an economic perspective and from a political perspective, are beginning in a very serious way to question that reality.”

He said the U.S. had the most unequal distribution of income of any major country in the world – including European countries that still maintain kings, queens, and other hereditary royalty.

“If you had a big pizza with 100 slices in it, one person would get 38 percent of those pieces of pizza, if we looked at wealth, and the bottom 60 percent of the people would have to share 2.3 percent of the pizza,” Sanders said. “I don't think that is what America is supposed to be about, and that situation is getting even worse.”

He said millions of Americans were working longer hours for less and less money while paying more for health care and seeing their pensions shrink.

“Do you want to know why people are angry, why people are concerned, and why people are worried what is going to happen to their kids?” Sanders asked his Senate colleagues. “It is because the median family income has gone down by $5,000 since 1999.”

Meanwhile, he said, 95 percent of all new income generated between 2009 and 2012 – during the Great Recession – went to the top 1 percent.

“More and more income goes to the millionaires and billionaires, while millions of people are working longer hours for lower wages, and while we have the highest rate of childhood poverty, at 22 percent, of any major country on Earth,” Sanders said.

The senator said he was astonished that the typical male worker made $283 less than he would have in 1970.

Amazingly, he said, the typical female made $1,775 less than she would have just seven years ago, before the recession.

“We have more people living in poverty than ever before, and that is 46.5 million people,” Sanders said. “Here is a fact that should frighten everybody: That is, half of Americans have less than $10,000 in their savings account right now. Can you imagine that? That means if your car breaks down and you need that car to get to work or you have a serious health problem and you don't have particularly good health insurance, there it goes. It goes.”

That prevents Americans from retiring with dignity, he said because Social Security wasn’t enough to supplement living expenses on just $10,000 in savings.

He compared the top-heavy distribution of wealth to post-Soviet Russia.

“After the collapse of the Soviet Union, a small number of bureaucrats were able to steal a lot of public property, and they became multibillionaires,” he said. “They controlled oil companies, banks, gold mines, aluminum companies, television stations, and other state-owned companies, and that is how they became oligarchs.”

That allowed just five oligarchs to control most or all of Russia’s industrial production by 2001, he said.

“That is the direction in which we are moving,” Sanders said.