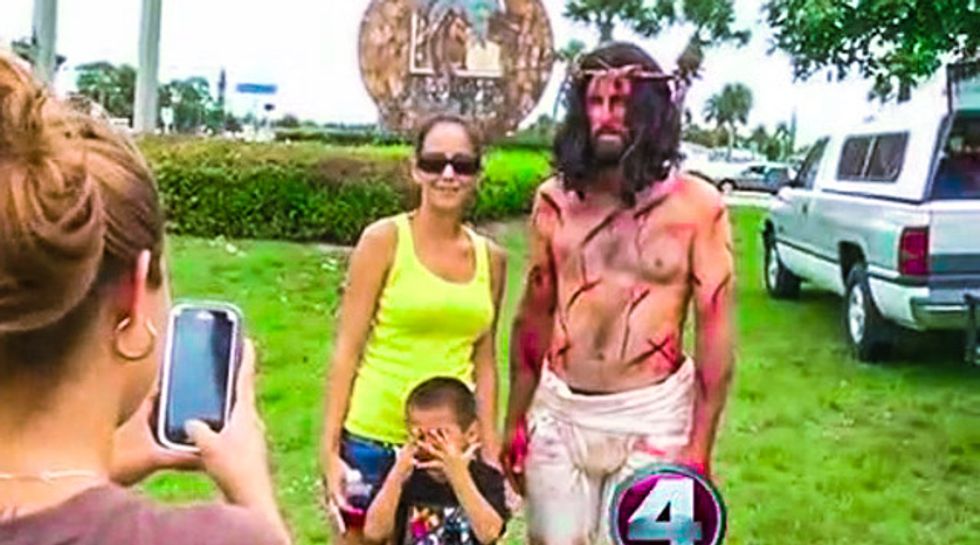 A Jesus impersonator in Florida had his roadside Easter show interrupted by police who said that the bloody display was causing drivers to nearly crash their vehicles.

The spokesperson for the Lee County Sheriff's office told WFTX that the man playing Jesus was asked to come down off the cross after drivers complained.

An event organizer admitted that authorities said the display caused "near accidents," and "that we're on public property, and we shouldn't be here."

"There were a lot of close calls with accidents and traffic back ups," he recalled the sheriff saying.

The nearly-naked man playing Jesus, whose makeup made him appear bloody and scarred, told the station that he climbed up on the cross because "Easter is not about bunny rabbits."

"This what our Christ endured for us. For our sins," he said. "And to hide that, is to not to live to the true faith of what he did for us."

"It's just one of those necessities," the actor added.

While some Lee County residents found the fake blood "inappropriate" for children, others were outraged that the crucifixion show was being called off.

"Kids need to see how he was born and hung from the cross for us," one woman said.

"Jesus is appropriate for everywhere," another woman agreed.