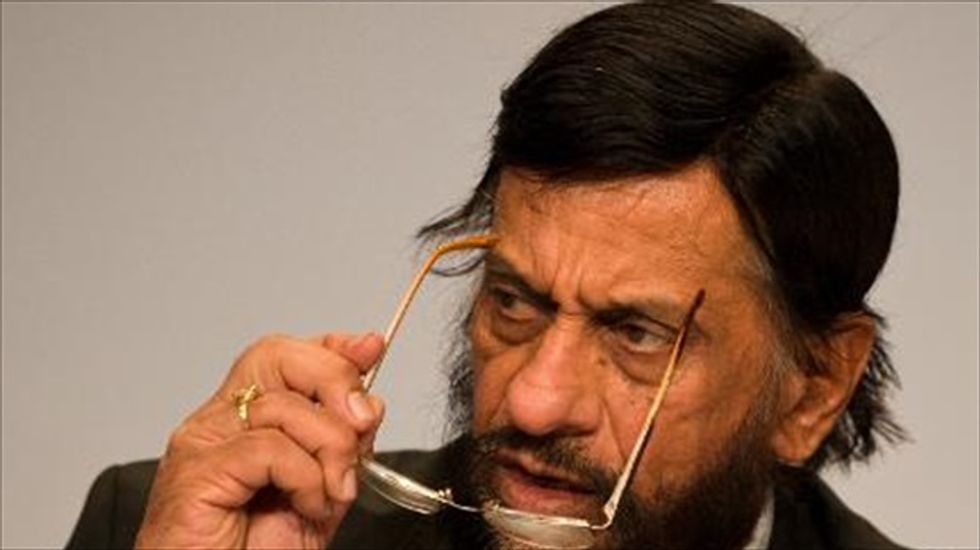 Rajendra Pachauri, Chairman of the Intergovernmental Panel on Climate Change (IPCC), addresses a press conference in Berlin on April 13, 2014 [AFP]

Bollywood's glitterati on Thursday heard an appeal to use their star power to fight climate change as they opened their first awards ceremony in the United States.

Bringing a somber note in the midst of Bollywood's trademark festive dancing, Rajendra Pachauri, the Indian scientist who leads the Nobel Prize-winning UN climate panel, took the stage in Tampa, Florida, to urge stars to channel their influence for the planet.

"We are all residents of spaceship Earth and anything we do -- anything that happens on that spaceship -- has implications for everybody else," said Pachauri, who was invited to Bollywood's annual awards extravaganza as a special guest.

"What I would like to urge all the stars who are here is to see that they associate themselves with the larger problems that humanity, and all living species of the world, face," he told Bollywood celebrities assembled in a heavily air conditioned hotel ballroom.

Pachauri, chairman of the Intergovernmental Panel on Climate Change, which recently issued its latest stark warning, said that average sea levels have risen 19 centimeters (seven and a half inches) over the past century and could rise as high as 98 centimeters by the end of the century without action.

Pachauri said that he spoke before the Bollywood ceremony to Florida Governor Rick Scott, a Republican who has expressed doubt about the science on climate change, and told him that the coastal state was "particularly vulnerable."

The International Indian Film Academy awards will take place Saturday at the 66,000-capacity stadium of American football's Tampa Bay Buccaneers after several days of events including a forum with Indian investors.

The award organizers each year choose a site outside India in hopes of showing Bollywood's global clout, but had never before held the event in the United States, even though the country has become Indian cinema's largest overseas market.

Tampa, which has a history of holding major events, pushed to bring the Bollywood awards, whose organizers threw a dance party in a park on Wednesday evening in hopes of reaching out to the public.

Mayor Bob Buckhorn voiced hope that Tampa would become a household name for Bollywood lovers and an Indian investment destination. He insisted that his city -- which has historic roots in the American South -- has embraced the awards and Indian culture.

"When I walk down the street and hear somebody with an Alabama accent say 'namaskar,' I know we've come a mighty long way," said Buckhorn, folding his hands in a traditional Bollywood greeting.

Then, in what would be an apt ending to a Bollywood film, Buckhorn -- a former university lacrosse player who would not be easily mistaken for an Indian celebrity -- took to the stage and strutted his best moves alongside superstar Anil Kapoor.

"Now my political career is over. Maybe I can run for office in Mumbai," Buckhorn quipped.