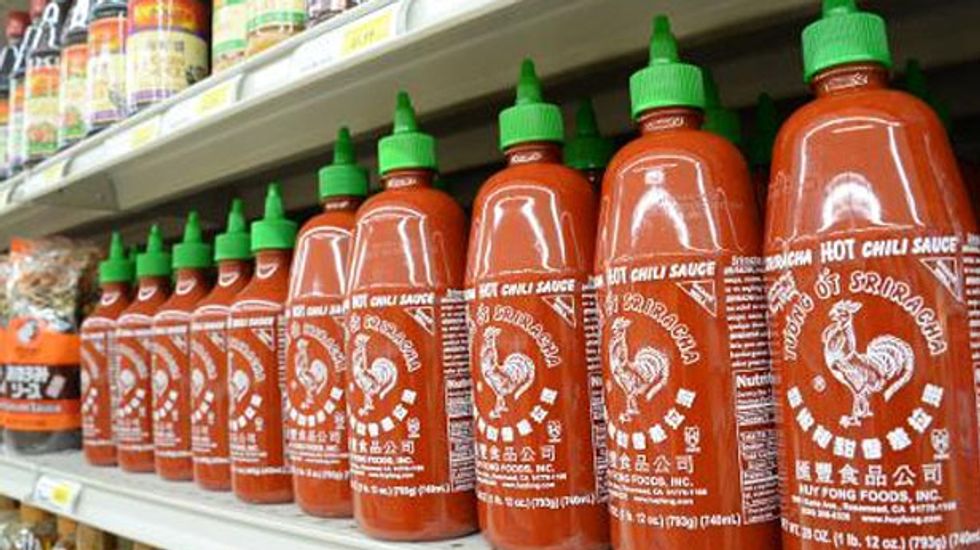 A U.S. congressman from a Los Angeles community is seeking to lure the factory that makes the bestselling Sriracha-brand hot pepper sauce to his district after residents in its current location complained about the smell.

U.S. Rep. Tony Cardenas, a Democrat whose district includes much of the San Fernando Valley, wants to convince David Tran, the owner of Huy Fong Foods company which makes the hot sauce, to relocate rather than continue to fight with the residents of the city of Irwindale, California.

On Tuesday, Cardenas met Tran and toured the factory which makes the Sriracha Hot Chili Sauce, one of the top-selling condiments in the United States. The red-colored liquid is sold in clear squeeze bottles with a green cap and trademark rooster logo.

Cardenas said the company grossed $60 million in sales from its Sriracha brand alone last year, with little marketing, and hailed Tran, an ethnic Chinese immigrant from Vietnam who founded his company in Los Angeles in 1980, as "an American success story."

Huy Fong Foods hires 70 full-time employees and 200 seasonal workers and produces over 20 million bottles of hot sauce yearly. "My district has a long history of manufacturing, and we would welcome your company with open arms," Cardenas wrote in a letter to Tran last week.

The Irwindale City Council was expected to vote Wednesday night on a resolution declaring the plant's peppery fumes a public nuisance, giving Huy Fong 90 days to remedy the smell.

The vote comes after the city filed a lawsuit against Huy Fong last October saying the strong smell of peppers being crushed at the plant was causing headaches and irritating the eyes and throats of nearby residents, forcing some to remain indoors during the day.

A Los Angeles Superior Court judge ordered the hot sauce maker in November to curb noxious emissions from the plant but stopped short of requiring a shutdown as sought by the city.

Cardenas said he noticed little odor inside the plant and none whatsoever outside, although he acknowledged that chili-grinding season was still months away.

"We have some local elective officials who aren't willing to be fair with a business that they asked to come and set up shop in their city," Cardenas told Reuters. "It's unfortunate."

Cardenas is one of many politician seeking to woo Sriracha and its coveted manufacturing jobs.

The company says it has more than two dozen invitations from officials across the country, several in Texas.

The Republican Party leaders in Los Angeles County have also rallied to defend Sriracha, with the local Central Committee approving a resolution urging Irwindale to "take such actions as necessary" to keep Huy Fong Foods in the area.

The committee has also organized a demonstration in support of Huy Fong before Wednesday's Irwindale City Council meeting.