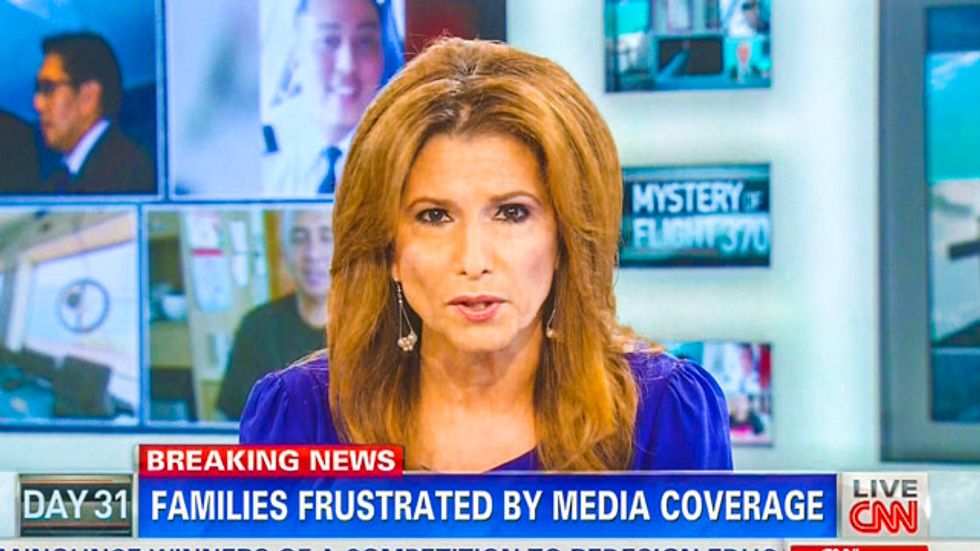 After 31 days of filling airtime about missing Malaysian Flight 370, CNN broke the news on Monday that families were "frustrated" by coverage that was "not based on facts."

On Monday, CNN host Carol Costello noted that in light of the latest news that so-called "pings" had been detected near the suspected crash site of Flight 370, families of the victims were tiring of the fact-less coverage.

"Foreign media, including CNN, covering the missing plane mystery are taking heat in Kuala Lumpur," reporter Joe Johns pointed out. "The constant drumbeat of stories and the absence of hard facts about the fate of the plane have created a public relations nightmare, and bruised the Malaysian national self-image."

But if CNN learned anything from this "breaking news," it was not immediately apparent because the next segment the network advertised was about how "some have compared the search to missing flight 370 to looking for a needle in a haystack."

Costello promised to talk to "one expert" who was expected to say that pinging sounds in the ocean "could be that haystack."

CNN's total number of viewers climbed by 42 percent between February and March thanks to the missing flight coverage. And younger viewers increased by 53 percent.