George Will: Obama and Holder blurt out 'race card' because of liberal 'Tourette syndrome' 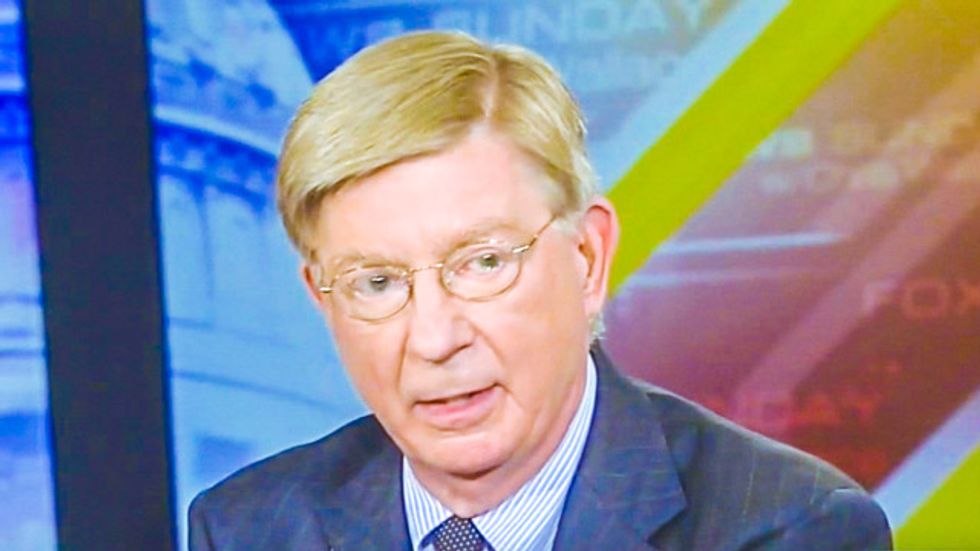 Fox News contributor George Will on Sunday accused Attorney General Eric Holder, President Barack Obama and other liberals of having a mental disorder that made them repeatedly "play the race card."

Speaking to Rev. Al Sharpton’s National Action Network in New York on Wednesday, Holder had reflected on the way that Rep. Louie Gohmert had treated him during a recent hearing, and noted that many black leaders were facing the same type of “ugly and divisive” civil rights issues.

Fox News Senior Political Analyst Brit Hume asserted on Sunday that both Obama and Holder had "benefited politically enormously from the fact that they are African-American, and the first to hold the jobs that they hold."

"To those two men, race has been both a shield and a sword that they have used effectively to defend themselves, and to attack others," Hume said, adding that he found the behavior "depressing."

A Fox News viewer on Twitter complained to the panel that the president and attorney general "race bait," and wanted to know why it was acceptable to call white people "racists."

"Look, liberalism has a kind of Tourette's syndrome these days," Will opined. "Just constantly saying the word 'racism' and 'racist.'"

"Liberalism hasn't had a new idea since the 1960s -- except Obamacare -- and the country doesn't like it," he continued. "Foreign policy is a shambles, from Russia to Iran to Syria to the Israeli-Palestinian conflict. And the recovery is unprecedentedly bad."

"So, what do you do? You say, 'Anyone who criticizes us is a racist.'"

Will argued that racism had become a joke among young people, who he said called each other "racists" for remarking on the weather.

"It is so inappropriate, the constant invocation of this, that I think it is becoming a national mirth."