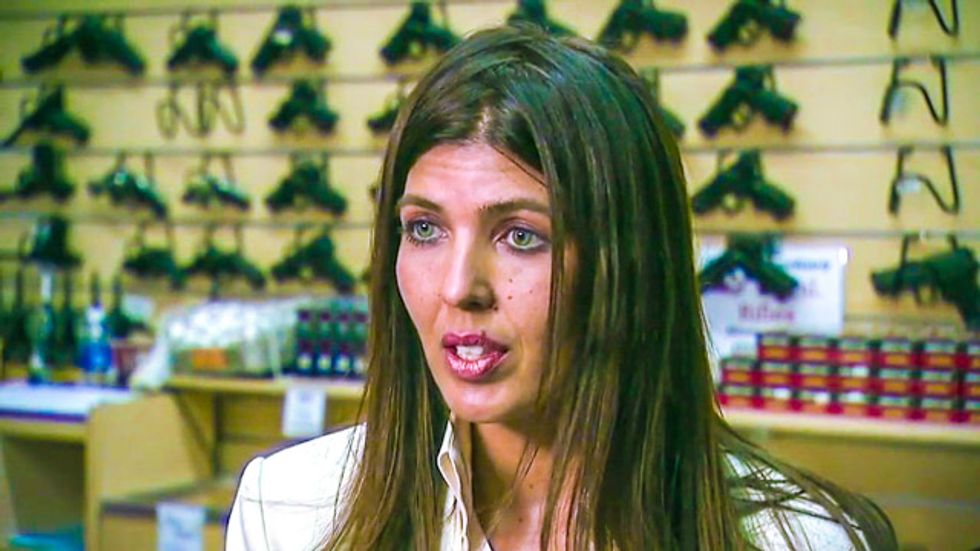 Belinda Padilla, president and CEO of the U.S. division of firearm manufacturer Armatix, says she was stalked and threatened by "gun enthusiasts" after she tried to bring a safer handgun to market.

Armatix, a German company, has developed so-called "smart guns" that can only be fired by the owner. The company uses a watch that ties the owner to the weapon, called the iP1. Armatix is already selling the personalized weapons in Europe and Asia.

In an interview published by The New York Times on Monday, Padilla explained what happened when a forum of online "gun enthusiasts" published her cellphone number.

She said it began with a "few fuming-mad voice mail messages and heavy breathers" that got her to stop answering her phone.

And then photos of her home were posted online.

"In a crude, cartoonish scrawl, this person drew an arrow to the blurred image of a woman passing through the photo frame. 'Belinda?' the person wrote. 'Is that you?'" according to the Times.

The Armatix USA CEO said that President Barack Obama's administration had supported her company's efforts after the December 2012 shootings at Sandy Hook Elementary School in Connecticut. But it had been difficult to bring the gun to market because of opposition from the gun lobby.

“Right now, unfortunately, these organizations that are scaring everybody have the power,” Padilla explained. “All we’re doing is providing extra levels of safety to your individual right to bear arms. And if you don’t want our gun, don’t buy it. It’s not for everyone.”

The Oak Tree Gun Club near Los Angeles had agreed to sell the Armatix smart pistol until Calguns.net, a forum of second-amendment rights advocates, found out about the news.

“I have no qualms with the idea of personally and professionally leveling the life of someone who has attempted to profit from disarming me and my fellow Americans,” one comment said.

Within days, any trace that Armatix merchandise had ever been at the Oak Tree Gun Club had vanished.

“Honestly, I was in disbelief,” she recalled. “It’s like I never existed.”

Padilla said that she now worries that even people emailing her for information about buying the gun actually wish to do her harm.

But she vowed not to give up.

“This is my mission in life,” she insisted. “If they really understood our technology, they wouldn’t be afraid of it at all.”

Watch the video below of Padilla explaining how her iP1 works to PBS, broadcast Oct. 17, 2013.