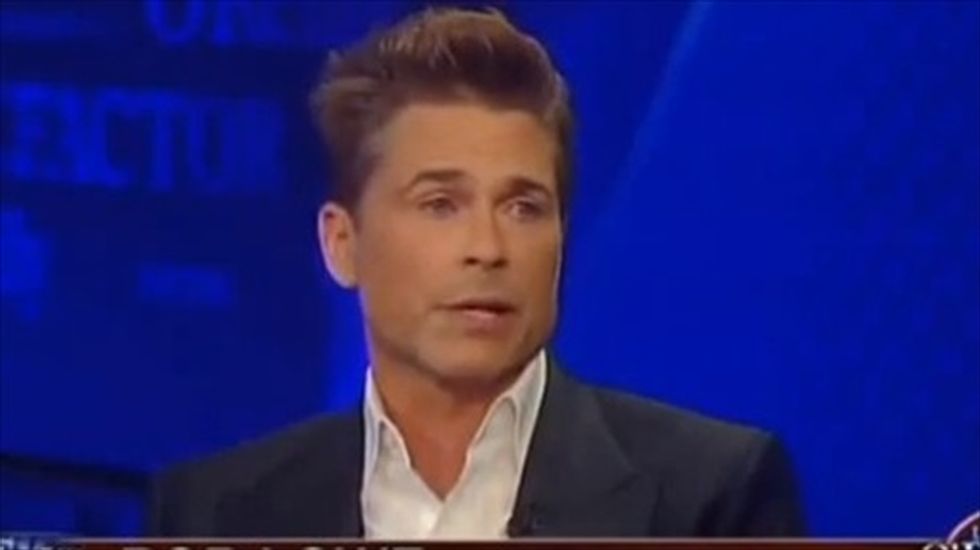 Actor Rob Lowe appeared on Fox News host Bill O'Reilly's show on Wednesday to explain how good-looking people suffer for their beauty, and discovered that he might be a libertarian.

"Individuals usually do a better job than the government," Lowe told O'Reilly, standing by his statement in a New York Times interview that, "I want the government out of almost everything."

"So you don't want the government to be telling you how to live and how not to," O'Reilly said, following up. "That's kind of a libertarian position."

"Does that make me a libertarian?" Lowe asked. "I'm a Hollywood pinhead, Bill. I don't know about political labels."

"He is unbelievable," Lowe said of Putin. "He is a boss."

"You should play Putin," O'Reilly told him.

"And you wouldn't mind going topless every hour on the hour," O'Reilly said.

Lowe also joked to O'Reilly that "studies show, worldwide, at least 10 or 20 people a year suffer from good-looking bias," following up on a statement in his latest book decrying an "unbelievable bias and prejudice against quote-unquote good-looking people, that they can't be in pain or they can't have rough lives or be deep or interesting."

"You're telling me that, because you're a pretty boy, you don't get the real gravitas parts that someone like Daniel Day Lewis would get," O'Reilly said. "Is that what you're saying here?"

Lowe responded that he has been told he can't play a "PTA father" despite being a PTA member, only to be pushed toward taking a role as a "rich jerk."

"But you would be great for that," O'Reilly said.

"'Cause I am a rich jerk," Lowe quipped in response. In his book, however, Lowe says that he has been assured by "learned men of psychiatry" that he is not the "benevolent narcissist" Parks and Recreation co-star Rashida Jones describes him to be.

Watch O'Reilly's interview with Lowe, as posted online on Wednesday, below.