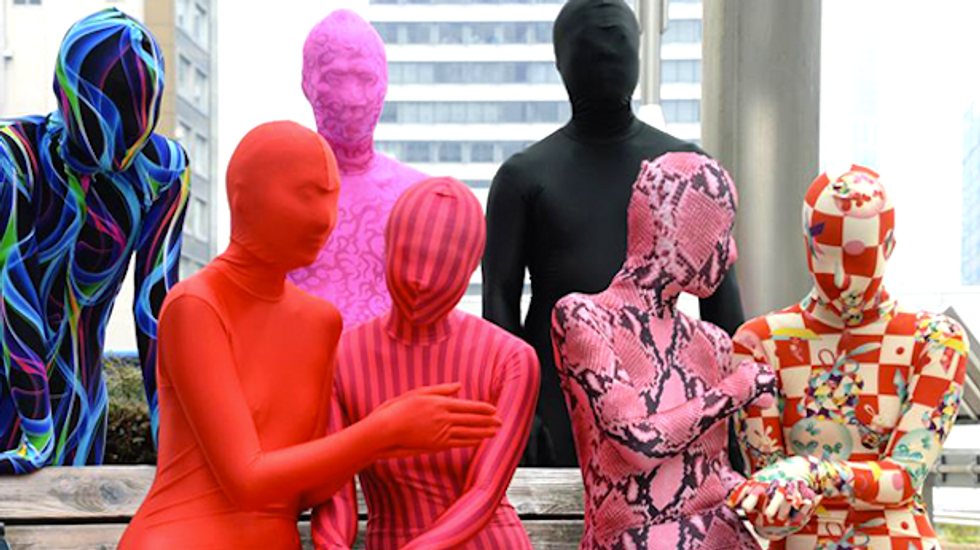 By day, she is a mild-mannered office clerk, whose modest make-up and conservative hairstyle make her blend in to any crowd.

By night, she dresses in a skin-tight, all-in-one Spandex body suit that covers everything -- including her eyes -- and sits in bars, alone but liberated, she believes, from the judgement of others.

"With my face covered, I cannot eat or drink like other customers," said the woman, who is in her 20s and says her name is Hokkyoku Nigo (North Pole No. 2).

"I have led my life always worrying about what other people think of me. They say I look cute, gentle, childish or naive," she said, her lips ruffling the tight, red shiny material. "I always felt suffocated by that. But wearing this, I am just a person in a full body suit."

Hokkyoku Nigo is part of a small subset in Japan with a fetish for wearing outfits called "zentai" -- an abbreviation of "zenshintaitsu", which means "full body suit" -- who say they are seeking liberation by effacing the physical self.

"I was always fascinated by hero costumes as a child," said member Hanaka, 22, who was introduced to the club by her 25-year-old boyfriend, Popo.

"When I was 13 or 14, I even tried to make a full-body suit myself, sewing stockings together. But I stopped, thinking maybe I was doing something weird.

"I was really happy when I finally found out on the Internet that there were people like me out there," said Hanaka, who always comes to Tokyo Zentai Club events with Popo.

While the hobby is a long way from being mainstream in Japan, a country with an unsurpassed ability to dream up slightly off-the-wall pastimes, it makes occasional appearances in popular culture.

Among the most prominent was a movie of comedy vignettes that each focused on common but crushingly awkward social situations that were resolved through a conversion to zentai wearing.

In one, a recipe-blogging housewife who is a victim of bullying by a group of homemakers gives up the fight against the over-bearing leader and finds liberation in a circle of zentai lovers.

In seeming homage to the superheroes whose unspoken presence informs adherents' costume choices, a young man dressed as a Power Ranger made headlines in Japan after it was revealed he hangs around at the entrance to a subway station to help young mothers carry their baby buggies down stairs.

While some might have good deeds on their minds as they slip inside their suits, others acknowledge there is something sexual about the practice.

"I like to touch and stroke others and to be touched and stroked like this," said a 36-year-old teacher, Nezumiko.

"Once you are in one of these suits, you can feel the person, instead of looking at them. I am not a lesbian, but I wouldn't mind being with a woman like this ... In zentai, it is a completely different kind of sensation from straight sex."

Academic Ikuo Daibo of Tokyo Mirai University said zentai fans seem to be groping for a different way of expressing their own identity.

"In Japan, many people feel lost; they feel unable to find their role in society," he said. "They have too many role models and cannot choose which one to follow."

He said they take solace from the erasing of their outward appearances and say they believe it offers a way for people to get to know others as they are, rather than because of how they look.

"In a way, they are trying to expose their deeper self by hiding their own identity," said Daibo. "I find it a very interesting way of communication."

Alice Omori, 40, a practitioner for around 20 years who now runs an Internet-based tailoring service for fellow zentai fetishists, agreed.

"You can feel so good and happy just by wearing this," he told AFP as he stood in his custom-made suit, cut to cleave tightly to the outline of his head, hands, penis and feet.

"You can savor more mentally-fulfilling communication with others," he said. "It is such a wonderful thing."