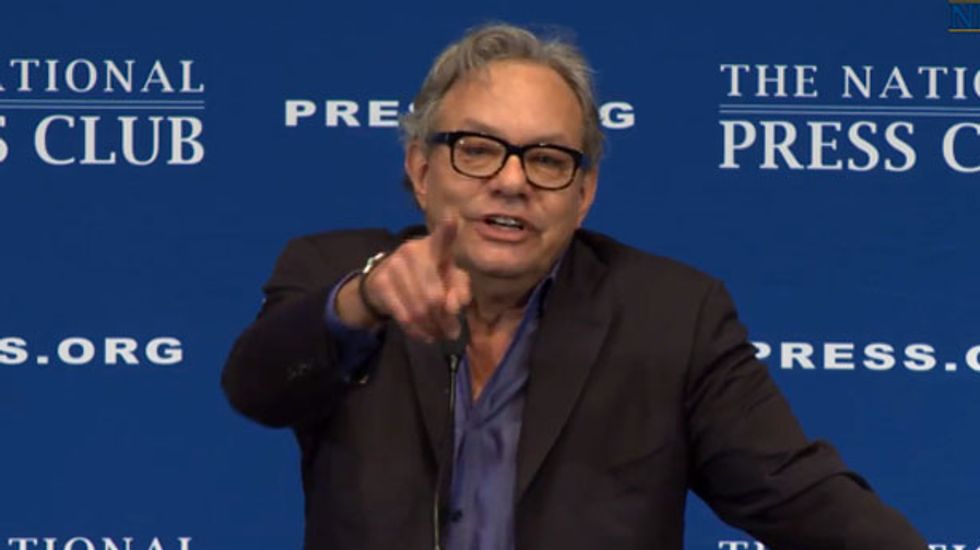 Lewis Black appears at the National Press Club on April 14, 2014.

Comedian Lewis Black on Monday explained why he considered himself a socialist, and mocked those who accused President Barack Obama of being one.

"And I really just wanted to start with that because the idea of calling anyone, outside of maybe Bernie Sanders, a socialist -- to call Obama a socialist, you have got to be out of your godd*mn mind. There are seven socialists left in the country, and if you really want to see the leadership of the socialist party you can go to cemetery and find them."

"We have no effect," Black said. "As a matter of fact, when I was a kid you actually read about them, and I can't imagine in many of the history books, which have also kind of forgotten evolution is a real thing, that socialism is even really discussed historically."

Later in his speech, Black explained why he believed in the merits of socialism.

"Part of the reason I believe in socialism is because if you are going to have a Christian philosophy, if that is going to be the basis of the country that you live in, and it is a Christian philosophy -- and I know this because I'm a Jew -- that you might want socialism, because what it is is enforced Christianity. You put your money where your mouth is and shut up. We are not going to wait on you to help the poor, you're going to help the poor, like it or not."

Black said journalist Edward R. Murrow's documentary "Harvest of Shame," and witnessing the slums in Washington, D.C. had a profound impact on his political views. As a child it "did not compute," he said, why his housemaid had to live in squalor while he lived a comfortable middle-class life.

"If I hear another thing about entrepreneurs and the fact that what we really need are more entrepreneurs -- how do you think that happens, asshole! How do you think an entrepreneurs happens? It's some schmuck generally who has some sort of learning disorder who is totally focused on some thing that you would never obsess about -- it is hard to find them! ... But to say that it is all going to be done from the private sector is psychotic."

Black also railed against the gridlock in Congress.

"This is nonsense. To watch the fact that jobs aren't being created. Just the beltway alone was built by idiots, and it continues to just be a piece of shit, and you live with it. You live with it! There are ways to get things done. These people actually have to sit down and do it, and the fact that you live here, you're job should be, you should quit your jobs and just go and stand around Congress and say you're not coming out until some sh*t gets done."