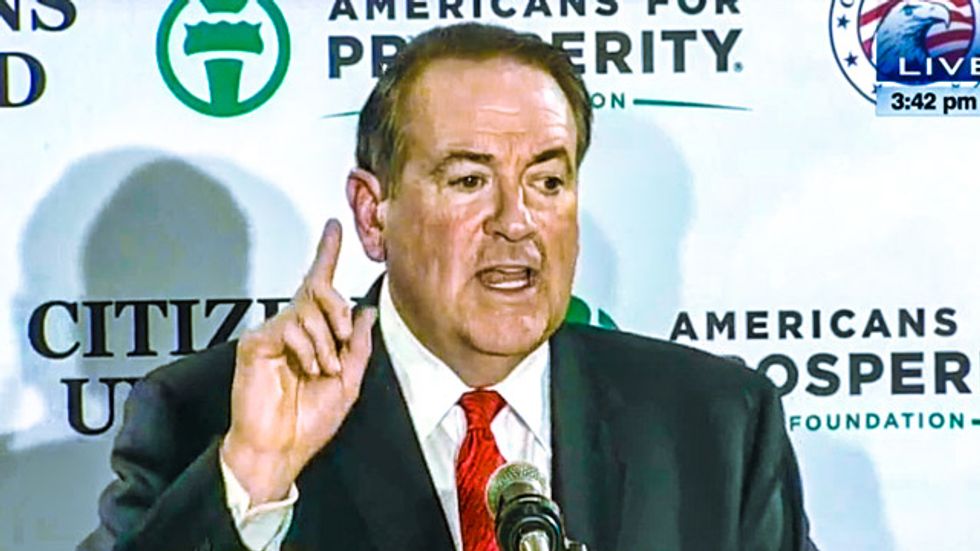 Fox News host Mike Huckabee on Saturday suggested to a group of conservatives that there was "more freedom in North Korea" than the United States had under President Barack Obama.

Speaking at the New Hampshire Freedom Summit, Huckabee opined that "threats and affronts to our freedom today are so incredibly frightening."

"Freedom of speech in this country, that for which the men grabbed their muskets off the mantel, did never mean that we're to have fewer voices, but more voices," the former Arkansas governor said at the event, which was sponsored by Koch brothers-backed Americans For Prosperity and Citizens United.

"My gosh, I'm beginning to think that there's more freedom in North Korea sometimes than there is in the United States," he continued. "When I go to the airport, I have to get in the surrender position while people put hands all over me. And I have to provide photo ID in a couple of different forms, and prove that I really am not going to terrorize the airplane."

Huckabee added: "But if I want to go vote, I don't need a thing. All I got to do is show up and I can give them anybody's name, and that's okay."

To mock President Obama's opposition to voter photo ID laws, the Fox News host said he wanted to show up at the White House without an ID.

"I figure if I can vote without one, I ought be able to come in there and look around without one too," he said.