Obama reaffirms commitment to Japan on tour of Asian allies 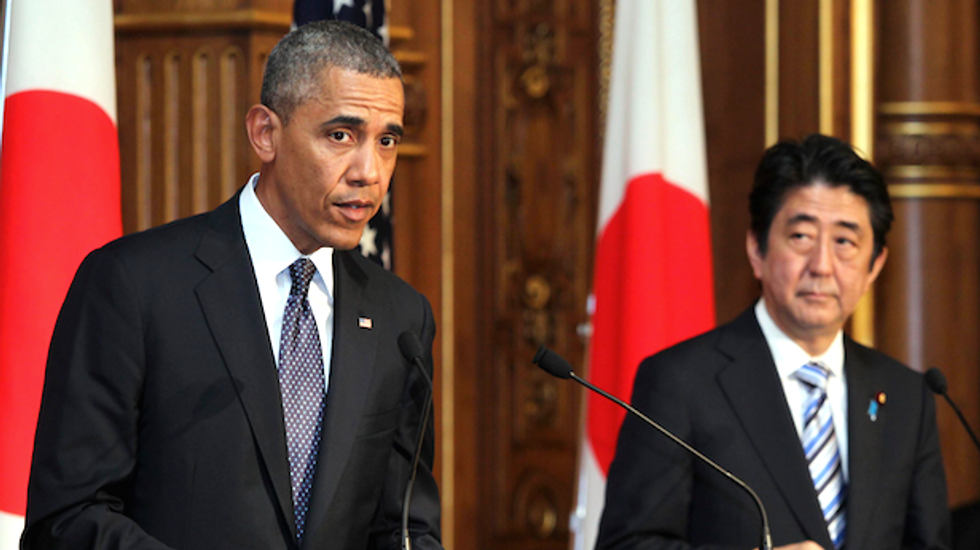 U.S. President Barack Obama assured ally Japan on Thursday that Washington was committed to its defense, including of tiny isles at the heart of a row with China, but denied he had drawn any new "red line" and urged peaceful dialogue over the islands.

His comments drew a swift response from China, which said the disputed islets were Chinese territory.

Obama also urged Japan to take "bold steps" to clinch a two-way trade pact seen as crucial to a broad regional agreement that is a central part of the U.S. leader's "pivot" of military, diplomatic and economic resources towards Asia and the Pacific.

U.S. and Japanese trade negotiators failed to resolve differences in time for Obama and Prime Minister Shinzo Abe to shake hands on a deal at the summit.

Obama, on the start of a four-nation tour, is being treated to a display of pomp and ceremony meant to show that the U.S.-Japan alliance, the main pillar of America's security strategy in Asia, is solid at a time of rising tensions over growing Chinese assertiveness and North Korean nuclear threats.

"We don't take a position on final sovereignty determinations with respect to Senkaku, but historically they have been administered by Japan and we do not believe that they should be subject to change unilaterally and what is a consistent part of the alliance is that the treaty covers all territories administered by Japan," Obama said.

"This is not a new position, this is a consistent one," he told a joint news conference after his summit with Abe, using the Japanese name for the islands that China, which also claims sovereignty over them, calls the Diaoyu.

"In our discussions, I emphasized with Prime Minister Abe the importance of resolving this issue peacefully," Obama added.

Whilst his comments amounted to a restatement of longstanding U.S. policy, there was symbolism in the commitment being stated explicitly by a U.S. president in Japan.

"The so-called U.S.-Japan security treaty is a product of the Cold War era and it cannot be aimed at a third party and ought not to harm China's territorial sovereignty," he said.

"No matter what anyone says or does, it cannot change the basic reality that the Diaoyu Islands are China's inherent territory and cannot shake the resolve and determination of the Chinese government and people to protect (our) sovereignty and maritime rights."

Obama also said there were opportunities to work with China -- which complains that his real aim is to contain its rise -- but called on the Asian power to stick to international rules.

"What we've also emphasized, and I will continue to emphasize throughout this trip, is that all of us have responsibilities to help maintain basic rules of the world and international order, so that large countries, small countries, all have to abide by what is considered just and fair," he said.

Some of China's neighbors with territorial disputes with Beijing worry that Obama's apparent inability to rein in Russia, which annexed Crimea last month, could send a message of weakness to China.

Obama told the news conference that additional sanctions were "teed up" against Russia if it does not deliver on promises in an agreement reached in Geneva last week to ease tensions in Ukraine.

"This is not something we can reach a conclusion (on) in a short period of time," Amari told reporters after meeting Froman again after the leaders' summit.

Abe has touted the Trans-Pacific Partnership (TPP) as key to the "Third Arrow" of his economic program to reinvigorate the world's third-biggest economy, along with hyper-easy monetary policy and fiscal spending.

Both sides have also stressed that the TPP would have strategic implications by creating a framework for business that could entice China to play by global rules.

But the talks have been stymied by Japan's efforts to protect politically powerful agriculture sectors such as beef, and disputes over both countries' auto markets.

Pointing to restrictions on access to Japan's farm and auto sectors, Obama said: "Those are all issues that people are all familiar with and at some point have to be resolved. I believe that point is now."

Experts had said failure to reach a final deal could cast doubts on Abe's commitment to economic reform and take the wind out of the sails of a drive for a broader TPP agreement.

"If they don't show progress ... it will be harder to use TPP as a spur to reforms," said Robert Feldman, a managing director at Morgan Stanley MUFG Securities in Tokyo. "It gives the anti-reform forces aid and comfort."

The diplomatic challenge for Obama during his week-long, four-nation regional tour is to convince Asian partners that Washington is serious about its promised strategic "pivot", while at the same time not harming U.S. ties with China, the world's second-biggest economy.

Obama will also travel to South Korea, Malaysia and the Philippines.

Abe -- who repeatedly referred to the U.S. president as "Barack" during their news conference -- and Obama were keen to send a message of solidarity after U.S-Japan ties were strained by Abe's December visit to Tokyo's Yasukuni Shrine, seen by critics as a symbol of Japan's past militarism.

Japan lobbied hard to get the White House to agree to an official state visit, the first by a sitting U.S. president since Bill Clinton in 1996.

Abe is trying to soothe U.S. concerns that his conservative push to recast Japan's war record with a less apologetic tone is overshadowing pragmatic policies on the economy and security.

"Seventy years ago, when the war ended, Japan gave grave damage and pain to many people, particularly people in Asia. Japan started taking post-war steps by reflecting on this. Japan and Japanese people have continued to take the path of peace for the past 70 years," Abe told the joint news conference.

"Japan has strived to create a free and democratic country after the war. We have been building a country that respects human rights and the rule of law," he said.