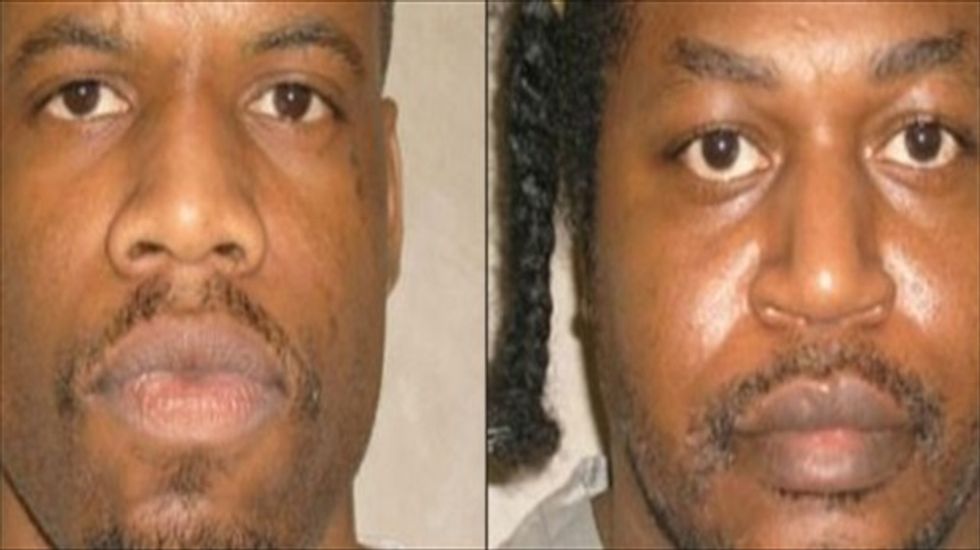 A prison execution in McAlester, Oklahoma went wrong Tuesday night, with an inmate reportedly losing and regaining consciousness before the procedure was halted -- and then the inmate died of a heart attack following the botched procedure.

CNN reported that prisoner Clayton Lockett (pictured above, left) was injected with a new three-drug combination that began with the sedative midazolam at 6:23 p.m.

The state Supreme Court ruled earlier this month that Lockett and inmate Charles Warner (also pictured above, right) had the right to challenge the state's secrecy regarding the components of the lethal mix.

Warner's execution, which was also originally scheduled for Tuesday, has been postponed for 14 days. Gov. Mary Fallin (R) said in a statement that she has ordered an evaluation of the mix used for lethal injections.

Associated Press correspondent Bailey Elise McBride also reported on Twitter that, according to officials, Lockett "was conscious and blinking, licking his lips even after the process began."

The AP also reported that at 6:36 p.m. -- three minutes after being declared unconscious -- Lockett began "breathing heavily, writhing on the gurney, clenching his teeth and straining to lift his head off the pillow." Three minutes after that, a doctor examined where he had been injected, and the blinds were lowered on the execution chamber.

"There was some concern at that time that the drugs were not having that (desired) effect, and the doctor observed the line at that time and determined the line had blown," State Director of Corrections Robert Patton said in a statement following Lockett's death, adding that he called for the execution to be cancelled shortly afterward. Lockett was pronounced dead at 7:06 p.m. from a heart attack.

Lockett was convicted in 2000 for shooting 19-year-old Stephanie Neiman in 1999 during a robbery and watching as his accomplices buried her alive.