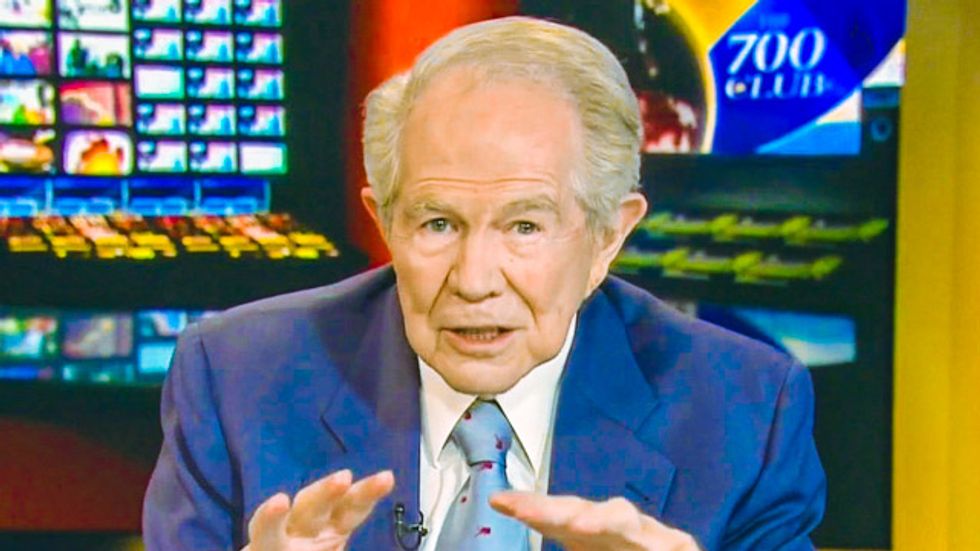 Televangelist Pat Robertson warned on Monday that Jesus had said that an asteroid would destroy the Earth -- and it could happen as soon as next week.

On Tuesday, three former NASA astronauts are expected to present their findings that the Earth had experienced far more impacts from large asteroids than previously thought.

For Robertson, the news was just the latest reason to hype his book, The End of the Age, which asserts that the End Times predicted in Revelation will be brought on by a meteor.

"I wrote a book!" Robertson advised viewers. "It deals with an asteroid hitting the Earth. I don't see anything else that fulfills the prophetic words of Jesus Christ other than an asteroid strike."

He continued: "We're big enough to draw some of them in. And as somebody said, it's 'blind luck.' Well, it's the mercy of the Lord. But if that mercy ever got lifted, whew."

Robertson advised his viewers to "read what Jesus said" about "nobody living on the face of the Earth."

"That's what Jesus himself said!" he advised. "So, hey, just get ready. Get right. And stay right with the Lord."

"It could be next week, it could be 1,000 years from now. But nevertheless, we want to be ready whenever the Lord says, 'I'm wrapping it up, and it's time to come home.'"