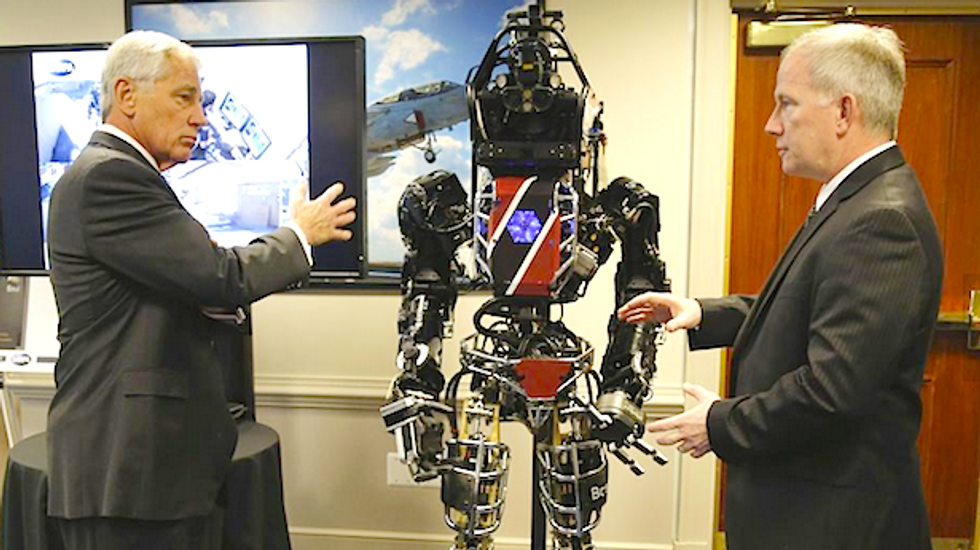 U.S. Defense Secretary Chuck Hagel got a first-hand look at a life-size robot that resembles Hollywood's "Terminator," the latest experiment by the Pentagon's hi-tech researchers.

But unlike the cinematic version, the hulking Atlas robot is designed not as a warrior but as a humanitarian machine that would rescue victims in the rubble of a natural disaster, officials said on Tuesday.

The 6-foot-2-inch Atlas is one of the entrants in a contest designed to produce a man-like life-saver machine, the brainchild of the Defense Advanced Research Projects Agency (DARPA).

The competition, which will require the bots to navigate rough terrain and enter buildings, was created in the aftermath of Japan's Fukushima quake and tsunami disasters.

DARPA, the Pentagon's research arm known for futuristic projects often evoking science fiction, showed off the Atlas robot to Hagel, but except for LED lighting, the humanoid was apparently switched off on a "static" display.

Brad Tousley, head of DARPA's Tactical Technology Office, told Hagel that Hollywood has created unrealistic expectations of what real robots can do.

Scientists also showed Hagel the latest technology for prosthetics, including a mechanical hand that responds to brain impulses and a prosthetic arm controled by foot movements.

A wounded veteran who once worked with Hagel in the 1980s demonstrated one of the devices, giving the Pentagon chief a thumbs up with his prosthetic left arm.

"It's the first time in 45 years, since Vietnam, I'm able to use my left hand," said Fred Downs, who lost his limb in a landmine explosion during the war.

He controlled the device using two accelerometers strapped to his feet, manipulating the elbow, wrist and fingers.

"He and I worked together many years ago," said Hagel, referring to a stint in the Veterans Administration during Ronald Reagan's presidency. "How you doing, Fred? How's your family?"

Hagel said the new technology would have a dramatic effect on the lives of wounded soldiers.

"This is transformational," he said. "We've never seen anything like this before."

Justin Sanchez, a medical doctor and program manager at DARPA who works with prosthetics and brain-related technology, showed Hagel a video of a patient whose brain had been implanted with a sensor, allowing her to control a mechanical arm with her thoughts.

Scientists then displayed a shiny black mechanical hand and arm that responds to brain impulses, and said sensors would be attached to allow the fingers to send sensations back to the brain.

The tactile feedback system should be operational within a few months, officials said.

"People said it would be 50 years before we saw this technology in humans," Sanchez said. "We did it in a few years."

DARPA managers showed Hagel other technologies, but reporters were ushered out after the first three demonstrations due to concerns about revealing military secrets.

A US defense official who spoke on condition of anonymity said Hagel was given an update on "PLAN X," a cyber warfare project, a system to link tactical air controllers using tablets and a new long-range anti-ship missile that would be less dependent on global navigation systems.

Watch this video of the robot posted online by Top World News: