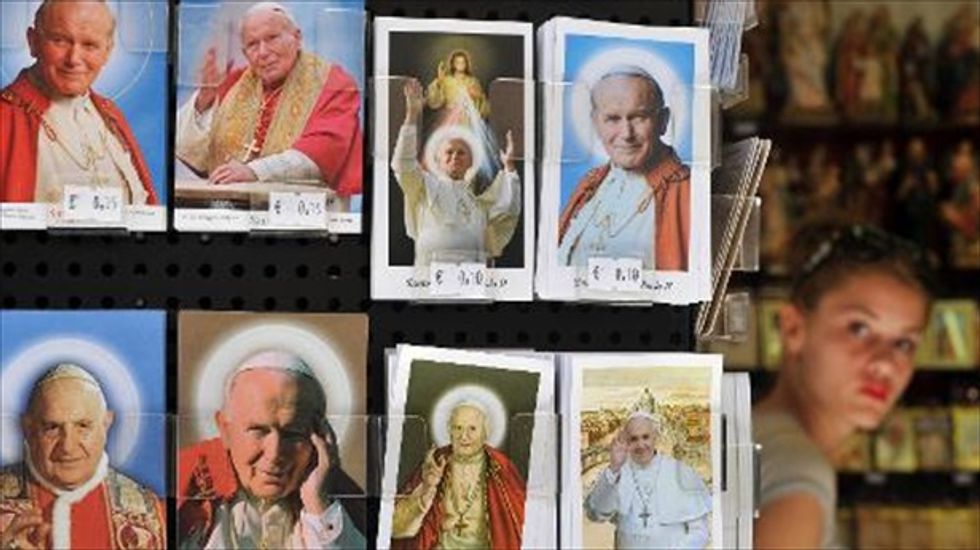 Thousands of pilgrims held a night of prayer in Rome as Pope Francis and Benedict XVI prepared to confer sainthood on John Paul II and John XXIII in a historic effort to unite the Catholic Church.

Religious chants rang out as pilgrims settled down with sleeping bags and picnic chairs to be first in line for Sunday's ceremony in the Vatican honouring two of modern Catholicism's most influential figures.

Some faithful posed next to cardboard cut-outs of the future saints, while others prayed with rosary beads and one group of teenagers wore baseball caps reading "Karol" in honour of the Polish pontiff Karol Wojtyla.

"We came to Rome out of love for John Paul II. Being here is a dream," said Elizavet Kendzha, a Polish pilgrim in a red poncho on Via della Conciliazione, the main avenue leading up to St Peter's Basilica.

"John Paul II gave the Polish people freedom!" the 54-year-old said, pointing to a giant portrait of John Paul II hanging from the basilica alongside one of John XXIII, remembered as "Good Pope John".

Over one million faithful are expected at what will be a unique event, with a mass presided by Pope Francis that will be co-celebrated with his 87-year-old predecessor Benedict XVI in a rare public appearance.

The pope emeritus, in his papal white cassock, will be sitting alongside red-robed cardinals near the altar.

The kings of Belgium and Spain were also expected, as well as Zimbabwean President Robert Mugabe -- despite a ban from entering the European Union, which does not apply in the sovereign Vatican state.

The late popes will join the official roster of saints in the first-ever canonisation of two popes at the same time, which is being seen by experts as an attempt to unite conservatives and reformists.

By sainting them together, Francis "is speaking not just to the outside world but to rival camps within the Catholic fold who see John XXIII and John Paul II as their heroes", said US-based Vatican expert John Allen.

German priest Joseph Vinecker -- one of the thousands taking part in prayer vigils across Rome -- said he was looking forward to "a mythical day" on Sunday.

"It will be a great feast for our Church and especially for us Catholics who will all be united," he said.

John XXIII had only been credited with one of the two supposed miracles required for saints, but the 77-year-old Francis approved his canonisation anyway, saying that the pope who died in 1963 was so widely adored that he did not need a second miracle.

The Italian pope was seen as a peacemaker who saved thousands of Jews when he was a Vatican envoy in Turkey during World War II and he helped put an end to age-old Catholic prejudices against Jews when he became pontiff as well as helping to ease the Cuban Missile Crisis.

John Paul II also inspired widespread admiration for reaching out to other religions and for his firm condemnation of Soviet Communism and the Mafia and his ability to fire up young people and lay movements.

But he was also accused of hushing up child sex crimes by priests which began to come to light in Ireland and the United States at the end of his pontificate.

At his funeral in 2005, loyal faithful chanted "Santo subito!" (Sainthood now!) and his canonisation has been the fastest since the 18th century when the current rules for conferring sainthood were put in place.

Italy's civil protection agency has 3,500 volunteers on hand, including 25 Polish cultural guides and 20 psychiatrists trained in dealing with panic attacks.

The Vatican's official bureau for pilgrims said 4,000 coaches bearing pilgrims would be arriving in the run-up to the 10:00 am (0800 GMT) mass, along with special trains and boats, while other faithful will watch the canonisations in 3D at cinemas across the world, from Francis's native Argentina to Lebanon.

Among the pilgrims was German vintage car enthusiast Marek Schramm, who drove to Rome in a 1958 Polish-made car that belonged to John Paul II before he became pope and has the initials "JP2" on its numberplate.