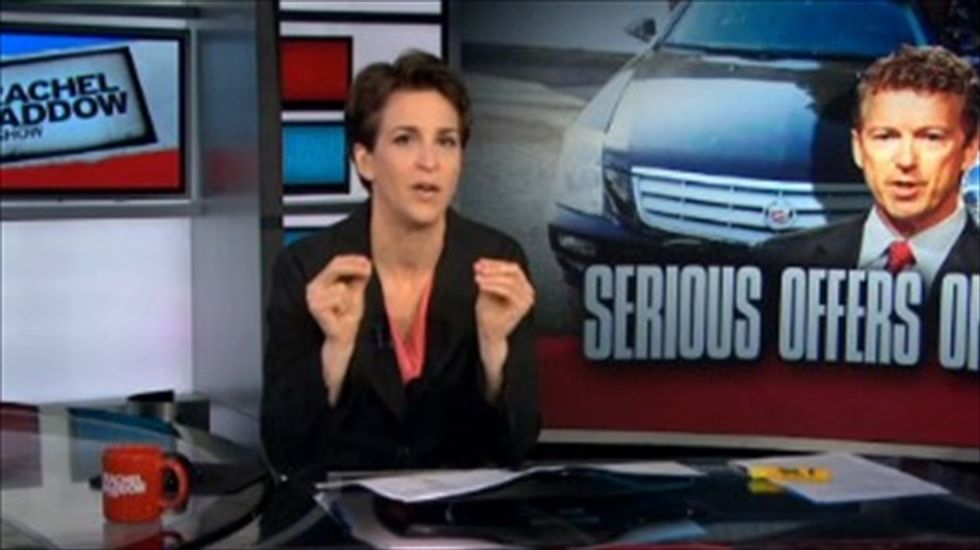 Sen. Rand Paul (R-KY) might now be forced to choose not only which political office he wants most, but which kind of political figure he wants to be, MSNBC host Rachel Maddow said on Thursday.

"This calls the question of whether or not he and his father's brand of Republicanism is actually about holding office and not just running for it," Maddow said.

Maddow said that Paul's father, former Rep. Ron Paul (R-TX) was "basically a protest candidate for national office," which allowed him to voice his platform on the larger Republican political stage and nudge the party further to the right while also maintaining his grip on a congressional seat as he spent time continually fundraising and seeking national support.

"But no one -- including Ron Paul, I think -- ever thought that he was ever anything but a protest candidate, that he was ever going to be president," Maddow said. "Running was its own end. He held on to that House seat from Texas for decades."

But the Democrat-controlled Kentucky House of Representatives, Maddow explained, ran out the clock on a bill that would have allowed Rand Paul to seek the presidency in 2016 while allowing him to run for re-election in his district in the same way his father had been able to do in Texas. Instead -- unless House Democrats could be swayed otherwise -- Paul will now have to forego a senatorial re-election campaign if he truly wants to run for president.

The bill did pass the GOP-dominated state Senate, only for state House Speaker Greg Stumbo (D) to tell reporters that Democrats were "still reading" the one-paragraph bill at the time the legislative session ended.

The bill would have added Kentucky to the list of states with "LBJ laws," named after a 1959 Texas statute that was created to allow then Sen. Lyndon Johnson (D-TX) to seek re-election while also running as John F. Kennedy's running mate in the 1960 presidential election. Most recently, Rep. Paul Ryan (R-WI) invoked a similar law in his home state in 2012 and was able to win re-election despite being part of the losing Republican presidential ticket.

Maddow also said that Rand Paul's procedural setback comes at a time when other Republicans are "apopleptic" at the notion that Paul's isolationist views on foreign policy could be gaining traction, since Russia's incursion into Ukraine has thrust foreign policy back into the spotlight.

"That little hurdle may call the question as to whether or not the Republican Party is going to be able to keep swatting him down as a relatively inconsequential senator, the way his dad was a relatively inconsequential congressman," Maddow said. "Or whether this round of the Paul family might actually be willing to run for office in a way that he would have to win, and not just play."