Rachel Maddow: Why is the U.S. so reluctant to confront its own right-wing terrorists? 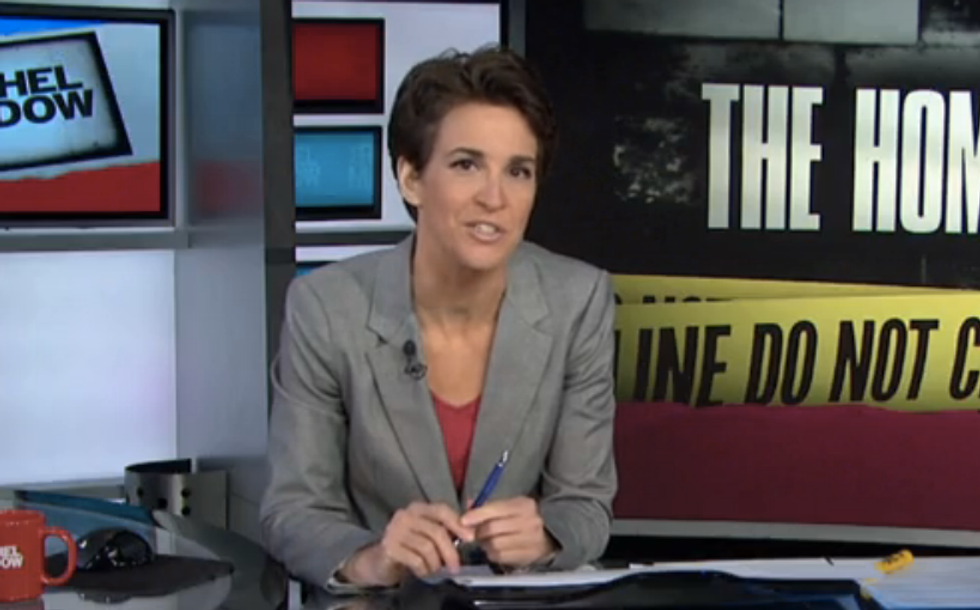 Tuesday night on her MSNBC show, Rachel Maddow discussed the real threat of violence from right-wing extremists here in the U.S. as opposed to Islamic terrorism, which most Americans are much more afraid of.

She began by detailing the arrests in the late 1980s of several members of the Aryan Nation gang, a ring of counterfeiters and criminals who hoped to bring about an all-white homeland, or at least a section of the country devoted to the white race.

In 1987, 15 neo-Nazi leaders of the Aryan Nation were arrested and charged with sedition.

"So that was in 1987," Maddow said. "Really ambitious prosecution brought against all those different white supremacist leaders. They're going after them for trying to overthrow the U.S. government."

By 1988, however, the whole case had fallen apart. One of the government's witnesses, Frazier Glenn Miller, fled his home state of North Carolina, changed his name, and all but disappeared until this past weekend, when he opened fire at a Jewish community center in Overland Park, KS, killing three people.

"Heil Hiter!" shouted Miller at news cameras from the back of a police cruiser.

After he was arrested, Maddow said, "there was still some confusion about his identity" because of his multiple aliases. Miller had been active on the Internet at right-wing sites, posting over 12,000 messages to racist message boards and websites.

One of those message boards, the white supremacist Stormfront.org, was also home to the man who shot up a Sikh temple in Wisconsin before killing himself, a Pittsburgh neo-Nazi murderer and others.

Miller headed his own hub, called Vanguard News, where he kept up an active correspondence with Spokane, WA's failed MLK Day bomber Kevin William Harpham and Craig Cobb, the North Dakota white supremacist who tried and failed to turn the town of Leith into an all-white enclave.

In 2009, the Department of Homeland Security concluded a years-long study of right-wing extremism in the U.S. and released a report saying that ultraconservative white nationalists and other extremists pose a much greater threat to U.S. citizens than Islamic terrorists from overseas.

Conservatives like Laura Ingraham and Rush Limbaugh pitched a huge tantrum, accusing the Obama administration of staging an anti-conservative pogrom, even though the DHS study was commissioned by the Bush administration. In the end, the full study was never released, and the outcry forced DHS to divert resources away from U.S. extremists.

"How weird is it to have Chechen-speaking Russian immigrant Muslim guys reading 9/11 'Truther' conspiracies and ads for Nazi message boards while also espousing violent jihad and allegedly setting off bombs that killed Americans?" Maddow asked.

According to the New America Foundation, she said, since the 9/11 attacks, 21 people have been killed in the name of Islamic extremism in the U.S., whereas the number of people killed by right-wing extremists stands at 34 after the three deaths in Kansas.

Nevertheless, huge swaths of U.S. policy are dedicated to fighting Islamic terrorism abroad, "But when it comes to the proven and interconnected threat of the armed, American extreme right wing, we're still treating every attack by them like a surprise, still treating those attackers like a lone wolf, regardless of however many letters you find between them," regardless of the places where they talk to each other online, "regardless of the tide of evidence that these organizations exist and are operational."

Why won't the country at large acknowledge the real threat of right-wing extremism, she asked. "Should that change?"