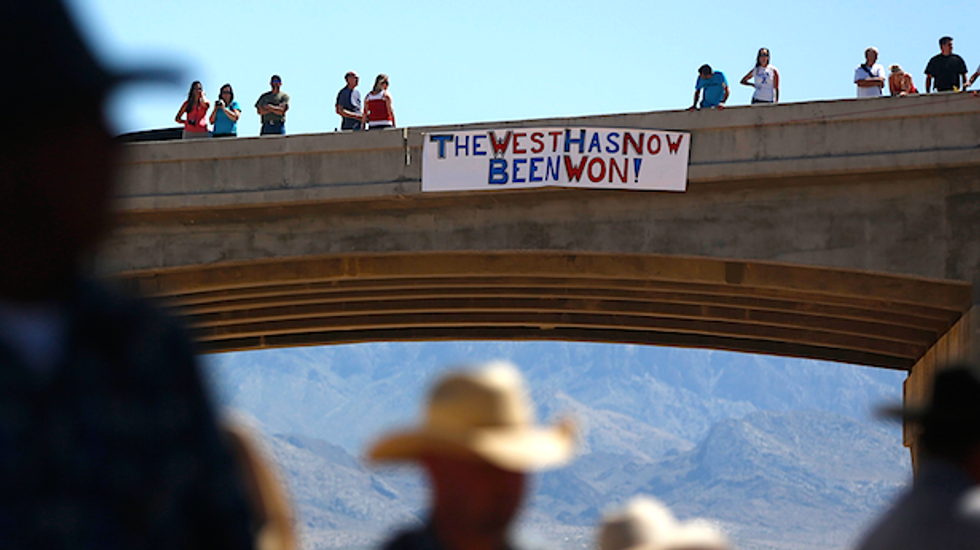 A show of force was necessary to stop the government seizure and sale of embattled cattle rancher Cliven Bundy's cows, his son said on Sunday, a day after an armed standoff between federal agents and hundreds of Bundy's supporters.

"We were dedicated to opening those gates and peacefully walking through to retrieve those cattle," Ammon Bundy said in an interview. "The presence of weapons was needed in order to intimidate them."

The federal Bureau of Land Management began a roundup of the cattle from the Bundy ranch a week ago, contending he owes more than $1 million in back fees, penalties and other costs for grazing his cattle on public land and has ignored court orders.

Bundy stopped paying monthly grazing fees in 1993. The ranch is about 80 miles northeast of Las Vegas.

The issue simmered for a week with verbal and physical altercations and reached a boil on Saturday after nearly 1,000 supporters, included armed militiamen from several western states, rallied on foot and on horseback with the family.

The four-hour standoff temporarily shut down Interstate 15 and ended when the bureau stopped rounding up cattle, citing safety concerns, and then agreed to return the cows.

The Clark County sheriff Doug Gillespie had delivered a bureau offer to leave, but keep the cows, and then helped negotiate the eventual end to the standoff, Bundy said.

"When we went up there, they knew we were serious," Ammon Bundy said. "They wanted to go. This thing was building and building and was going to continue."

Bundy said about 350 of the ranch's cows were recovered from bureau holding pens. Some of the animals were injured and a handful of calves, some so new their umbilical cords remained attached, were being bottle fed, he said.

Bureau officials could not be reached immediately for comment on Sunday. In a statement on Saturday, Director Neil Kornze said the bureau ended the cattle gathering because of serious concerns about the safety of employees and the public and would work to resolve the matter administratively and through the courts.

About 100 Bundy supporters, many wearing camouflage and carrying firearms, gathered on Sunday with the family for an informal church service at a makeshift protest command center.

Speakers offered a mix of prayer and religious testimony, denounced the federal government for excessive oversight on several issues, and called for the preservation of individual constitutional rights.

An Arizona state representative in attendance, David Livingston, said the battle over the Bundy cows would serve as a unifying event for lawmakers across 11 western states working on state sovereignty issues.

"This was a major tipping point," Livingston said.

Cliven Bundy, 76, said he had been touched by the supporters who stood by his family over the past week.

"I was really quite humbled to the fact that there are so many good people," Cliven Bundy said.