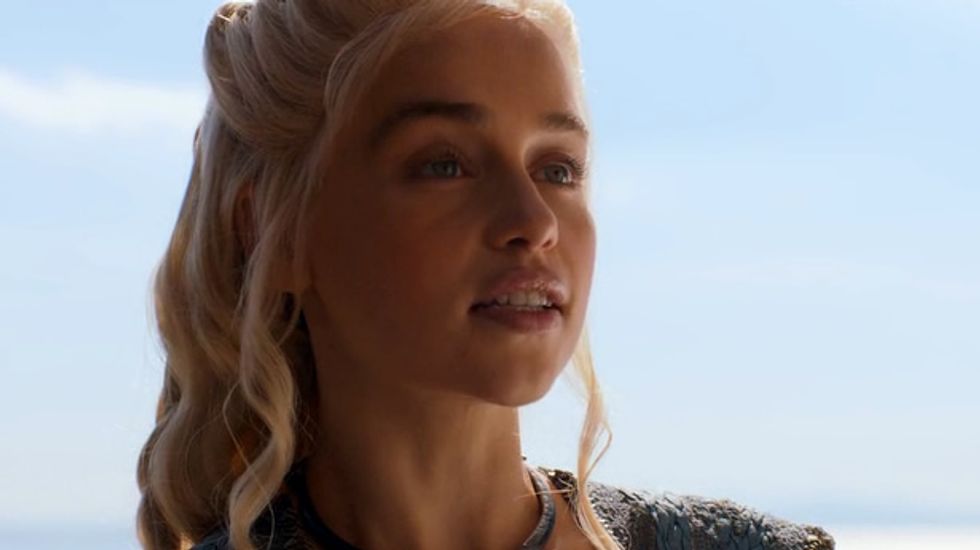 Last night's episode of Game of Thrones opened with what's become an increasingly common scene: one of teaching. In this case, the lesson is how to speak the common tongue, because it makes no sense to walk around shouting "Kill the Masters!" if no one can understand what you're saying.

Grey Worm -- in what must have been painful, given the previous conversation -- then dons slave-chains and sneaks into Meereen to meet with some rightfully disgruntled, but nonetheless revolt-wary slaves. In a rousing speech, he informs them that "all men must die," and after talking up the mighty power of Daenerys, Mother of Dragons, tells them not to expect any help from her.

Which was, apparently, the right thing to say: 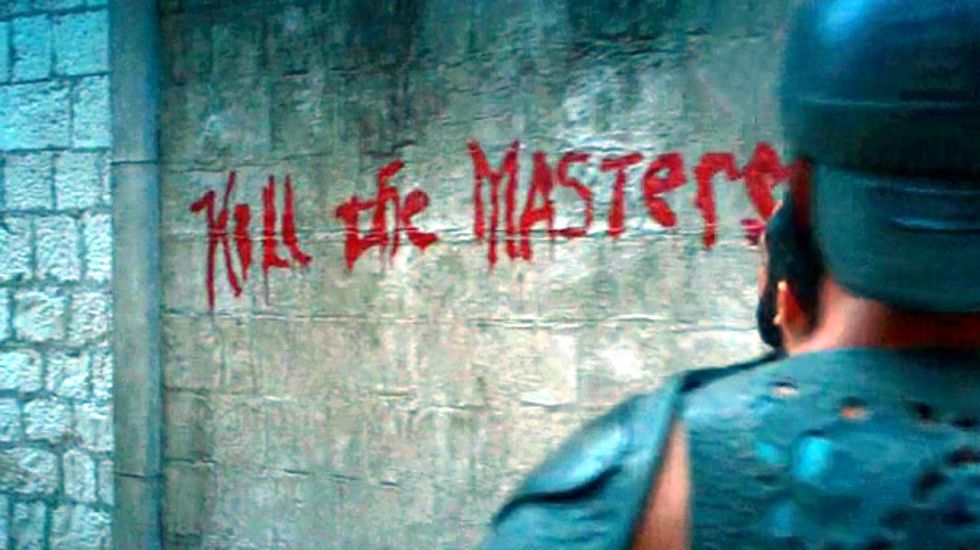 The slave revolt -- which director Michelle MacLaren dispensed with in all of two minutes -- is successful, but for the first time Dany isn't directly playing the role of "white savior." She may have inspired this revolution, but she's not about to go crowd-surfing on the broken backs of the emancipated this time, because as Grey Worm informed the slaves, "no one can give you freedom, you must take it."

Unless, as we learned in previous episodes, you have dragons, then you can take all the freedom you please.

Once victorious, Dany rounds up all the slave-masters and tries to figure out what to do with them. She's advised that she should "answer injustice with mercy," but the slave-owners of Meereen crucified themselves, so to speak, when they crucified their slaves one-per-mile-style on the road to Meereen. Dany chooses to answer "injustice with justice" and do to them what they did to their slaves.

Meanwhile, in Westeros, Bronn continues to teach Jaime how to fight left-handed, but the humiliation isn't limited to Bronn stealing his right hand and slapping his "ass to dirt" with it. Like a good Catholic or Jewish mother, Bronn decides to use guilt to convince Jaime to visit his brother Tyrion in prison.

Just like the last time we saw them, when Jaime and Tyrion meet up, they do so as equals. Director MacLaren seats Jaime far enough away from Tyrion so the two can make direct eye contact: 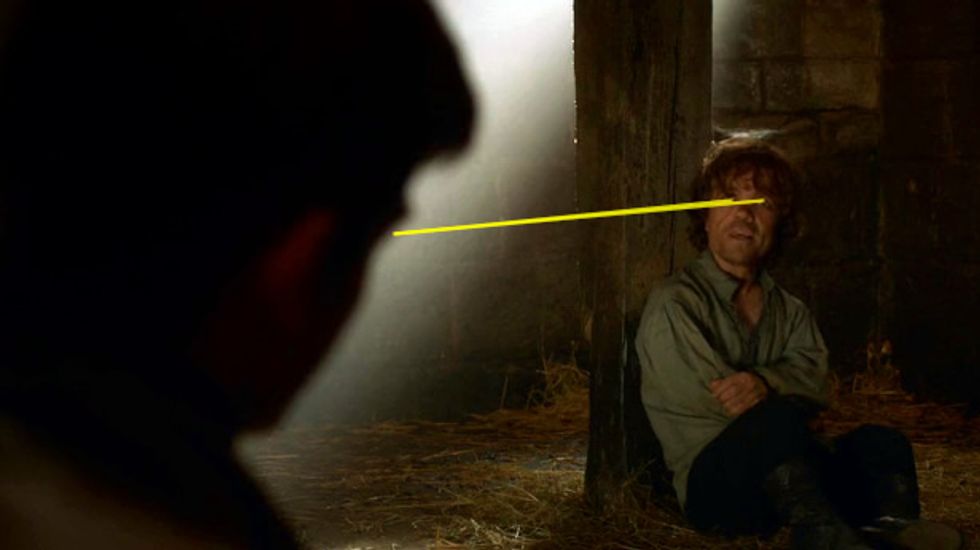 If anything, Tyrion's situated a little higher than his brother, but only because he's sitting on the moral high ground. He insists that his wife, Sansa, couldn't have killed Joffrey, because she's "not a killer, at least not yet anyway."

Cut to Arya, the Stark girl who is a killer -- or so I expected, only to be disappointed, because MacLaren decided to stay topical and cut to not-a-killer-yet, Sansa, having the same conversation about who killed Joffrey with Littlefinger. He informs her that he played a role in Joffrey's death, and for the first time, we learn that Sansa's been paying attention.

She tells him that she knows Ser Dontos didn't slip the poison into Joffrey's chalice, because "you're too smart to trust a drunk." All those hours spent with her drunken, scheming husband weren't for naught -- but she's not at Littlefinger's level yet.

"A man with no motive is a man no one suspects," he tells her. "Always keep your foes confused. If they don't know who you are or what you want, they can't know what you plan to do next."

Which, of course, is just grand for the stability of the kingdom, given that it's also being undermined by the likes of Olenna and Margaery Tyrell.

Then it's back to the Wall, where Jon Snow is behaving like it's his first day of school, except this time Snow's not the pupil, he's the master -- er, maester. At least he thinks he is, until Alliser Thorne reminds him of his station. It's not a steward's job to train the new recruits, after all.

Also, Locke's at the Wall, which means there's a mole in the Wall, and worse still, Snow seems inclined to trust the Bolton's mole. That can't bode well, especially given that the Lannister's already have their Wall-mole, Janos Slynt, firmly entrenched there. It's almost as if the show runners don't want you to forget he's half a Stark, and therefore twice as likely to die.

Given that he raped her in the previous episode, it shouldn't be surprising that Cersei and Jaime's conversation is a little stiff and stilted: 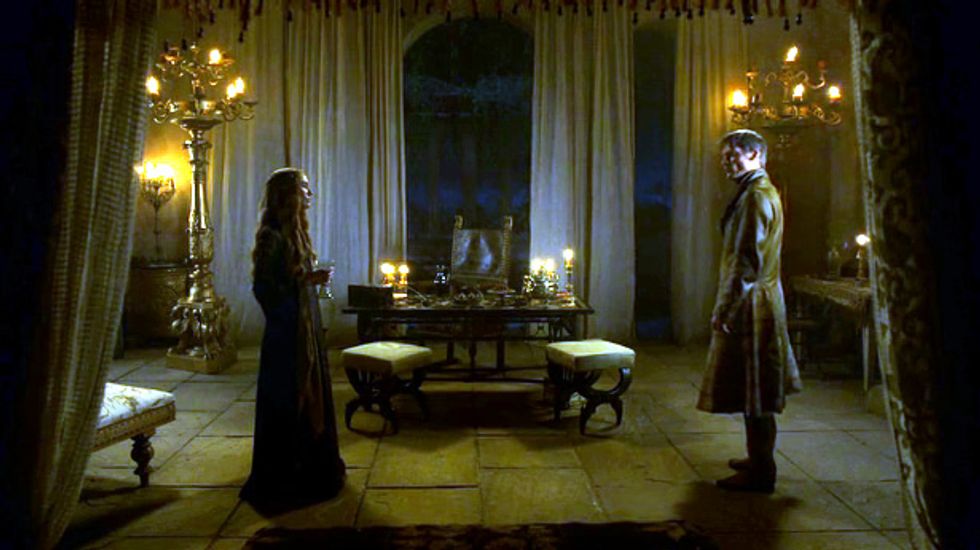 The formality of MacLaren's staging here is downright stultifying -- it literally looks like they're on a stage with the curtains pulled back. The composition is straight from Masterpiece Theater circa 1973, and with good reason, given how little chemistry these two currently have, what with their son being dead and all.

Speaking of which -- now that Tommen's to be the new king, you'd think Jaime would station some of his men outside his surviving son's door to prevent the likes of Margaery from sneaking in. In a sweet scene -- if a disturbing, given the age difference -- Margaery informs Tommen in a language that he'll understand that while she likes him, she could easily see herself liking liking him.

She then strokes his cat, Ser Pounce, in an act that a Freudian would have a field day with -- unlike the next scene, in which Jaime lets Brienne play with his sword. There's nothing metaphorical to see here, people, move along, move along!

But Sansa's not the only one learning to be devious in this episode, as Jaime unloads all his responsibilities upon Brienne, who must rescue Sansa to keep her oath to Catelyn Stark, and care for Podrick so Jaime can keep his oath to Tyrion.

She then names her sword "Oathkeeper," and given that that's also the title of the episode, suggests exactly how much faith the audience should have in the human characters on this show -- unless that character is Jon Snow, who has kept all his oaths, except for the ones about not abandoning his brothers and sleeping with the enemy.

In a significant deviation from the novels, Sam tells Snow about his brother, and then -- coincidentally -- Snow's ordered to go to Craster's Keep, where the real oath-breaking former men of the Night's Watch are still playing Deadwood.

"I was a fucking legend in Gin Alley," Karl informs the assembled traitors, or as he likes to call them, "you fucking cunts." He's no fonder of the last of Craster's children, a baby boy, who leaves in the woods as a "gift to the gods."

In those woods -- coincidentally -- are Bran Stark, Hodor, and the Reed siblings. Bran takes his direwolf Summer out for a joyride and crashes him into a pit, but he caught a glimpse of his half-brother Jon's direwolf, Ghost, right before he lost control, so the lot traipse off to Craster's Keep, where they hear a baby.

Before they can act, however, they're captured. Hodor is tortured for information, but he's only saying "Hodor," so it takes the-fucking-legend-of-Gin-Alley a few beats before he realizes who exactly he's captured. He vows to ransom the boy off to Castle Black, but -- coincidentally -- representatives of said castle, led by Jon Snow, are already on the way.

The episode concludes with a scene that's only implied in the books -- the white walker birthing ritual. Because it's on Game of Thrones, the scene occurs in a circle, and because this episode is director by former Breaking Bad producer MacLaren, it must involve a blue that's bluer than blue. The set-up is brutally epic -- the extreme long shots leading up the white walkers' lair, the long shots of him entering the ritualistic looking circle of frozen stalagmites: 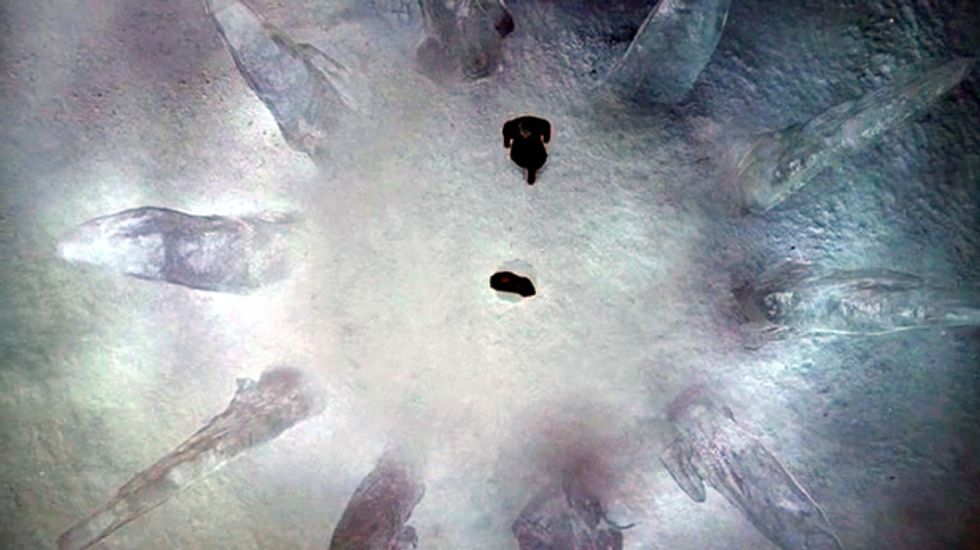 And then the white walker reaches toward the baby: 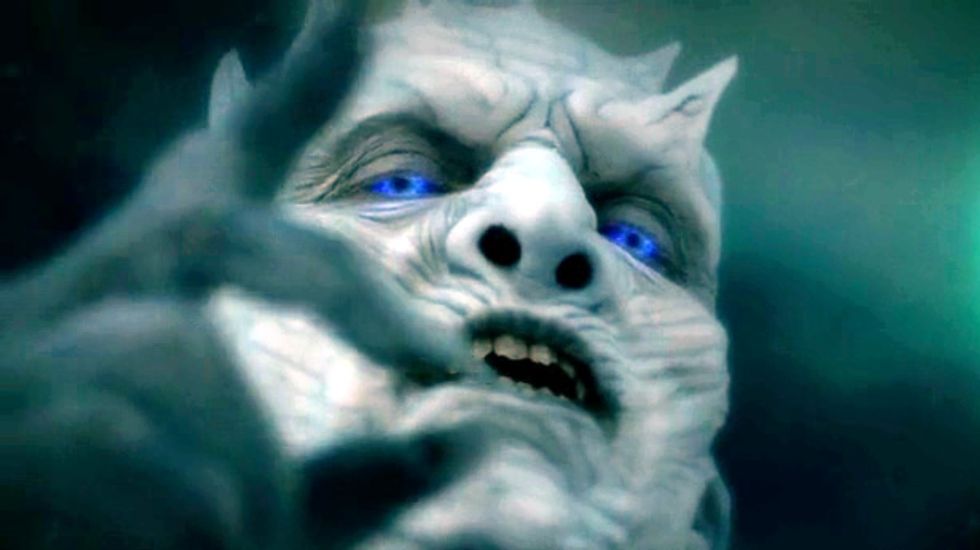 Wait -- what the Hell is that, and why does it have horns?

No doubt, all will be explained in next week's episode.

Appearing on CNN Thursday, Haberman said that the testimony lines up well with what Trump was saying publicly about Pence even as rioters stormed the Capitol and chanted for him to be hung.