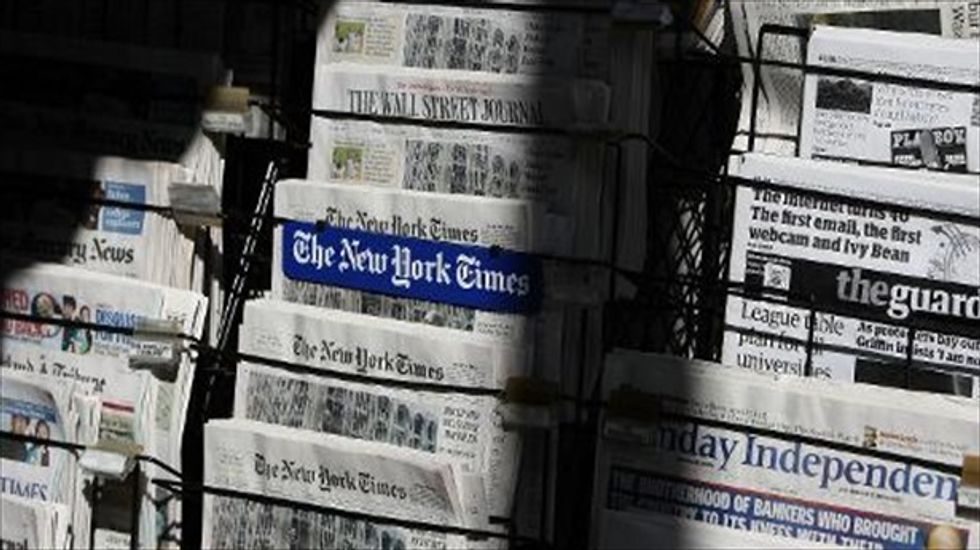 Newspapers are displayed at a newsstand on Oct. 26, 2009 in San Francisco, California [AFP]

U.S. newspapers suffered further revenue declines in 2013, seeing only mixed success in a transition to digital, according to industry figures.

Total newspaper industry revenue amounted to $37.59 billion in 2013, a 2.6 percent drop from $38.60 billion in 2012, according to a report released Friday by the Newspaper Association of America.

In one positive sign, the data showed a 3.7 percent increase in circulation revenues to $10.87 billion, helped by digital subscriptions and "paywalls."

The figures showed revenue from all digital sources including advertising, circulation and marketing, rose 5.8 percent and accounted for 12 percent of total industry revenue.

But newspapers continued to see declines in print advertising, which has long been their most important revenue source.

Advertising in the traditional printed daily and Sunday newspaper decreased 8.6 percent to $17.3 billion. Digital advertising only partly offset that, rising 1.5 percent to $3.4 billion.

Poynter Institute researcher Rick Edmonds said the overall performance of the industry was the best since 2006.

But Edmonds noted that because the trade association made changes in how it calculates figures, using different sources of revenue in the computation, "total industry revenue figures for the last two years cannot meaningfully be compared to those for earlier years."

"Though digital ad revenue gains again failed to make up for print revenue losses, there was mildly encouraging news on that front," Edmonds said in a blog post.

"Despite continued downward pressure on prices and tough competition from digital giants with virtually no news operations, the industry eked out a gain."

- Not 'calamitous' but unimpressive-

Others say the figures don't tell the full story of the bleak state of the newspaper industry.

"I think what this report says is that the newspaper business has to find ways to innovate itself out of the mess in which it finds itself," says Dan Kennedy, a journalism professor at Northeastern University.

"Although these figures are not calamitous, they are not all that impressive either."

Alan Mutter, a former newspaper editor who now is a consultant specializing in new media ventures, said total ad revenues for the newspaper industry have been cut in half since a 2005 peak at $49 billion.

Mutter said the key problem for newspapers is that they are not keeping pace with the competition for digital advertising -- as most of the revenue shifts to non-media companies like Google or Facebook.

"Digital advertising rose a mere 1.5 percent to $3.4 billion in 2013 at the same time that digital sales surged 17 percent across all digital categories in the United States," Mutter writes in a blog post.

"Back in 2003, newspapers had a 14 percent share of the national digital advertising market. In 2013, they had barely eight percent of the market."

Mutter added that "the ongoing inability of newspapers to compete effectively in this emerging marketplace may be an even bigger problem than the traumatic collapse in print advertising that they have suffered over the last eight years."